Homenewsheres everything you need to know could nano xno be dead 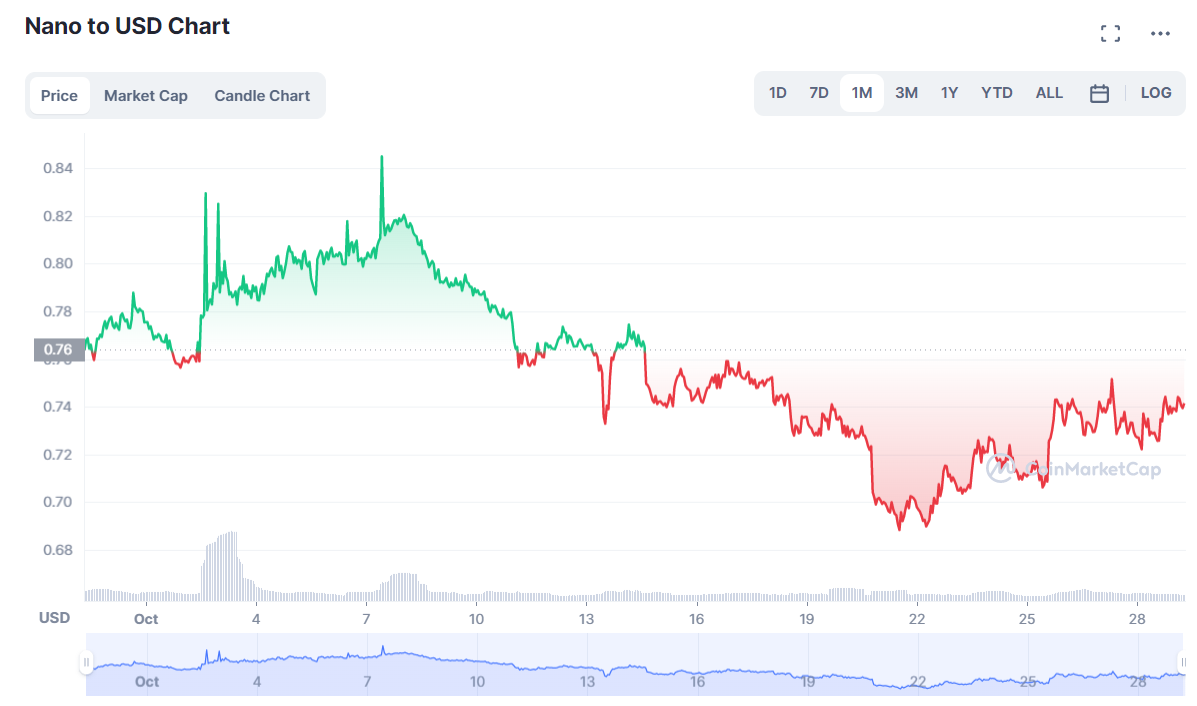 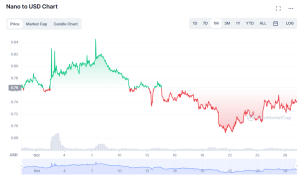 Nano XNO (formerly NANO, XRB) has plummeted 94% from its highest. It was previously thought to be one of the greatest cryptocurrency utility providers, offering transactions that were incredibly quick and basically free. Many people had the assumption that NANO was indeed the coin that might have actually replaced traditional money on a daily basis.

Analysts disagree on whether NANO was capable of making the most of its first-mover advantage given the flood of competing crypto tokens that have since entered the market. The success of any cryptocurrency adoption is a crucial aspect in its overall success.

With a significant increase in market capitalization since its previous position, NANO (XNO) is now ranked #199.

A decentralized peer-to-peer cryptocurrency system for transactions called Nano (XNO) permits rapid and inexpensive transactions on the ledger. Users can send and get payments in Nano in a matter of seconds due to the usage of a block-lattice data structure and a unique decentralized voting system.

Because NANO cryptocurrency networks try to provide remedies for the constraints and flaws of Bitcoin, the first cryptocurrency ever established, they are referred to as altcoins, or alternative currencies (BTC). Because Bitcoin relies on miners to validate blocks and transactions and employs a Proof of Work consensus process, it makes transactions expensive. This is because mining requires a significant amount of electricity and computing power. Bitcoin microtransactions may take several hours to validate and finish, and the transaction fees for these kinds of payments can be rather high.

With its technology and alternative technological approach, Nano solves this issue. Like Bitcoin, Nano is built on a blockchain and a decentralized infrastructure, but with significant changes in the consensus process chosen.

According to a recent research by Allied Market Research, the market for cryptocurrencies worldwide is expected to grow to $4.94 billion by 2030. The following years will be crucial for the world and Bitcoin, the research claims.

Nano aims to give the world a worldwide, decentralized digital money that empowers most marginalised people without charging them and is environmentally benign. Since its debut, Nano has handled over $42 billion without charging a single cent.

The debate over Bitcoin’s energy consumption in the cryptocurrency world is primarily about advancement, not about who is right or wrong. It has always been the case with technology advancement through the ages that if a better option emerges, you utilize it. Statements like “it utilizes renewable energy, thus it’s OK” or “it’s fine since the energy being used has already been generated” are frequently used in discussions on the energy used by the Bitcoin network. This leads to a positive feedback cycle of support and misinformation.

It doesn’t really matter whether the defense’s assertions are factually false. Argument is that additional innovation is required if a recently developed technology, whether it be Bitcoin or not, is not focused on a sustainable energy future for the entire planet.

According to the team’s and community engagement on GitHub, social media, and their own website, the answer seems to be “Yes”. Their forums on Reddit and Telegram are likewise inactive, having far lowest participation levels since 2017. But, NANO Coin is still listed on all significant exchanges, showing that NANO is not a finished project.

All of this adds up to one conclusion: while NANO experiences trust deficit with its user base and large number of people dumping their tokens, NANO can end-up in a death spiral which can paralyze this cryptocurrency forever.

Price will be strongly influenced by what BTC develops, and because many analysts believe BTC will not be making any substantial improvements this year, it is unlikely that NANO will either. Depending on the team’s activities, a prospective technical breakthrough, or a significant alliance, the price will likely remain unstable and will show a steady depreciation.

How Good is Nano as an Investment?

In the same way as all other cryptocurrencies, Nano is a volatile investment. Because of the strong team, the compelling use case, and the well-designed tokenomics, the chances of it going up are greater than their chances of going down. In addition to that, it has a community that is active as well.

Is Nano Prone to Failure and Price Drops?

Various factors cause cryptocurrency initiatives to fail. The most typical ones include: a team going rogue and abandoning the project; regulators declaring it illegal; press exchanges calling for it to be delisted; a lack of media attention; more successful competitors; a lack of a well-designed marketing strategy; a loss of community support; a potential protocol vulnerability; failing to meet the protocol’s anticipated minimum development activity; and failing to draw in new developers to build on their platform.

In the far future, according to many crypto analysts, the price of Nano will skyrocket and reach $7.45.

In the Near Future, What Can We Expect from Nano?

Check out IPMT – a Different Cryptocurrency Focused on the Environment.

The visionary concept behind the creation of NANO as becoming one of the first environment and energy conscious was something that attracted the majority of its customer base. Eliminating the requirement of mining to validate transactions and replacing it with independent running softwares connected with the block was an out of the box idea.

Due to poor adoption of NANO because of multiple reasons, NANO has become a decaying project, and is being taken over by new and extensive crypto projects like IMPT which have similar goals but is taking a different approach

The IMPT initiative is incredibly unique since it offers customers ways to get carbon credits, including the ability to buy them on the IMPT.io marketplace or while they shop. In this way, everyone can contribute to the battle against the climate issue, not just big enterprises and corporations.

In order to assist people in mitigating their carbon impact while just shopping, IPMT has collaborated with more than 10,000 of the largest businesses. The portion of each brand’s sales margin that is allotted to impact initiatives varies. Till the user has enough IMPT tokens to buy a carbon credit, the selling margin is kept in the user’s account as IMPT tokens. The IMPT.io carbon marketplace also allows users to purchase carbon credits directly. Users of the IMPT.io portal can pick from hundreds of environmental initiatives that have already been vetted.

The ability to sell, retire, or keep carbon credits as an investment will be provided to users. Additionally, users will get rewards from the site for retiring their carbon credits. Users would obtain one-of-a-kind NFT souvenirs made by artists after burning their carbon credits, according to the project’s concept. The IMPT.io social network encourages and rewards people and businesses for taking better care of the environment.

Microsoft and Amazon have Embraced the IMPT Sustainable Affiliate Programme

The strong list of businesses who have signed up for the affiliate shopping network gives investors in the initiative hope. Retailers including e-commerce behemoth Amazon, prestigious names like Macy’s and Bloomingdale’s, as well as names like River Island, Microsoft, and Lego. Connecting businesses and individuals who wish to offset their carbon footprint with socially conscious products and companies is the declared objective of IMPT.

IMPT.io is using state of the art blockchain technology to make carbon cancel-out and trading easily available to everyone in order to accomplish this goal. Each merchant contributes a percentage of the sales made using the IMPT.io desktop widget or Mobile app. The amount of the donation to the verified environmental, social, and governance (ESG) projects that have been chosen by the merchant is up to them.

In order to choose from among the various sales margins offered by each retailer when it comes to green initiatives, consumers will need to compare the sales margins offered by their favorite retailers. With the widget or app on IMPT.io, IMPT tokens can be earned when someone uses them to shop in-store, which can then be converted into carbon credits when someone uses them during the shopping process. 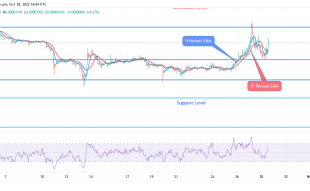