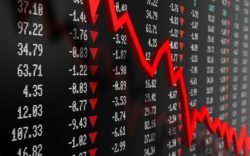 The coronavirus outbreak has had an incredible amount of fear, uncertainty, and doubt (FUD) spread across the entirety of the world’s financial industry. Everything from stocks to bonds, to oil and cryptocurrencies, were affected, causing an overall market crash that could be written in the history books. Bitcoin, in particular, managed to crash to its worst day in a full seven years of its history. However, the price drop was just the tip of the iceberg for this FUD induced disaster.

So Much Sell-Off That It Crashes The Market

The overall volatility skyrocketed, but the volumes did as well. The entire infrastructure of crypto trading as a whole was strained to its maximum as every crypto holder and their parents, children, and pets wanted to sell their crypto for something a bit ‘safer.’

Futures exchanges, in particular, saw cascading, self-fulfilling liquidations that were triggered electronically for leveraged positions. The grim irony is the sheer amount of liquidations caused a further collapse in the market, and spreads between exchanges managed to jump to the clouds. There were at least two major exchange platforms that buckled under the pressure, going down from the sheer amount of traffic. These exchanges’ investors were locked out of the market for over an hour, letting their assets suffer for it in the process.

Volumes and Volatility Topping The Charts

Bitcoin’s price managed to drop like a stone, going down almost 40% in a single day on the 12th of March. This is the most significant recorded drop that occurred on a single day since the spring of 2013 but luckily managed to climb back up by 16% a day later.

Volatility has been at its highest recorded in seven years, with volumes across the various major crypto exchanges blasting up by $30.8 billion during the 12th and 13th of March, as shown by CryptoCompare, a data provider for the industry. These volumes stand amongst the four highest two-day totals ever recorded in the crypto industry.

As everyone started to lose their heads and sell anything that they can get their hands on, the Gemini New York exchange went offline for a little under 90 minutes. BitMEX, one of the largest crypto derivatives platforms in the world, went down twice, with a collective downtime of about 45 minutes.

A spokeswoman for Gemini was quick to step up, explaining that the exchange had “observed a technical issue” that subsequently impacted a “subset” of the exchange’s customers. She further explained that, through an “abundance of caution” and to ensure the safety of the “integrity of our marketplace,” BitMEX paused its market to resolve this issue. BitMEX then proceeded to resolve this issue, bringing its market services back online in a “healthy state before reopening.” It’s pretty easy to hear the PR-speak leaking through, there.

Join Our Telegram channel to stay up to date on breaking news coverage Venezuela ...