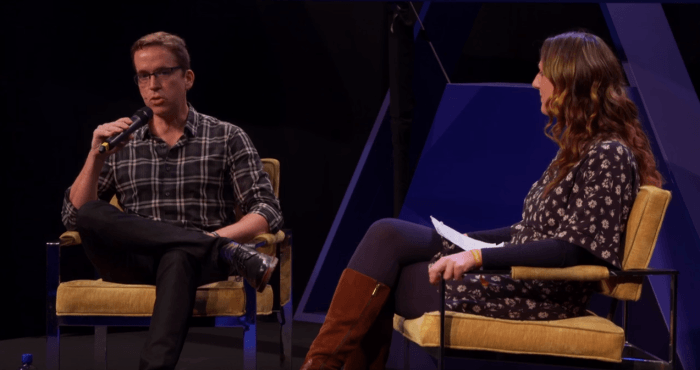 Circle, a mobile payments company, has received a bit of criticism in the Bitcoin community lately due to a perceived pivot away from the digital currency. Although the payments application previously had a larger focus on bitcoin, new user accounts are now denominated in US dollars by default — at least in the United States. This has been viewed as a move away from Bitcoin by some observers, but according to Circle, the company’s vision for payments has been constant since the platform was first launched in 2013.

Circle Co-Founder and President Sean Neville was interviewed by Irish Times Journalist Pamela Newenham at Web Summit in Dublin, Ireland earlier this month. During the conversation, Neville was able to clarify his company’s position on Bitcoin and blockchain technology.

Circle is Not a Bitcoin Company

The first statement made by Sean Neville during his discussion with Pamela Newenham was that Circle does not view themselves as a Bitcoin company. Neville used an analogy involving Amazon to make his point:

“When we founded Circle, the intent was never to create a Bitcoin company. We look at Bitcoin as a very powerful, enabling technology, so an analogy we use is Amazon isn’t an HTTPS company — they didn’t set out to found an HTTP/SSL company. It was an enabling technology that allowed them to do the things they wanted to do.”

It’s clear that Circle view themselves as a payments company first and foremost, but they acknowledge that the Bitcoin blockchain is what enables certain features of their platform. Circle Founder and CEO Jeremy Allaire has written about the importance of the Bitcoin blockchain on many occasions in the past.

Neville went on to explain Circle’s overall vision in the payments space. At first, he talked about how money doesn’t work as seamlessly as everything else on the Internet today:

“If I want to share a photo or if I want to share my opinion with you in writing, I can do that in a number of very free, global ways without any worry over identity theft or how long it takes my message or photo to reach you. But if I want to ask for money attached to that photo or opinion or if I want to send money to you, then it’s this whole other stovepipe system that doesn’t work the way the Internet works.”

Neville then described how Circle wants to allow individuals to move money to any device in any country around the world, and he noted that the Bitcoin blockchain is what enables this type of functionality to exist:

“What we wanted to enable was sending money across any currency, any device, [and] any platform. We wanted that to work the way everything else already does on the Internet. And it’s not necessarily a new idea, but when we looked at blockchain tech, and Bitcoin specifically, we certainly think that maybe now is the time we can finally make this happen for people around the globe.”

While traditional digital payment systems come with a large amount of regulation that can disrupt the user’s experience, Bitcoin allows individuals to gain access to a global, open, and permissionless payment network by simply downloading an app on their phone.

You Need Bitcoin for Blockchain to Work

Circle President Sean Neville also touched on the ongoing debate of whether blockchain technology can be useful without the need for an underlying token or digital commodity such as bitcoin. In his view, bitcoin is needed to power Bitcoin as a settlement network that can be used by anyone anywhere in the world:

“There’s a sort of thing of, you know lately, blockchain tech versus Bitcoin, which is a little bit silly. I think someone has to value the commodity in order for transactions to be settled.”

Many Bitcoin startups seem to be moving away from a Bitcoin-centric model when it comes to marketing, but that does not mean these companies are abandoning the peer-to-peer digital cash system. In many cases, it simply makes more sense to tell the consumer why the app or service is useful to them rather than explain all of the intricacies of Bitcoin.