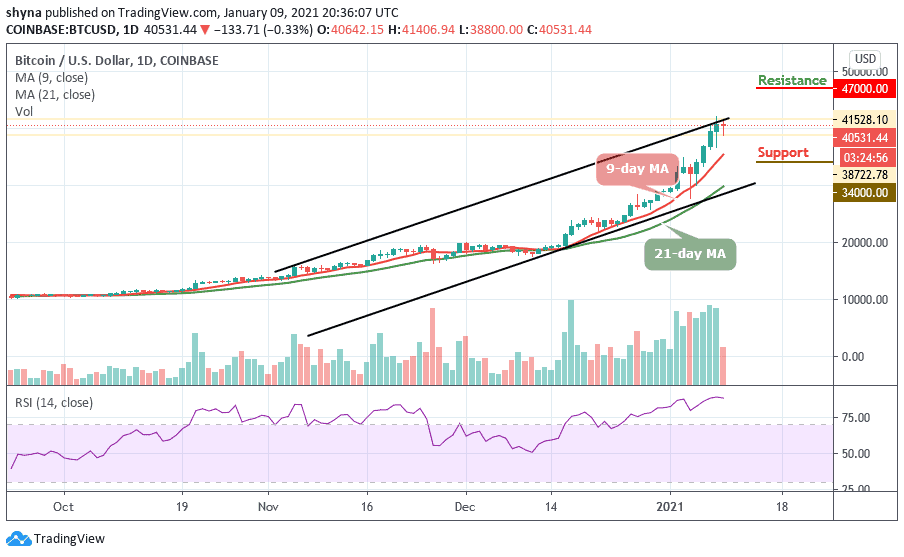 The Bitcoin price briefly hit over $41,900 yesterday but it’s now finding it difficult to test that level again.

BTC/USD is currently wildly fluctuating around the $40,500 level as the bulls and bears are engaged in a furious tug of war. Looking at the daily chart, if the bulls do take control, but according to the technical indicator, they may not face any strong resistance levels all the way to $41,000 because the RSI (14) has gone up further in the overbought zone and it is hovering around 89-level.

Yesterday, the Bitcoin price briefly hit the $41,986 level, the highest it’s been since the beginning of this year. At the opening of the market today, after testing the low of $38,800, the coin is currently trading at $40,531. Meanwhile, looking at the market movement, there is likely that the market may experience a quick retracement or sell-off just after touching the crucial $41,000, and traders may see $38,000 to $37,000 being tested again before pushing higher.

BTC/USD is still performing well on the 4-hour chart. With this, we expect the coin to gain the lost momentum and hit the trade above $41,000. However, the volatility hovers, and the selling pressure still exists which leads the coin not to be able to cross above the upper boundary of the channel. Meanwhile, the $38,000 and below may come into play if BTC breaks below the 9-day and 21-day moving averages.

However, in as much as the buyers can still reinforce and power the market, traders can expect a retest at the $40,900 resistance level, and breaking this level may further allow the bulls to reach $43,500 and above. The RSI (14) is seen trading around the 67-level, suggesting a sideways movement.