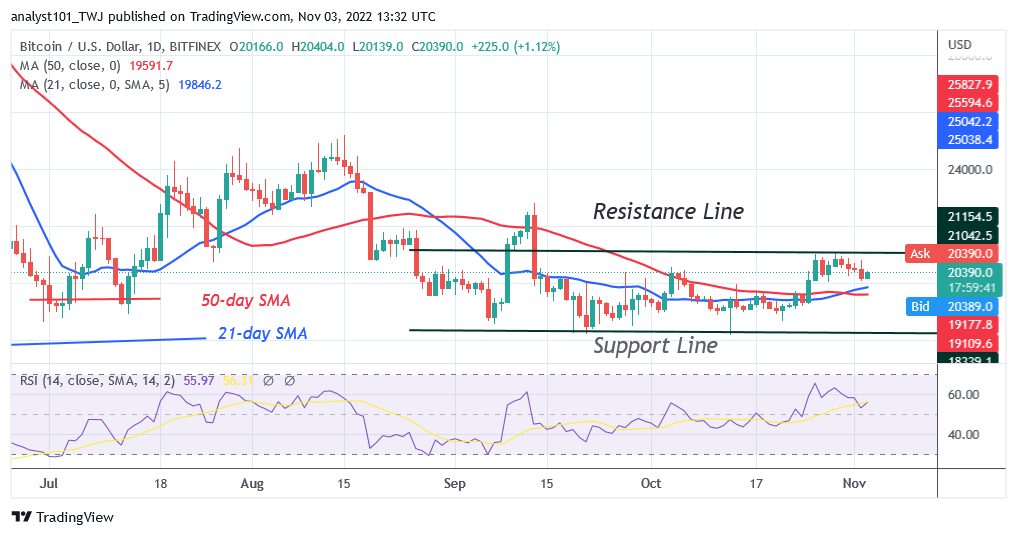 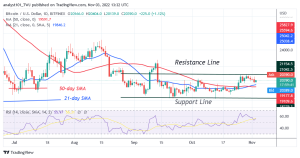 Bitcoin Price Approaches the Current Support with a Potential Drop to $19.8K – November 3, 2022

The simple line is that if buyers are unable to get through the initial resistance at $20,400, the bitcoin price could experience more declines.

Bitcoin’s (BTC) price is currently trades just above the $20,000 psychological price level. Its previous rising movement has met resistance below the $20,400 price level after the recent dip above the $20,055 support. It follows that the BTC price will fluctuate within a small range.

The current support will be under pressure as a result. Bulls buying the dips was not enough to stop bitcoin falling to a low of $20,055 on November 2. Buy buyers fought back to propel bitcoin  to a high of $20,400.

The upward correction is running into difficulty as Bitcoin drops from its most recent high. The $20,400 resistance level has led to a fall in Bitcoin, with the price now fluctuating within a limited range between $20,000 and $20,400.

If buyers succeed in breaking through resistance at $20,400, the BTC price could rise back to the previous high of $21,022.

However, if Bitcoin declines from the current resistance position, the $20,000 support level would be broken. Bitcoin’s rangebound movement will then resume between $18,800 and $19,900 price levels.

Microstrategy CEO Reiterates His Belief That Bitcoin Price Is a “Long-Term” Play – Potential Drop to $19.8K

Bitcoin bulls were looking for some buying support coming in from the MicroStrategy results announcement, but have been disappointed.

Microstrategy is the largest publicly traded corporate Bitcoin owner in the world. It declared that as of the end of Q3 2022, it still possesses 130,000 BTC. It claims that this sum, or almost $4 billion, or $30,639 per Bitcoin, was paid for the acquisition of 0.62% of every Bitcoin ever owned.

As its CEO declares that it would continue to buy and hold Bitcoin over the long term, the largest corporate Bitcoin holder in the world has reduced its losses in comparison to prior earnings.

Phong Le, the President, and Chief executive officer of MicroStrategy, reaffirmed the company’s long-term holding plan during an earnings call, saying: “We have not sold any Bitcoin to date. To reiterate our strategy, we seek to acquire and hold Bitcoin for the long term. And we do not currently plan to engage in sales of Bitcoin. We have a long-term time horizon and the core business is not impacted by the near-term Bitcoin price fluctuations.”

As a result of the rejection at the $20,400 high, Bitcoin is currently sliding with a potential drop to $19.8K. The $20,000 support will probably be tested again by the cryptocurrency. Bitcoin will revert to its former range-bound range between $18,800 and $19,900 price levels if the current support level is broken.

If you are on the hunt for a coin with a better risk-reward ratio than bitcoin right now, then Dash 2 Trade could be the candidate.  In its continuing presale, Dash 2 Trade has so far raised more than $4.4 million.

In a vote of confidence in the crypto, which is building an analytics and signals platform for crypto traders, a couple of days ago it disclosed that LBANK will list D2T shortly after the presale ends. 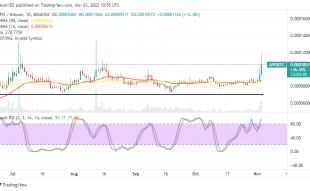 API3 Price Prediction: API3/USD is Attempting to Moon, Up 18%

Join Our Telegram channel to stay up to date on breaking news coverage API3 ...