Homenewsbitcoin price prediction as btc flirts with fresh breakout towards 25500

Bitcoin has pulled a little lower on Sunday, with the world’s largest cryptocurrency by market capitalization last changing hands just under $24,500, down about 1.5% on the day. That means Bitcoin has now pulled about 4.0% lower versus the weekly highs it printed on Saturday in the mid-$23,000s.

Profit-taking is being cited as the main driver of Sunday’s drop, though reports that international payments processor SWIFT is to block USD transactions to Binance that are below $100,000 might also be weighing. This move by SWIFT it expected to make it far more difficult for retail investors to buy cryptocurrency on the world’s most widely used exchange, as it removes an important fiat-to-crypto on-ramp.

Nonetheless, Bitcoin is still on course to close out the week more than 7.0% higher, taking this month’s gains to more than 35%. That means January is on course to be Bitcoin’s best since October 2021, even though there are still nine more days to go.

Unsurprisingly, the latest Bitcoin rally has generated plenty of excitement and debate. Many bears continue to view the macroeconomic backdrop (Fed still hiking interest rates as the US heads towards a likely recession) as not having sufficiently improved to warrant the recent rally.

Other disagree – the rapid ongoing drop in US inflationary pressures (as per recent CPI, PPI and wage growth data) suggests that the Fed will soon (i.e. in late 2023/2024) have room to begin easing interest rates to support the struggling economy, they argue. Bond markets certainly seem to believe in this narrative, with US yields having fallen significantly in recent weeks – a trend that is normally good for crypto.

$BTC printed a rare weekly RSI bullish divergence. Never happened in $BTC history, a once in a life opportunity.
Technicals were there, charts were screaming bottom but as usual majority was in full bear mode.

Plenty of technical and on-chain indicators also suggest that the bottom might be in. Technical analysts have noted that Bitcoin recently printed a rare bullish divergence of the weekly Relative Strength Index (RSI). A bullish divergence in the RSI happens when the RSI drops into oversold as prices print a bottom. Prices then hit a new bottom (perhaps a few weeks later), but the RSI prints a higher lower.

Others have cited factors such as Bitcoin’s recent big push to the north of its 200-Day Moving Average and Realized Price as key signs of a longer-term momentum shift. Bitcoin also appears to be following exactly in the footsteps of a multi-year market cycle that has been in play since 2015.

Days left until the top if we just carbon copy the cycle timeframe again: 1001 days pic.twitter.com/KoNZxJRuy5

Where Next for BTC?

Bitcoin’s impressive breakout above the $21,500 resistance level (which is now a support area) earlier this week, despite Bitcoin’s 14-Day RSI remaining in highly overbought territory, suggests that bullish appetite remains strong. Traders are now waiting to see where Bitcoin can repeat a similar breakout to the north of the $22,700 resistance area. While prices have temporarily pushed above this level in recent days, a sustained push has not yet been accomplished.

US data out next week (flash PMIs for January and December Core PCE inflation figures) could further bolster expectations for Fed easing in late 2023/early 2024, thus providing further macro headwinds for crypto. A sustained pushback above $23,000 would open the door to a rapid test of the next major resistance area around $25,500.

FGHT can also be used in peer-to-peer fitness wagers. FightOut’s FGHT tokens are currently selling for 60.06 per 1 USDT, and interested investors are encouraged to move fast to secure their tokens, with the pre-sale having already raised nearly $3.2 million in just a few weeks. FGHT is the token that will power the FightOut crypto ecosystem.

RIA, the token that will power afterlife fantasy-themed NFT battle card game Calvaria, is also currently in presale. The play-to-earn (P2E) crypto gaming start-up has raised close to $3.0 million in just a few months since the launch of its pre-sale. Only around 7% of its tokens remain up for grabs.

C+Charge has just started its pre-sale of the CCHG token that its platform will use to pay at EV charging stations. Tokens are currently selling for $0.013 each, though by the end of the presale, this will have risen by 80%. Investors interested in getting in early on a promising environmentally friendly cryptocurrency project should move fast, with the project having already raised over $350,000 in just a few weeks since the presale launch. 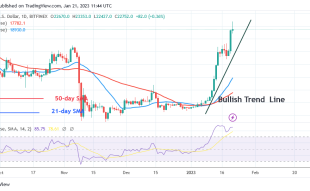