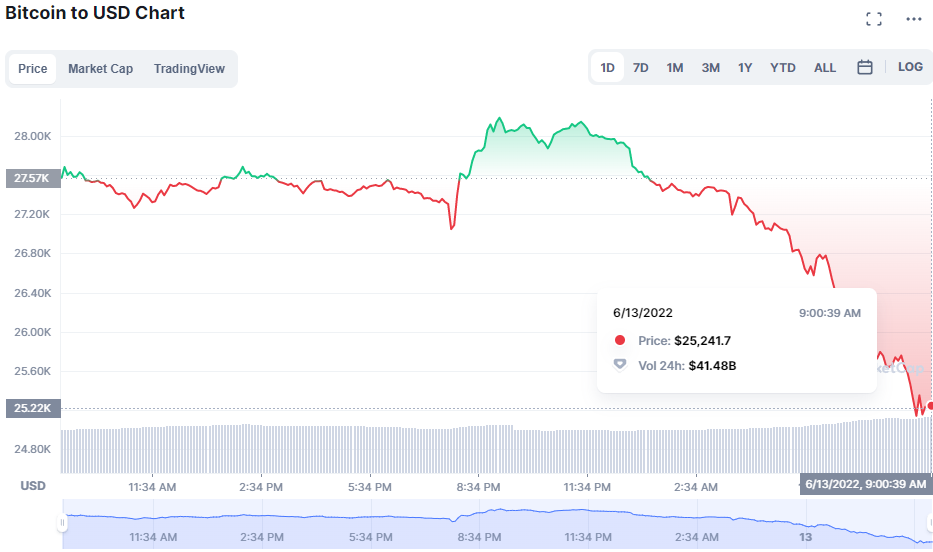 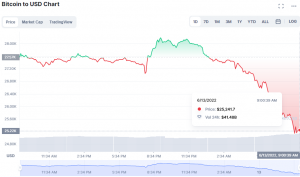 Bitcoin falls below $26k amidst rising inflation tensions. Is it the end, or we are yet to see the low point?

Bitcoin has seen new lows since the beginning of June alone. Fears of those were realized pretty soon who dreaded that the world’s leading crypto would fall below $30k. And it did.

It is now taking other cryptocurrencies down with it.

Bitcoin finds new lows and then goes lower than $26k

Still nursing their wounds from the BTC losses of Friday, investors took a defensive stance against Bitcoin.

The token recently traded around $26,700k – leading investors to reassess their faith in BTC and move to safer currencies. The results of those apprehensions are now for all to see.

At the time of writing, Bitcoin is trading at $25.6k. It seems like the unprecedented has happened, and now BTC might be heading towards the early 20s price point.

It is more than enough to make people think twice before investing in cryptocurrency.

As Altcoins track Bitcoin, especially during the bearish market, most of them have found lows that some investors believe to be the bottom. For instance, Chainlink is trading at $5.99 at the time of writing, and it is down 9.85% in the last 24 hours.

The same has been the case with the world’s most “favourite” cryptocurrencies, such as Cardano and Solana, as they are down by 9.03% and 9.81%, respectively.

The current inflationary economy has caused new concerns about the survivability factors of crypto.

Not All Altcoins would realistically survive – Bitbull Crypto fund Manager

Observing the rising inflation concerns and the regulatory roadblocks that are likely to increase to impede the growth of crypto this year, Crypto Fund Manager of BitBull, Joe DiPasquale, has said –

“Only a small number of altcoins can realistically survive such market movements and even fewer are likely to see all-time highs in terms of price.”

The market and the general crypto crowd seem to agree with Joe’s evaluation, as most of the cryptocurrencies have not been able to reach near the fraction of their all-time high values this year.

Highest rise in CPI in the past four Decades

The indirect of the index’s uptick has been on the equity markets. Tech-focused Nasdaq has tumbled by 3.5%, and the S&P500 and Dow Jones Industrial’s averages were down by 2.5%.

The rising inflation has made many re-evaluate their standings who previously believed that Bitcoin is their way to hedge against inflation.

Bitcoin has been in the red almost twice as often as it has been in the green over the past month. Current wicks show bearish engulfing patterns, with the readings reaching -6.51% on Sunday. Fear has driven more and more people to give away their Bitcoins, and probably at a loss. Such trends are getting increasingly worrisome.

Fuel Prices and High-Interest Rates are to blame?

Bitcoin is now at the lowest it has ever been, and expectedly, fingers have started to point towards the reasons.

The most prominent among them is the Russia-Ukraine conflict, a disruptor that has managed to damage the economy the most.

The CPI reported that the airline fares rose by 12% since the Russia-Ukraine conflict has had a direct impact on fuel prices.

The summer season is one in which people travel a lot. It has also had an impact on gasoline prices, which have topped $5 per gallon.

Rising prices have dropped consumer confidence in most equity and crypto assets – the University of Michigan reports. It said that the consumer sentiment is at the lowest in the past 14 years, and customers are looking for other options to invest in.

The Entire Crypto Market is down amidst Free Fall

A multi-trillion crypto-economy now rests at $1.11 trillion. With prices of popular cryptocurrencies dropping by 50,60 to almost 80% of their all-time highs, people are asking if this is the year the needle wins and the bubble bursts.

However, the Twitter traders have the same reaction as they always do. They’re not scared that most can see how much in denial they are:

No, #bitcoin is not crashing. Yes, I’m doing fine. Great actually. No, I’m not worried. Yes, I heard about Luna. No, I can’t tell you more about it bc I don’t care to know more. Yes, I’m still stacking. No, I don’t plan to stop.

That being said, Bitcoin enthusiasts are not afraid to make of the current situation – especially around Shitcoins.

It has been a trend on Twitter to exaggerate the market trends for the sake of going viral. The truth of the matter is that people are still buying or holding Bitcoin because they believe in it.

Belief is how the crypto market is still standing. The investors are not alone in harbouring that feeling. The CEO of Coinbase has said that Bitcoin has a chance of becoming a new global reserve currency.

The current inflation is the impact of the COVID 19 lockdown that forced America to create fresh new currency notes. Now that the world has opened, the US is in the self-correction mode. How long Bitcoin would continue to drop in value might directly be proportional to the time it takes to get the economy back on track.

Until then, market experts are saying varying things about the Crypto market.

BTC is currently in its learning phase, and government policies and regulations are still working their way around accepting. Some, like the USA and El Salvador, welcome it with open arms. And then there are those like India, who are doubtful about the whole prospect of Decentralized Finance.

We recommend that investors keep a close watch on IB news as we consistently keep you updated so that you can stay ahead and make informed decisions at all times. 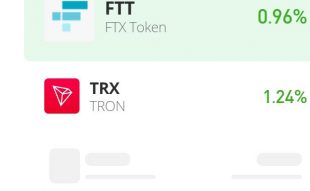