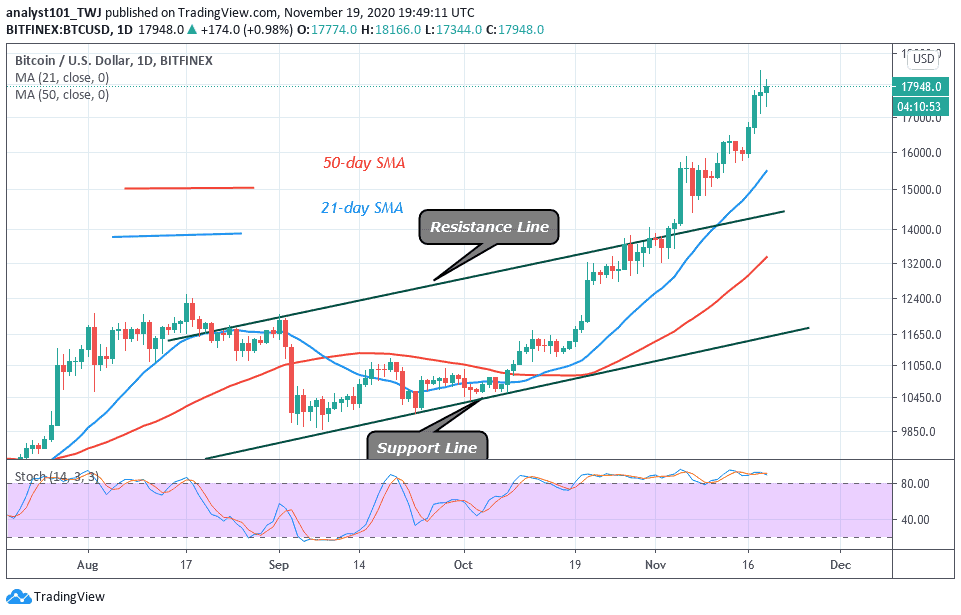 The recent price surge to $18,500 was met with a sharp downward correction. In the process of correction, the crypto has formed a price range between $17,300 and $18,200. For the upside momentum to resume, the price must be sustained above $17,500. This will provide a continuous retest of the $18,200 resistance. In other words, if the price consolidates above $17,500, it will increase the possibility of a breakout near the resistance zone.

On the upside, if the price breaks the $18,200 resistance, Bitcoin will resume a fresh uptrend. The coin will rally above $19,000. Similarly, if the bears break below the $17,300 support, Bitcoin will drop to $16,400 low. In the meantime, BTC has continued to be range-bound within the tight range. BTC is above the 80% range of the daily stochastic. It indicates the overbought condition of the coin.

Digital Currencies Can Be Part of “New Monetary Order” by Andy Haldane
Andy Haldane is the Bank of England (BOE) policymaker. He is the bank’s chief economist and sitting member of the Monetary Policy Committee. On Wednesday, November 18, he gave a public lecture at The CityUK 10th Anniversary Conference. Andy Haldane believes an extensively used digital currency could have a positive impact on financial stability. The Bank of England, or BOE, is expanding its assessment of digital currencies, evaluating how these assets could form the basis of a “new monetary order.”

Meanwhile, Bitcoin has to jump the hurdle at $18,200 resistance to continue the upside momentum. On November 18, BTC was resisted at $18,200. However, the retraced candle body tested the 78.6% Fibonacci retracement level. This indicates that the coin will rise and reverse at level 1.272 Fibonacci extension. That is the market will reverse at level $19,158.20.