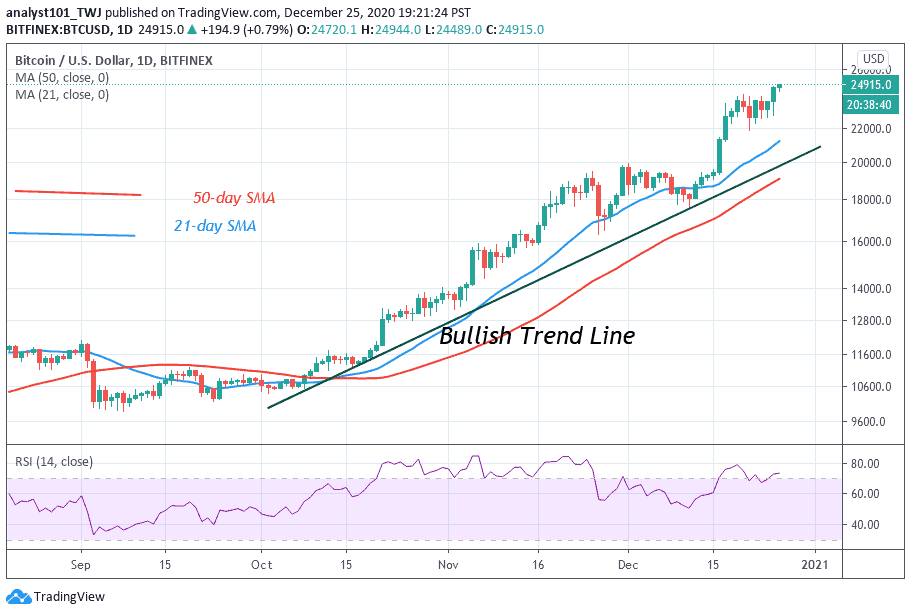 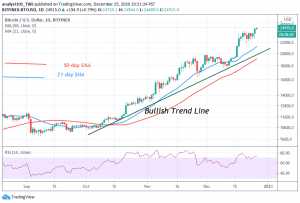 Bitcoin (BTC) Price Prediction – December 25, 2020
BTC/USD bulls have broken the $24,000 overhead resistance. This overhead resistance has been put to test for the past week without success. Today, the price broke the overhead resistance as the market reached a high of $24,722. Sellers reacted to push the coin to $22,800 low. A strong buying pressure at the lower price level overwhelms the bears.

Certainly, the BTC price has rallied above the $25,000 price level. Analysts believe that once the $24,000 resistance is breached, BTC will rally above $25,000. However, it is unclear where the next resistance or the direction of the coin will be. The market sentiment around Bitcoin remains awesomely positive, as many institutions buy Bitcoin to hold. On the upside, if the price rally above $25,000, then the major resistance will be $30,000. Meanwhile, Bitcoin is above the 80% range of the daily stochastic. It indicates that BTC is in a strong bullish momentum.

Tradingviem GM Explains the Rationale Behind Bitcoin Bullishness
According to Pierce Crosby, “What goes up must come down? Not so fast”. He said Bitcoin must have been stalled below $24,000 but the future remains bullish. He said: “The performance recently may seem parabolic, but there are no near-term negative events we expect. This makes for a bullish base case on price.” He said Bitcoin broke its 2017 price level of 19,892 and later retraced by $1,000. After consolidation, BTC price resumes another upside momentum to break the psychological price level of $20, 000.

Bitcoin bulls have taken the coin to a new high with no historical price levels remaining above $20,000. Crosby, however, remains unsure about the other altcoins. He said: “Altcoins I have less confidence in, especially as the rotation into ‘majors’ happens,” he said. “Majors” refers to the share of cryptocurrencies holding large market caps. “We could expect a rotation back to altcoins in the spring, but unfortunately for altcoin lovers, Bitcoin is on a stronger footing relatively speaking.”

Meanwhile, the Fibonacci tool has indicated the upward movement of the coin. On December 25 uptrend; a retraced candle body tested the 61.8% Fibonacci retracement level. The retracement indicated that the coin will rise and reach level 1.618 Fibonacci extensions. That is the high of $25,775.40. 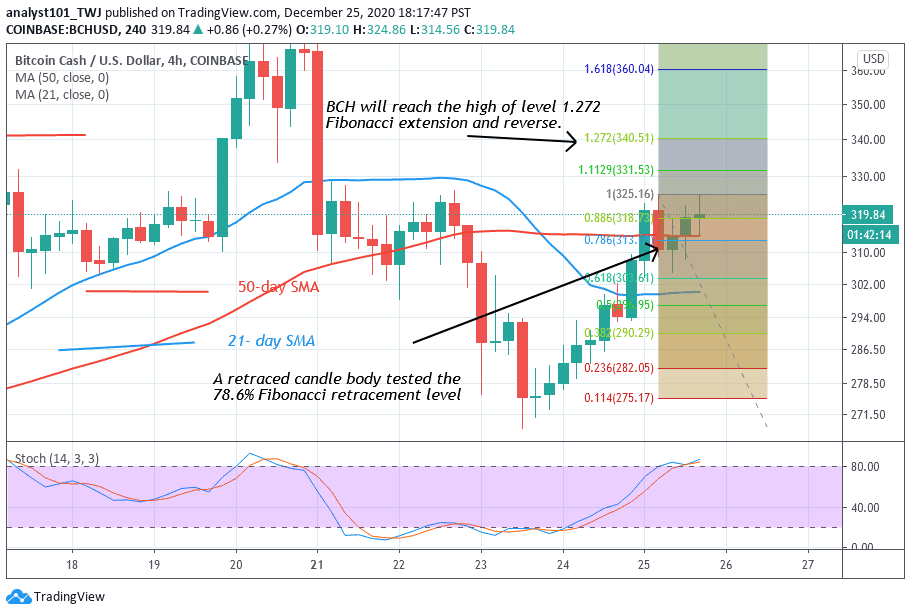