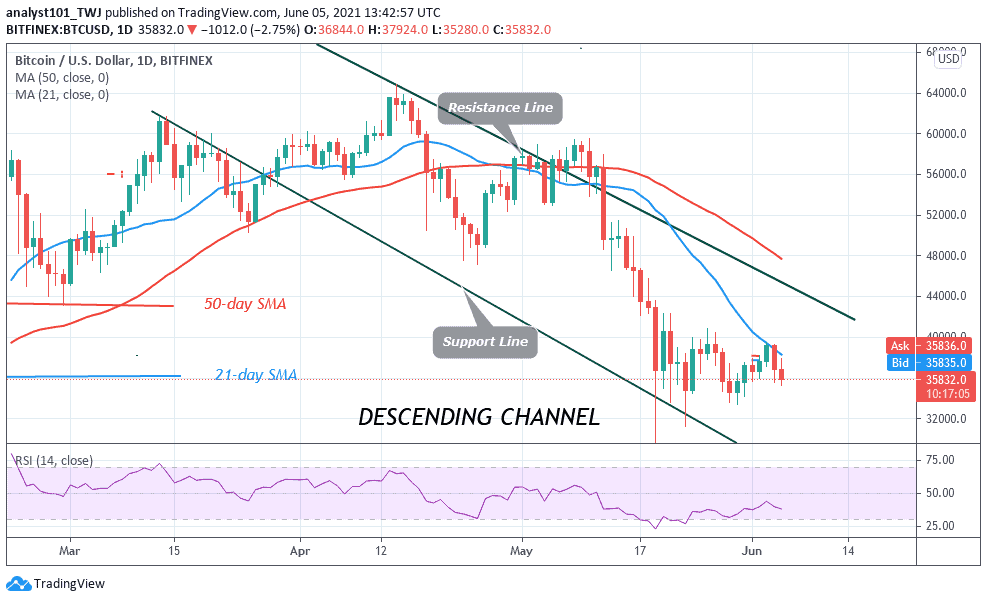 Since June 4, BTC/USD has been falling after the rejection at the $39,000 high as Bitcoin trades above $35,000. Buyers have been attempting to sustain the BTC price above the $39,000 resistance but were repelled. It becomes possible for Bitcoin to fall after the rejection. BTC’s price has fallen to the low above $35,000. BTC’s price has been hovering above the $35,000 support.

Bitcoin’s (BTC) price has commenced the resumption of a downward move. The king coin fell from the high of $39,000 to the low of $36,500. The coin retested the $38,000 high before resuming downward. This price action implies that Bitcoin is likely to fall to the low of $30,000.

The bottom line is that if Bitcoin falls to $30,000 low, it becomes liable to further depreciate to the downside. Nevertheless, if the BTC price falls to the previous low at $30,000, then the bears may want to sink the coin. Bitcoin risks deeper correction on the downside if the $30,000 supports crocks. BTC /USD is trading at $35,873 at the time of writing.

Bitcoin Event in History as Bitcoin 2021 Kicks off in Miami – Bitcoin Trades above $35,000

The Bitcoin 2021 main conference day has commenced in Miami. The event is anchored by Mayor Francis Suarez, Twitter CEO Jack Dorsey, MicroStrategy, CEO Michael Saylor, and many others. Bitcoin 2021 was scheduled to Miami earlier this year as mayor Francis Suarez adopted Miami as the “world’s cryptocurrency capital.”

“Mayor Francis Suarez is making a play to establish Miami as the Bitcoin capital of the world, so naturally he’s asked us to bring the largest Bitcoin conference in history to his city, as soon as it’s safe for attendees and residents,” the event organizers said in March.

The biggest Bitcoin event in history has a sold-out crowd of at least 12,000 attendees in Miami. The attendance includes some of the world’s biggest industry players. According to reports, the conference will be one of the largest crypto gatherings to emerge following the COVID-19 pandemic.

Meanwhile, Bitcoin price has continued to hover above $35,000 support, despite the initial breakdown and subsequent retest at the previous high. According to the Fibonacci tool analysis, Bitcoin is expected to revisit the previous low at the 2.618 Fibonacci extension or level $30,078.50. From the price action, Bitcoin has been trading marginally above the $35,000 support.