Homenewsbank of england sends delegate to international conference on cbdcs 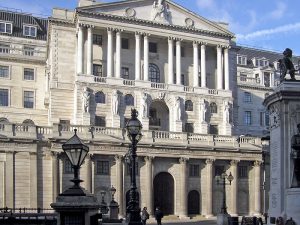 The Bank of England (BoE) has joined the collection of central banking institutions to take active roles in examining a currency digitization policy. This week, the BOE is slated to appear at a meeting of central banks designed to discuss the dynamics of possible Central Bank Digital Currencies (CBDCs).

Discussing Pathewys for a CBDC

The meeting, which would be hosted by Official Monetary and Financial Institutions Forum (OMFIF), will involve delegates from central banks across the Netherlands, Switzerland, and Hungary. The discussion will also host Sky Guo, the chief executive of enterprise-focused blockchain platform Cypherium, and Cimon Scorer, a Senior FinTech Specialist for the BOE.

The meeting will focus significantly on the possible benefits that blockchain and CBDCs could have on member countries’ economic growth. Each delegate will present their institution’s findings and opinions on CBDC development, based on research that they’ve begun. Research presentations will cover smart contracts for money and interoperable blockchain models that work between and across borders.

Guo explained that this is the perfect time for progressive discussions on CBDCs, as they’re still in their early development stages. He added that by understanding their benefits and drawbacks, central banks could design CBDC solutions that will work for their countries and specific economies. On the importance of these discussions, the OMFIF also explained that private-sector firms had pipped most central banks on CBDC development. As they see it, central banks have come to take the initiative and run with it.

Sending a delegate to such a meeting shows the BoE’s seriousness about issuing a possible CBDC. Last month, Bloomberg reported that Andrew Bailey, the agency’s Governor, had appeared at a student webinar and confirmed that they were looking into launching a Digital Pound. As he pointed out, the agency was trying to make a perfect iteration of a CBDC, as rushing to take the plunge would significantly impact the country.

Bailey reportedly emphasized that care is now more critical, with the British economy in a delicate position following the coronavirus and Brexit. However, a CBDC is a possibility, and they’re looking into it.

“We’ll go on looking at it, as it does have huge implications on the nature of payments and society. I think in a few years’ time, we will be heading toward some sort of digital currency,” he added.”

Many have touted England as a possible leader in CBDC exploits. Freedom from the European Union means that it is free to conduct CBDC research and development as it sees fit without considering the other countries in its economic bloc.

This freedom is something that countries like France might not enjoy so much. In May, the French Central Bank announced that it had successfully tested the digital Euro and was ready for the next phase. While it announced partners for the next phase last month, there is still the question of whether it would only allow the use of the asset within its borders or extend it to the entire EU.

Currently, France is looking into a CBDC that would only work for wholesale applications. That fact alone might not sit well with several other EU countries. It’s unclear how the country aims to navigate this problem, and much more.

Join Our Telegram channel to stay up to date on breaking news coverage Travala.com, ...