The cryptocurrency market is showing signs of recovery after a difficult month. The total value of all cryptocurrencies is up by 8% in the past couple of days, with ethereum (ETH), XRP and polkadot (DOT) leading the charge in the past 24 hours.

However, with many of the major coins rising high, we’ve picked the 5 best cryptocurrencies to buy at low prices. These include coins that are cheap as well as those that have potential to rise even higher.

Bitcoin (BTC) may be the most expensive coin in the market, but it’s still one of the best cryptocurrencies to buy at low prices. At $35,000, it has risen by 10% in the past seven days, and has held steady over the past 24 hours. 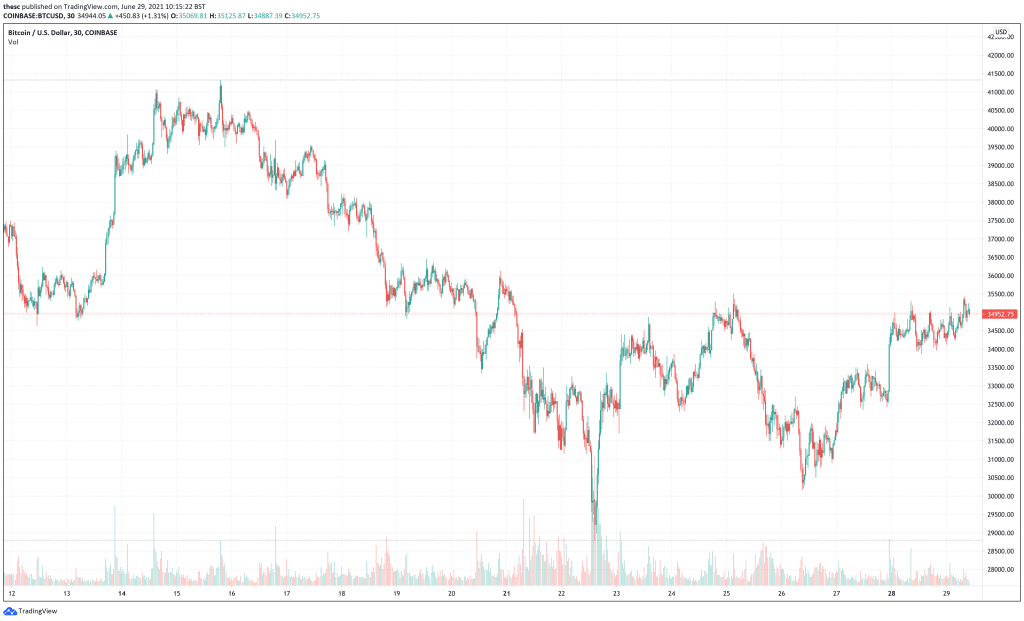 As the chart above illustrates, BTC remains down — by 14% — over the past 14 days. In other words, it has plenty of ground to make up, promising some nice gains in the process.

Research also suggests that it remains cheap relative to historical trends. For example, a Pantera Capital report form June 14 found that bitcoin was priced 36% below its 11-year historical trend line. This was when 1 BTC was worth about $40,000. So with bitcoin now at $35,000, the cryptocurrency is 44% below where the trend suggests it should be.

Basically, it’s cheap. As far as historical price data is concerned, bitcoin ‘should’ be more expensive. Which is why it’s one of the best cryptocurrencies to buy at low prices.

It’s also arguably the cryptocurrency with the best future prospects for adoption. Most recently, Mexico’s third-richest man, Ricardo Salinas Pliego, has revealed that the bank he owns — Banco Azteca — is working towards accepting bitcoin. Pliego had previously invested around 10% of his liquid portfolio into BTC. So his claims can be taken seriously.

Ethereum Classic (ETC) is a fork of the more familiar Ethereum (ETH) blockchain. Its native token ETC has fallen hard in recent weeks. Its current price of $51 represents a 69.5% drop from its all-time high of $167, set on May 6. However, it has rallied strongly more recently, surging by 20% in 24 hours and 27% in a week. 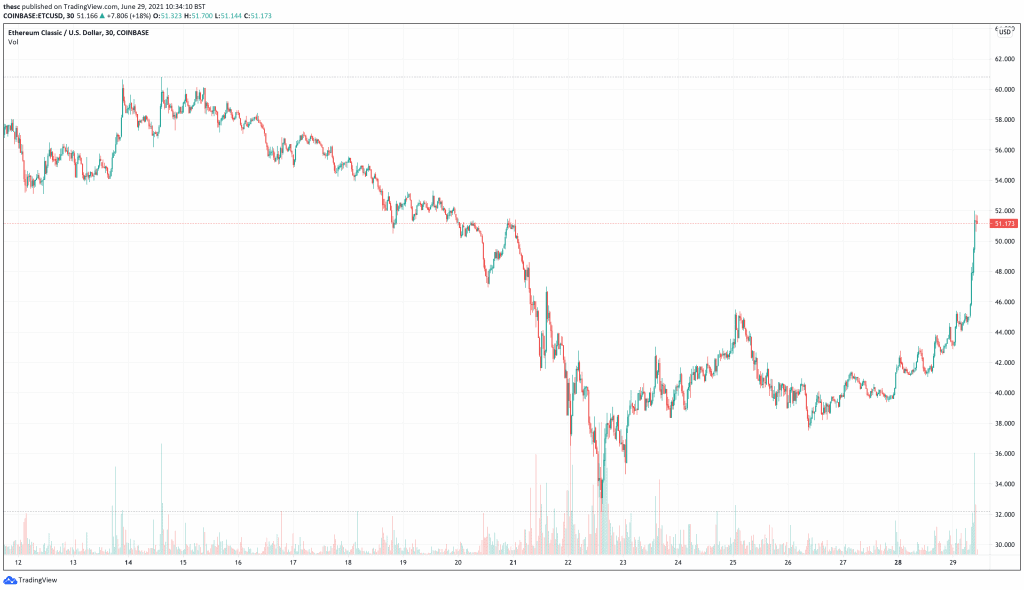 This short-term upswing highlights ETC’s potential. It remains underpriced relative to its ATH, and has fallen by 21% over the past 30 days. Nonetheless, it is the second-best performing cryptocurrency over the past 90 days, behind dogecoin (DOGE).

Ethereum Classic also has some positive news on the horizon that may boost its price. It has an important hard fork scheduled for late July. This will optimise the use of gas and allow for enhanced transactions, while also improving security. As such, expect the fork to buoy ETC’s price in the coming weeks. 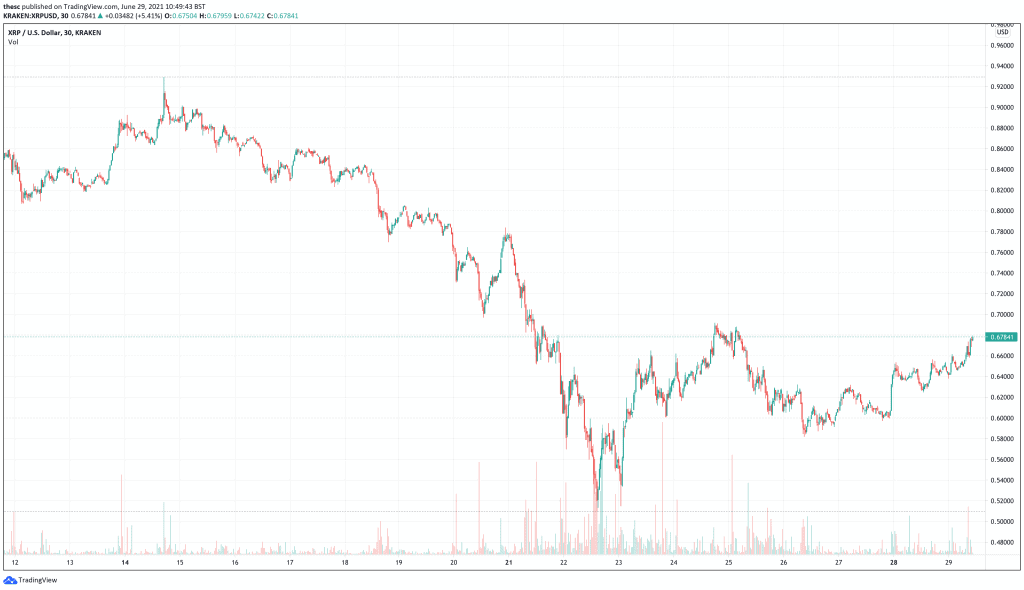 XRP is also massively down compared to its all-time high of $3.40. It set this ATH in January 2018, making it one of the few cryptocurrencies not to set a new ATH during the late-2020/early-2021 bull market. Nonetheless, while this may be disappointing for the coin’s fans, it also shows just how cheap it is relative to its history.

At the moment, the biggest thing happening with Ripple and XRP is the SEC’s case against it. The announcement of this case in December cut XRP’s price in half, particularly after exchanges delisted it. Fortunately, Ripple’s situation has improved since then, with several of the company’s requests and motion being granted.

This suggests that Ripple has a good chance of obtaining a favourable outcome. If it does, XRP’s current price of $0.677 will seem glaringly cheap. This is why it’s arguably one of the 5 best cryptocurrencies to buy at low prices.

Polygon (MATIC) is a cryptocurrency well-positioned to rise strongly with a full market recovery. Its price of $1.16 represents a 25% decline over the past fortnight and a 31% drop over the past month. It’s also 56% down from its ATH of $2.62, which was set on May 18. 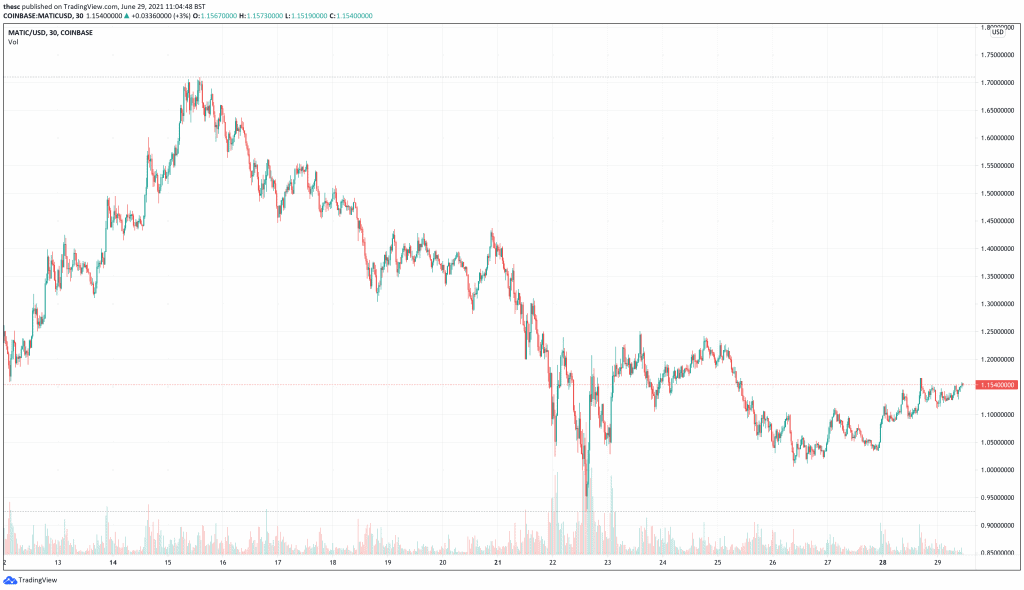 MATIC has enjoyed a small recovery in recent days. It’s up by just over 3% in 24 hours and by 5% over the past week. However, given how modest these climbs are (compared to other major coins), it’s clear that MATIC has plenty of space left to rise.

As a platform, Polygon is arguably one of the most exciting in the cryptocurrency sector. It has enjoyed a growing number of adoptions in recent weeks, with numerous apps joining its network. It has also rolled out various launches, such as its SDK for Ethereum-compatible blockchains and its new blockchain, Avail. Given how quickly it’s expanding, its current price likely offers a sizeable discount.

Internet Computer (ICP) is a cryptocurrency that received plenty of hype following its May launch. Unfortunately, it has had a tough time since then, falling from an all-time high of $700 to its current price of $47.72. This means it has fallen by around 93% since its ATH (set on May 10). Of course, while this might deter some traders, it also suggests that it could rebound very strongly in the coming months. 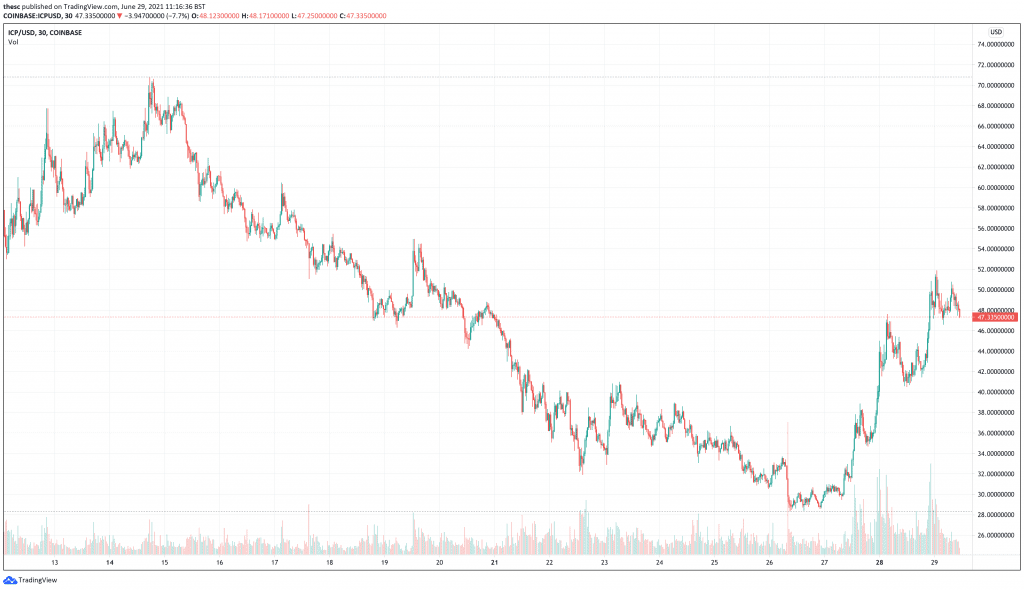 In fact, ICP has rebounded well in the past week. It has risen by 15% in the past 24 hours and 30% across the previous week. This underlines just how cheap it was more than a week ago, while it’s still arguably very cheap right now.

Indeed, as a platform, Internet Computer has enormous potential. Given that it aims to decentralise the cloud and offer a distributed internet, it could be huge if it ever truly gets off the ground. While it’s still early days in this respect, the platform has received plenty of serious backing. It raised $61 million from Polychain Capital and Andreessen Horowitz in 2018, while it also launched a $220 million fund in May for developers to grow its network.

It does, then, have a decent chance of success. And if it comes anywhere close to fulfilling its ambitions, $47 will prove a very low price indeed. 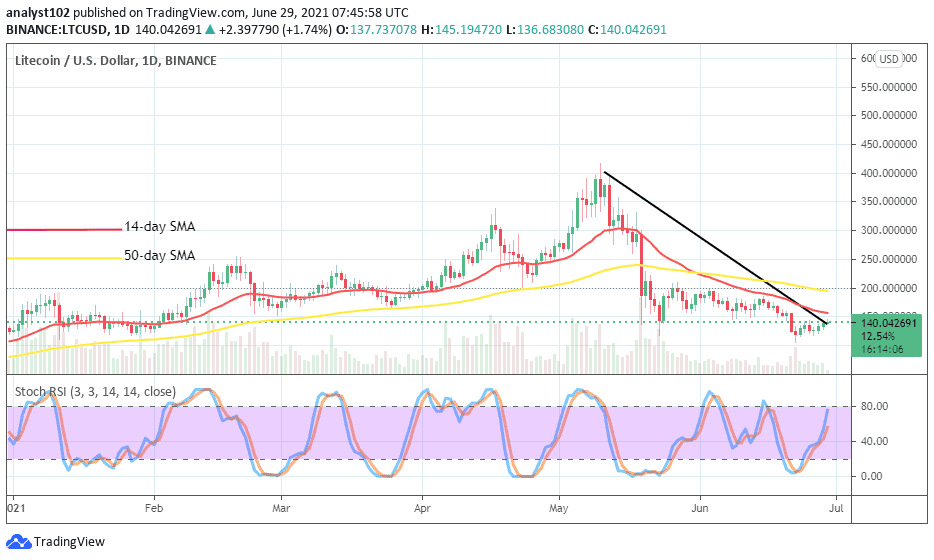