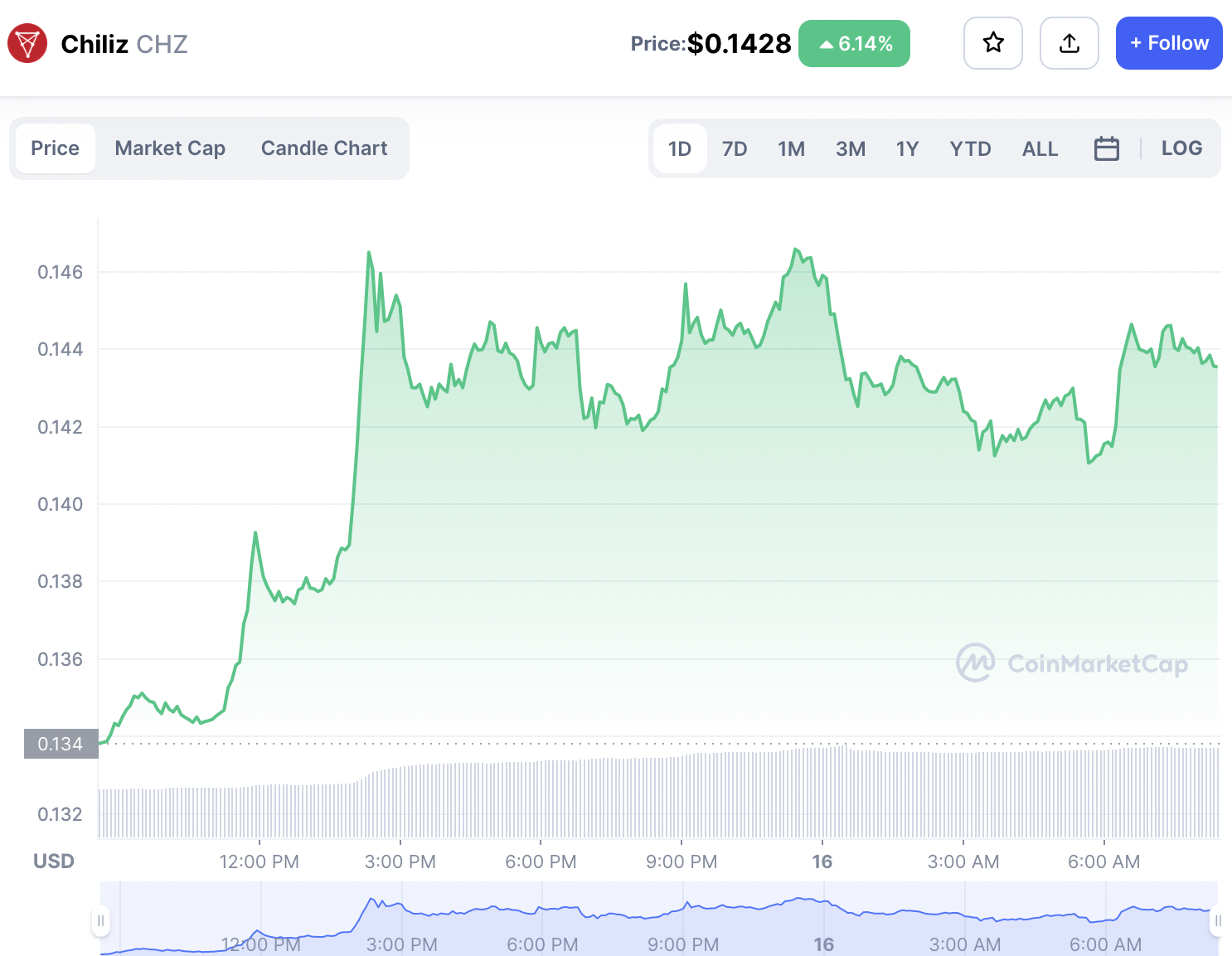 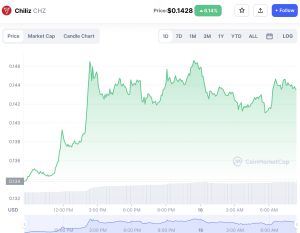 Chiliz, the renowned fan token, has leveraged the World Cup fever to rise by 7.35% in the last 24 hours with a live market capitalization of $881.9 million. At the time of writing, the Chiliz price accumulates in the $0.14 range. Will it keep up this momentum going forward? And what are the reasons that it is getting so much traction now?

Chiliz saw its fair share of volatility last week. After trading at a respectable $0.15 mark for a couple of days, the Chiliz price plunged to $0.134. It then proceeded to trade in the volatile zones until last night;  it dropped closer to $0.132 before a relief bounce that parabolically increased the Chiliz price. 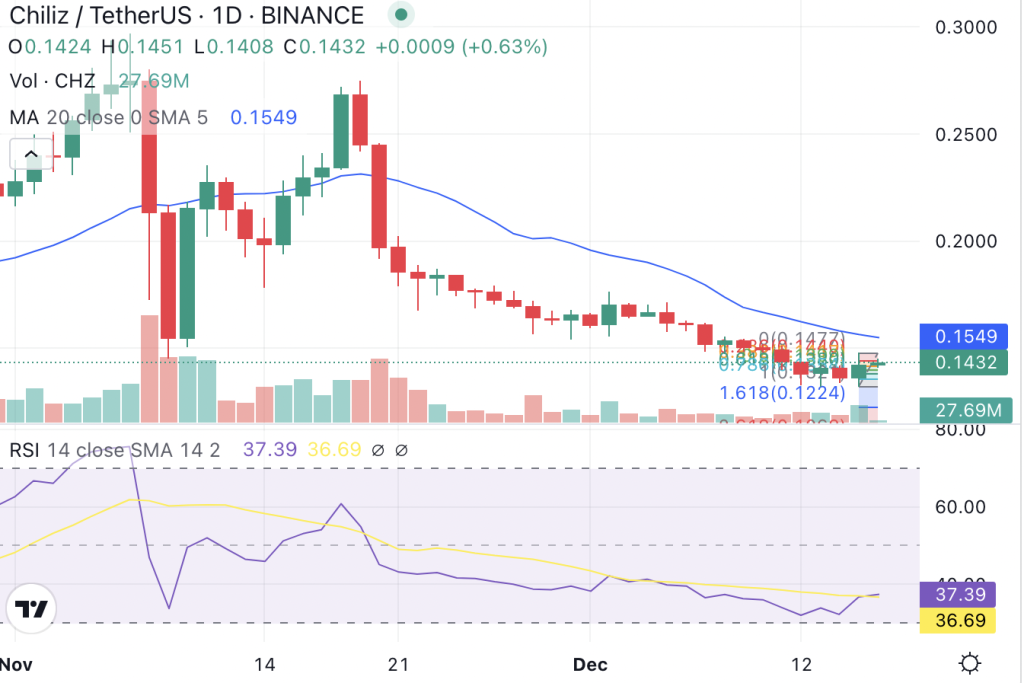 The recent uptick is good news since this fan token has traded in the bearish zone since the last days of November. Painting multiple red candles with buyers losing interest, Chiliz had been fighting a losing battle. That brings us to the nature of the recent uptick – will it hold up for days to come, or must we prepare for another correction?

Chiliz has been consistently trading way below its 20-day moving average since the second fortnight of November. The good news is, even though the number of red candles is many, their length is small, which means that there is a tug of war between the bears and the bulls, with the bears having the edge. 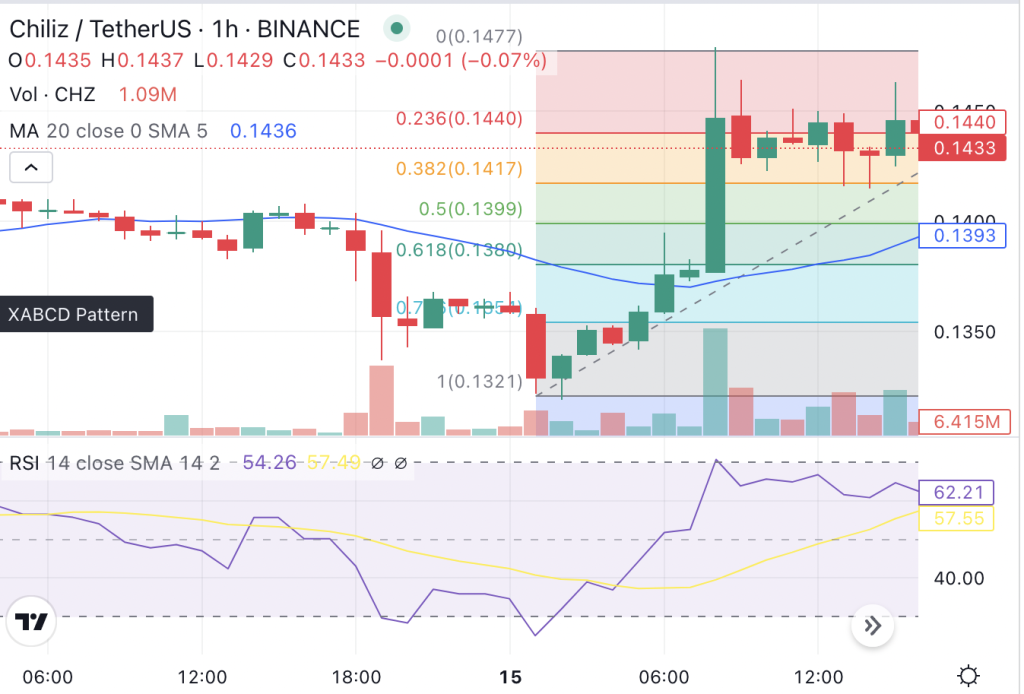 However, the reason for the fall of the Chiliz prize in late November cannot only be attributed to the Qatar controversy. The relative strength peaked at 60 around that time, putting the token dangerously close to the overbought zone – which makes its consecutive tumble predictable.

What are the Reasons Behind the Chiliz Price Sudden Rise?

The current World Cup fever is in full throttle, and Morocco’s recent defeat in the Semi-finals against France has raised more interest in the matches than before. Morocco has also filed a complaint with FIFA over the loss of two penalties that were denied to Morocco due to the referee. While there is not much there to substantiate those claims, it is another piece of news that is driving up the Chiliz price.

Also, with the finals around the corner, Chiliz holders now want to have more say in the final match.

FTX Justice May Have Something to Do with It

After multiple bouts of openly giving interviews all around the news outlets, Sam Bankman Fried’s PR rally to save his sullied image ended with his arrest in the Bahamas. Cryptocurrency’s complex nature caused the government agencies to check every possible venue so that he could be punished, and now he is.

The arrest of Sam Bankman-Fried sends a clear message across the crypto space that while cryptocurrency is a complex matter, it is not beyond the clutches of the law. It can renew people’s trust in the cryptocurrency market and allows more ethical practices to emerge in the space.

Chiliz is a Utility Token

Chiliz is one of that rare crypto assets that doesn’t solely rely on its sellability to be treated as a valuable cryptocurrency. Being a fan token, it allows holders to interact with their favorite sports teams. Since people have been asking for more assets with tangible use cases, Chiliz is one of the few that fits the bill. And as 2022 is close to its end, it is getting clear assets like Chiliz will rule the next year.

Cryptocurrencies That will Rule 2023

If you want to diversify your portfolio and hit the ground running as you step into 2023, here are the cryptocurrencies that you must invest in.

Coming at first is the native crypto of FightOut, a move-to-earn project that removes all the traditional barriers and makes M2E more inclusive and open to all. Not only does it not require an NFT to participate, but it also doesn’t limit itself to counting steps. All the fitness goals are covered in this project. And to top it all off, the project plans to open real-life gyms in several locations to make fitness not only part of physical health but financial as well.

This unique project is taking Move-to-earn into the metaverse, giving FGHT holders a chance to participate in leagues, win rewards, and train with elite combat athletes.

After raising $1 million in the private phase of the presale, FightOut has now opened its early-moving opportunity to all. And this presale comes with an additional perk in the form of up to a 50% bonus for those who choose to lock their tokens. Visit fightout.com now to become part of this revolutionary move-to-earn project.

The fall of FTX dropped the value of the entire crypto space. To prevent such instances to impact a trader’s bottom line, Dash 2 Trade has emerged as a one-of-a-kind crypto intel platform that brings all the tools one would need to make market-beating returns under one roof.

Dash 2 Trade presale is ending within less than 10 hours, which leaves a limited time for those who want to become an early mover. The first CEX launch will go live on January 2023, and the listing pump may drive up the price of D2T to astronomical levels. So far, the token is closer to raising $10 million.

Visit dash2trade.com to participate in the presale and get started.

Calvaria is a unique P2E project that aims to increase the P2E adoption rate by taking a gameplay-centric approach. A game in the same vein as Gods Unchained, Calvaria has emerged as one of the most unique projects to come out this year.

The token has raised upwards of $2.4 million and is currently 79% through the fifth stage of the presale.

Visit calvaria.io to become part of the project.

Robotera is a Sandbox-like metaverse project offering you the ability to own a part of the metaverse that you can explore and create in. With its RobotEra editor, you can create your own NFTs to sell on the marketplace.

It is another one of the biggest surprises of this year and will likely get the attention of many metaverse enthusiasts. Visit robotera.io to participate in the presale that has already raised upwards of $500k. 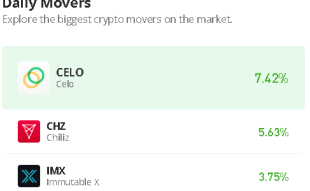