Homenewswhales are predicting this cryptocurrency to explode 100x by 2023 2 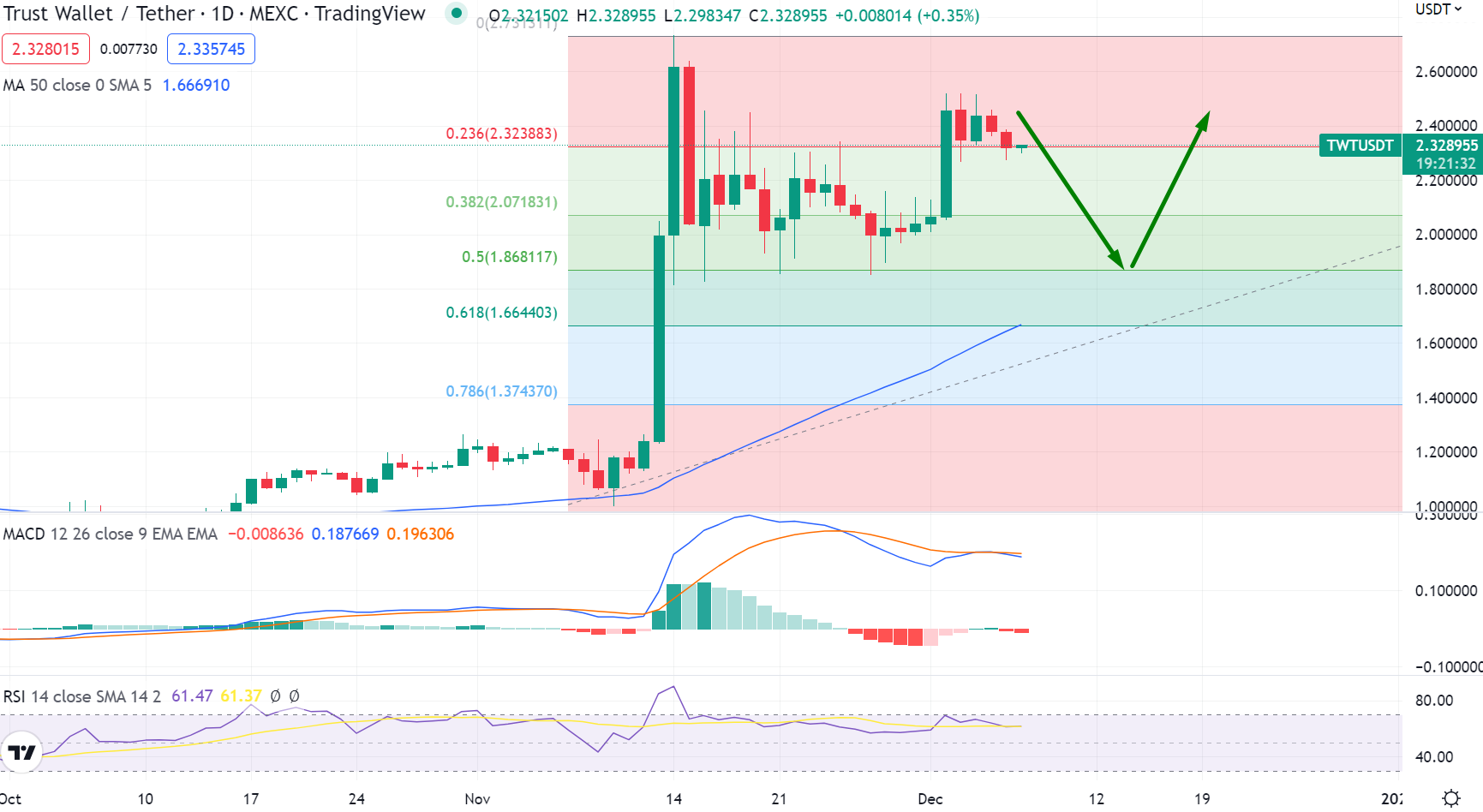 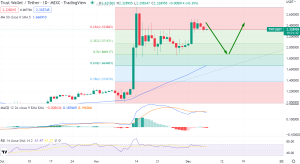 The Trust Wallet Token, or TWT, is a straightforward BEP-20 utility token that offers users of the Trust Wallet many advantages and incentives. Trust Wallet is a mobile cryptocurrency wallet that lets you store dozens of popular native assets and tokens on the Ethereum, Binance, and TRON blockchains.

However, the Trust Wallet has performed exceptionally well recently, rising nearly 77% in the last month. Trust Wallet was considered one of the top cryptocurrencies with significant growth during the previous few days (TWT). The token has outperformed the cryptocurrency market by rising massively.

⚡FTX collapse is Trust Wallet Token's (TWT) gain⚡
Following the collapse of FTX, the price of TWT jumped ⬆⬆ almost 150% in the last six days and hit an intraday high of $2.43 on Nov. 15#Cryptonews #FTX #TWT pic.twitter.com/2fwXiJDnDO

CZ, the CEO of Binance, praised the Trust Wallet app in a tweet and underlined the advantages of storing bitcoin there rather than on a controlled exchange. This enabled Trust Wallet (TWT) to maintain its upward trend and attract further offers.

As we previously mentioned, the investors have been switching away from exchanges and into non-custodial wallets in the wake of the FTX collapse. Changpeng Zhao, the CEO of Binance and a crypto billionaire, tweeted about the value of self-custody and urged people to adopt the Trust wallet, which fueled the token’s uptrend.

On the other hand, the upticks in the Trust Wallet Token were further bolstered by the upbeat crypto market, which had a positive impact on the token and many more.

Trust Wallet Token Surged 135% Within A Week; Will This Bull Run Continue?
Binance CEO Changpeng Zhao highlighting the importance of the trust wallet token amid the FTX-crypto exchange collapse, influenced investors’ concern for the safety of their assets. pic.twitter.com/Xx7ECiE6OO

Although the gains in the cryptocurrency market were short-lived, they began to fall on the day, and the global crypto market value remained at $853.19 billion, representing a 0.73 percent 24-hour loss. Bitcoin (BTC) and Ethereum (ETH), two of the most valuable cryptocurrencies, each surpassed $16,000 and $1,200. Other well-known cryptocurrencies, such as Bitcoin (BTC), Litecoin (LTC), and Ethereum (ETH), also faced losses as overall prices fell somewhat.

However, the reason behind its bearish cryptocurrency market could be the Fed’s hawkish stance, which tends to undermine the crypto market. In the meantime, the recovery in the US dollar played a significant role in capping the gains in the price of the Trust Wallet (TWT) token.

Even if the cryptocurrency industry is slowing down, the currencies listed below are great additions to our portfolio.

Dash 2 Trade’s innovative concept gives it the chance to emerge as the next well-known cryptocurrency in the volatile world of cryptocurrencies. It is a relatively new crypto company that serves a valuable purpose that few others can match. Dash 2 Trading offers various trading services using its own D2T cryptocurrency. 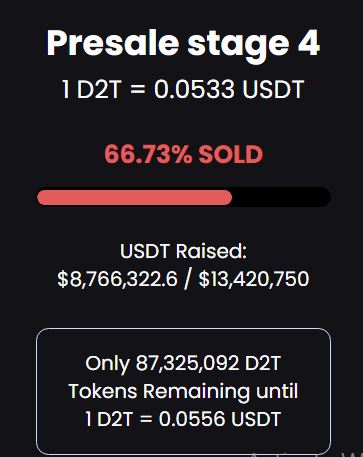 This coin’s presale began in the middle of October, and it generated $500,000 on its first day, raising a total of $1 million. In the pre-sale, which has been ongoing for more than seven weeks, Dash 2 Trade—a platform for crypto analytics and signaling—recently crossed the $7.5 million mark. Investors who are interested in taking part must act soon as the pre-sale is set to enter its last and fourth phases.

Besides this, Dash 2 Trade provides experts with improved technical indicators, such as trade book data and linear regressions, to aid in risk management and decision-making. According to the whitepaper for Dash 2 Trade, the platform will assess new cryptocurrency presale activities according to a number of different factors in order to assure investor trust in possible projects.

More than 70,000 individuals have already invested in these tokens during the ongoing D2T token presale. The third pre-sale for this currency has begun, and 1 D2T token is now being sold for 0.0513 USDT. Pre-sale sales at that time surpassed $7.5 million.

The project, which is now in the presale phase, aims to surpass its competitors and emerge as the most intriguing one in 2023. The concept is based on strong tokenomics, which incorporates a redistribution and burn mechanism to make the token deflationary. As more transactions become feasible via the blockchain, the value of the TORA token will rise as a result. According to the redistribution, token owners who keep them in their possession for a long period are expected to get incentives. 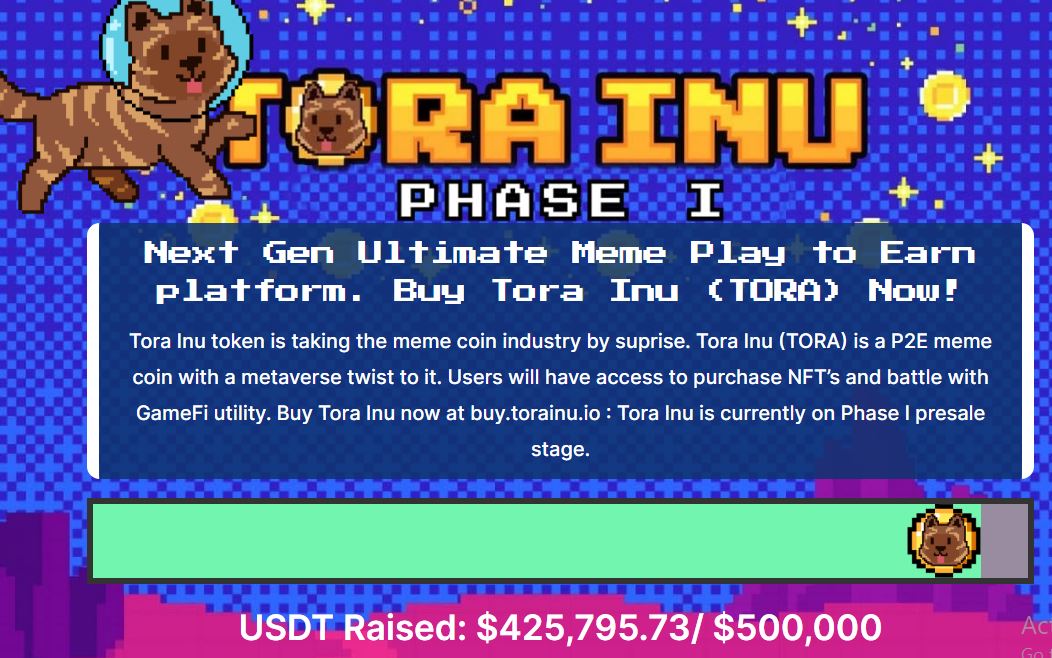 The project will include a P2E game that will give users the opportunity to earn money while interacting with the ecosystem, setting it apart from other initiatives in this field. NFTs will also be incorporated into the game so that players may compete with one another and receive tokens as a prize. The NFTs on the platform may be purchased using the TORA governance token, which enables users to choose how the project will advance in the future.

In addition, Tora Inu’s metaverse, which will enable users to interact with one another in virtual reality, is scheduled to launch later on the roadmap. In order to increase the amount of money flowing through the ecosystem, the Tora Inu team will also host more metaverse zones and advertisements, rewarding holders with buybacks and redistribution fees.

Calvaria is a brand-new cryptocurrency initiative that uses play-to-earn business models. To increase public acceptance of cryptocurrencies, the project aims to develop a spectacular card game of war modeled on video games like Magic the Gathering. By striving to bridge the gap between the real world and cryptocurrencies, the platform hopes to be successful. 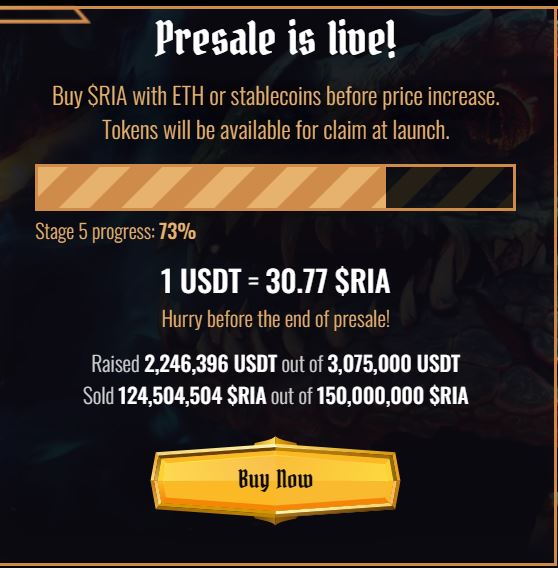 Stage 5 of the RIA presale is currently open to the general public. Calvaria has raised $2,137,934 USDT out of a total of $3,075,000 USDT. The USDT has received positive feedback from those who are interested in cryptocurrencies and play for profit.

According to these numbers, 121 million RIA tokens were sold. The Stage 5 presale for this peer-to-peer cryptocurrency startup has already sold over 70% of its tokens. The exchange rate for 1 USDT at the time of writing was 33.33 RIA.

Tamadoge is the name of the upcoming, reasonably-priced cryptocurrency for 2023. It is a recognized form of payment on the Tamaberse platform, which lets users create and raise virtual animals. Following that, you may participate in user fights to climb the TAMA leaderboards and collect rewards each month.

TAMA is becoming increasingly popular among cryptocurrency enthusiasts thanks to its extensive trading on several platforms, high dependability, and enormous potential. One of a cryptocurrency’s most significant characteristics is its potential deflationary element, which suggests that it may ultimately reduce the quantity now available. 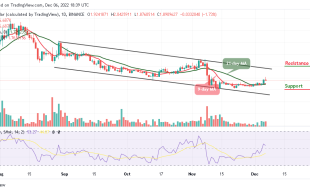