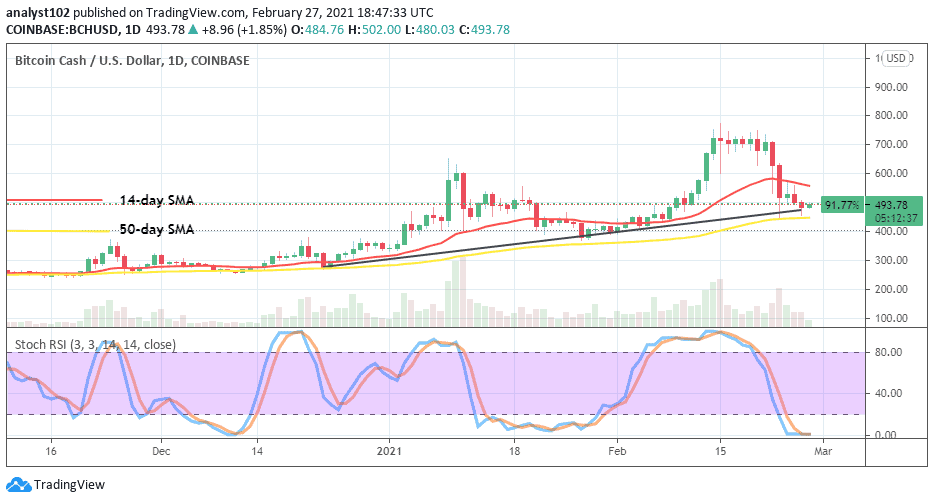 BCH Price Prediction – February 27
Bitcoin Cash has been overwhelmed to an extent by the US dollar after a sharp drop on February 22. And, that has eventually led the crypto’s value to trade around a low value of $500 from a high of $700.

BCH/USD – Daily Chart
Featuring variant short trading candlesticks is taking place within space of the two SMA trend-lines presently. The 14-day SMA is over the 50-day SMA. The smaller SMA is above the bigger SMA trading indicator pointing slightly to the east direction. The last bullish trend-line is now closely found around the 50-day SMA to add to the firmness of the tough point that awaits a further downward drop. The Stochastic Oscillators have moved into the oversold region to possibly indicate a reduction in seeing more downward moves of the BCH/USD market.

Has the BCH/USD price reached a point around the $500 mark for a rebound?
It is most likely that at the current $500 trading point, bulls stand a better chance to make a visible stride in the next session. In that wise, price could hold strong for long creating a line of small-lower lows around $500 and $400 levels for a while before the bulls could make a clear direction in their favor. However, the presumed move has to backup by active price action to ensure a complete affirmation.

The BCH/USD bears seem getting reduced in momentum as being indicated on the trading chart. The downward move may in the long run extend to test the $400 low point in completion of bears’ strength. Meanwhile, a violent breakdown of the point may cause bears’ trap. Therefore, traders should be wary of considering going short further. 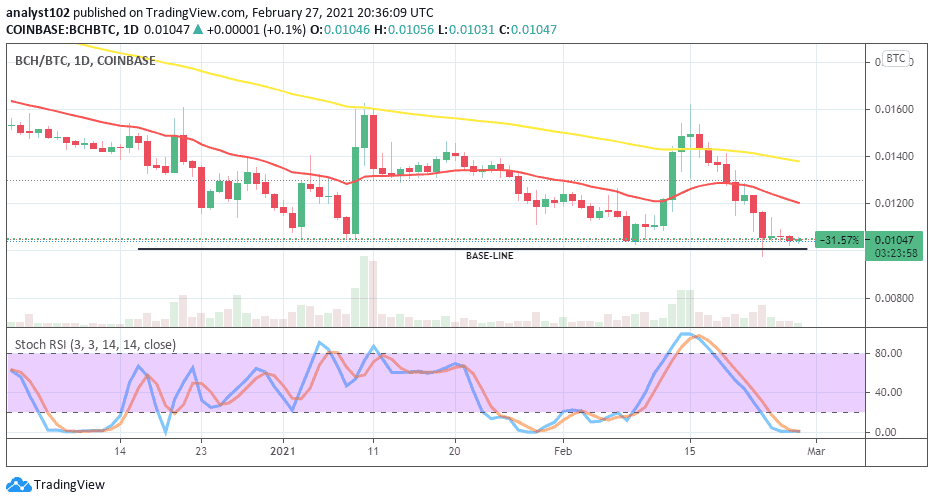 BCH/BTC Price Analysis
Comparing BCH to BTC price moves, there has continued to be pressure on the base-crypto as paired with the counter-crypto. However, the falling pressures are almost exhausted as price now closely approaches the base-line. In what looks like the usual trading phenomenon, the base-crypto has a higher probability to regain its lost stance against the counter-crypto any time from now. As a result of that assumption, a recovery move is in the loom.