Since the value of cryptocurrencies has been steadily falling during the year 2022, this is a natural question on the minds of most investors.

The minor price increases in cryptocurrencies did little to increase investors’ profits and revenues, and the market’s continued depressing effects from the bankruptcy proceedings of numerous blockchain and crypto organizations, numerous scandals, and unforeseen price fluctuations have left huge cracks in investors’ balance sheets, so many have decided to flee the market or are considering doing so.

The rising prices of risky assets, such as cryptocurrency, are driven mostly by investors’ bullish attitudes. While new cryptocurrencies continue to be developed, investor interest is waning due to the present market climate of uncertainty.

As a result of this chain reaction, trade volumes and the value of the cryptocurrency market as a whole fell. Now, many are wondering what the market will be like in 2023, and why crypto is dropping despite showing signals of increase over the previous several weeks.

The abrupt collapse of FTX, a significant cryptocurrency exchange, has not only jolted the business to its core but also prompted several inquiries about the efficiency, openness, and regulation of the global cryptocurrency market.

There is no denying that cryptocurrencies are going to stay. Non-fungible tokens (NFT), play-to-earn (P2E), decentralized finance (DeFi), and smart contract applications have fueled the meteoric ascent of certain cryptocurrencies that have lasting value and merit serious consideration as an investment in 2023. As a matter of fact, market dips might serve as a shrewd chance to acquire cryptocurrencies at a massive discount.

So that you may properly evaluate a cryptocurrency and its utility before immediately investing in it in 2023, we have outlined the reasons behind the current market crash as well as the currencies you need to invest to help you sail smoothly for 2023.

What Major Events Led to the Downfall of the Crypto Market?

For now, the FTX hit represents one of the market’s worst setbacks. Several additional exchanges and crypto lending businesses connected to the FTX platform proceeded to declare bankruptcy after the collapse of the largest crypto exchange in the world.

In addition, the value of key cryptocurrencies like Bitcoin and Ethereum plummeted. Additionally, investor anxiety was heightened by reports of an FTX Exploiter who was exchanging huge sums of Ethereum for Bitcoin.

Large-scale market panic has already been generated by the collapse of the Terra environment. After a long nap since the fourth quarter of 2021, Bitcoin and Ethereum were awakened by Terra’s demise. In addition, the values of cryptocurrencies were consistently impacted by the rising rules in the decentralized market.

It goes without saying that regulators and cryptocurrencies have a tense history of disagreement owing to persistent myths and a lack of trust in government bodies. Investors have been placing greater value on assets that will bring creativity and profitability as a result of the lack of clarity in rules that have been stifling development and innovation in the business.

How Did This Affect The Crypto Market?

Both advantages and disadvantages come with Bitcoin and Ethereum’s position as the market’s two largest cryptocurrencies. When market fluctuations occur, Bitcoin and Ethereum act as shock absorbers. While traders and investors pondered the question, over why the crypto market is crashing, Bitcoin’s price action provided the answer.

Both Bitcoin and Ethereum are repeatedly rejecting their primary resistances, and there are a number of potential causes. It is of utmost importance to prevent additional financial losses from the prediction and rigging of various crypto assets.

When the whales dump their investments and cause the market to drop, the situation worsens. You should do careful market research and seek expert advice from finance professionals if you are considering purchasing Bitcoin assets at present.

Trading or investing in virtual currency carries a high degree of danger. In addition, whatever the case may be with FTX, it is not incorrect to assume that crypto winter will last for longer than anticipated. More openness and stricter rules may soon be on the horizon in response to the recent disasters in the cryptocurrency industry.

It is hoped that the commotion caused by FTX will assist in purging the system of fraudulent tokens, making room for cryptocurrencies with considerably more value and utility.

If you want to find a project with a good return on investment, you should go where the money is. If you look into projects with solid fundamentals that have attracted the attention of several investors well before they begin trading on exchanges, you can typically find tokens for a significantly discounted price.

In the recent past, four presales have attracted the attention of both large institutional investors and smaller retail investors because of their impressive developers and designers, innovative platforms, big ambitions, and active investor communities. Here is the list of tokens you should invest in:

FightOut is a groundbreaking Move-to-Earn software and gym franchise that permits players to earn tokens via physical exercise. Over $2 million in money has been raised by crypto whales to the campaign.

FightOut differentiates itself from prior M2E ventures in a number of ways. The technology underlying FightOut allows users to measure more than just their step count while exercising. FightOut does not require users to pay NPCs to play, and the game itself compensates players for making good choices as opposed to, for example, aimlessly roaming.

Within the FightOut application, a user’s avatar can represent them. This avatar offers entry to a Metaverse community where fitness is a kind of currency owing to the focus placed on muscular and cardiovascular health. As the player advances through the game’s stages, their avatar gets experience and levels.

Late in the year 2023, the very first FightOut gym will finally open its doors. Each location will have a juice bar, a studio, and shared office space. The FightOut ambassador program intends to recruit prominent people from the world of professional boxing with the aid of masterclasses and other events.

All the information you need to make educated investing decisions can be found in one convenient place at Dash 2 Trade. To achieve this goal, they will supply instruments for analyzing social sentiment, buy and sell signals for popular coins, and a scoring system with sophisticated grading features for pre-sales.

After the recent FTX crisis, many people have begun to take precautions to ensure they are not victims of similar cryptocurrency fraud. As a result, Dash 2 Trade has stated that it will launch its platform and complete its token presale earlier than expected.

Dash 2 Trade (D2T) tokens are necessary for the greater part of the platform’s functionalities; hence, a large demand is predicted. The ongoing D2T token presale has generated over $10.1 million after selling more than 75% of available tokens. In addition, the presale dashboard beta is forthcoming.

Players in RobotEra have complete command of their robotic companions as they explore and rebuild the devastated planet of Taro. The game’s features allow players to build their own robots and objects without the need for coding knowledge.

Participating in missions, community activities, and staking may all earn players money. They may also host their own events, charge other players a fee to attend, and sell advertising space on billboards and structures inside the game world.

The team behind the game has big ambitions for next year, with the addition of VR/AR features that will make for even more immersive gaming. More than $575k has been pledged to RobotEra’s presale, and the company is making rapid progress toward its $1m goal.

The strategy card game Calvaria: Duels of Eternity makes use of NFT trade cards. Players build decks of characters to utilize in strategic matches set in a Metaverse version of an afterlife setting. RIA tokens may be used in the Calvaria marketplace to purchase in-game crypto and non-fungible tokens (NFTs) such as game assets and cards.

RIA also functions to delegate authority over the game’s decentralized autonomous organization (DAO), which will control the game’s development and other choices. As an ERC-20 token, the token may also be staked to provide holders with a secondary source of revenue.

Presale has raised $2.514 million, putting Calvaria within striking distance of its $3 million stretch goal. Since the project is progressing ahead of schedule, the developers have decided to finish the presale early, reducing the total number of tradable tokens from 300 million to 150 million (a decrease of 13% from the original offering). 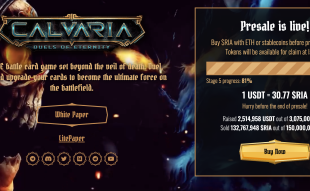 Join Our Telegram channel to stay up to date on breaking news coverage Calvaria ...