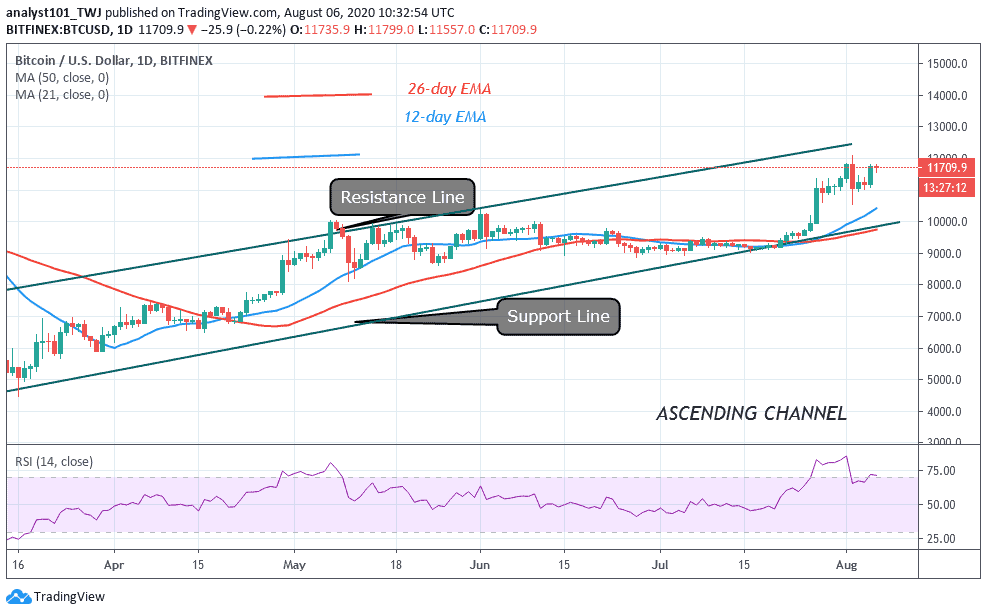 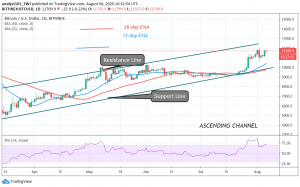 Bitcoin (BTC) Price Prediction – August 6, 2020
After four days of consolidation between $11,000 and $11,400, buyers pushed above $11,400 resistance. The stage is now set for Bitcoin bulls to retest the $12,000 mark. According to an analyst, a further uptrend will unfold once the overhead resistance is breached.

On August 5, BTC/USD rebounded as price broke the $11,400 resistance. Incidentally, the king coin reached a high of $11,800. Unfortunately, that positive move was repelled to $11,600 low as price resumed another upward move. The bottom line is that Bitcoin bulls must break the $12,000 overhead resistance. Buyers are making the second attempt after the initial failure at the minor resistance. On the upside, a strong bounce above  $11,600 support will propel price to break the $11,800 and the momentum will extend to retest the overhead resistance.

The expectation is that once the $12,000 resistance is breached, Bitcoin is likely to explode on the upside. The next target for BTC will be the $13000 high. Unfortunately, if buyers fail to break the overhead resistance, BTC will encounter another breakdown. The king coin may drop to $10,500 and resume another consolidation. Meanwhile, BTC is at level 72 of the RSI period 14. The coin is in the bullish trend zone

Millennial Investors Are Attracted by Bitcoin as Against Gold- JP Morgan
According to the JP Morgan report, Millennial Investors are disposed to having Bitcoin in terms of its recent surge. He added that while the younger investors are inclined to Bitcoin, the older investors are disposed to Gold. The bottom line is the similarity both have in common. Presently, Bitcoin and Gold are rising in terms of price. Bitcoin and Gold have something in common. They are limited in supply, store of value, and are deflationary. Bitcoin has breached the $10,000 mark and attempting the $12,000 overhead resistance. Gold has also broken the $2000 high and has soared to $2,040 per ounce.

BTC/USD Next Possible Direction
The king coin is approaching the $12,000 resistance but may face another rejection. The price will fall to the $11,000 support. A red candle body tested 0.786 Fibonacci retracement level. This indicates that BTC will retest the Fibonacci 1.272 extension level but will reverse to 0.786 retracement level where it came from. In other words, the price will rise and retest the $12,000 and then fall back to $11,000 support. 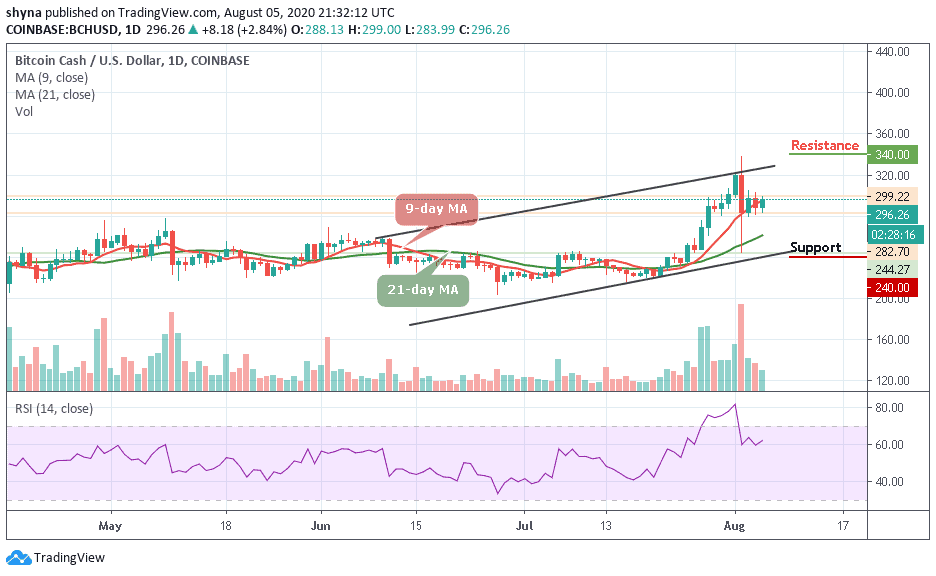