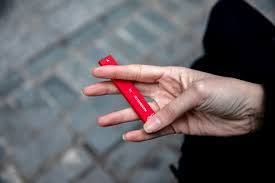 Puff Bar, a controversial nicotine company, has announced its foray into the blockchain sector as it looks to improve product originality. Recently, the company announced via its Reddit page that it would partner with blockchain company VeChain Technologies to use the latter’s blockchain in fighting counterfeiting.

Puff Bar is a product made by CooL Clouds Distribution, a Los Angeles based manufacturer of flavored cigarettes. The company sold several flavors of e-cigarettes, including pink lemonade, strawberry, and mango.

The brand was discontinued in the United States last June after the Food and Drug Administration (FDA) sent a notice asking it to clear its products off shelves. The FDA’s action was a part of the government’s mission to curb the spread of flavored cigarettes in the country. The health regulator had sent letters to nine other companies either selling e-cigarettes or nicotine solutions that could easily find their way into the hands of kids.

In its recent post, Puff Bar explained that it had stopped selling e-cigarettes before the FDA ban. The company added that its products aren’t safe for kids, and it makes a conscious effort to sell only to adults who understand the risks of smoking.

As for its partnership with VeChain Technologies, the company explained that an absence of its products had led to the proliferation of counterfeits. While the company’s Reddit account has been working to dissuade people from purchasing these counterfeits, it hasn’t been so effective. So, it is turning to blockchain.

Puff Bar explained that the VeChain collaboration would essentially help it – as well as customers – to ascertain product originality if and when its products get back into stores. The partners will use authentication technology tags manufactured by Cypheme, a French anti-counterfeiting technology.

“When you go to our site to verify, you click a button and it will automatically open the camera on your phone. You take a picture & submit, press enter, within 5 seconds the technology is able to pick up the micro imperfections on the sticker that can’t be seen by the naked eye to verify whether this product is authentic or not,” the release explained.

It is unclear how Puff bar hopes to get back on shelves. The Trump administration had a zero-tolerance stance against flavored vapes, although the company might be hoping to curry favor from the Biden camp.