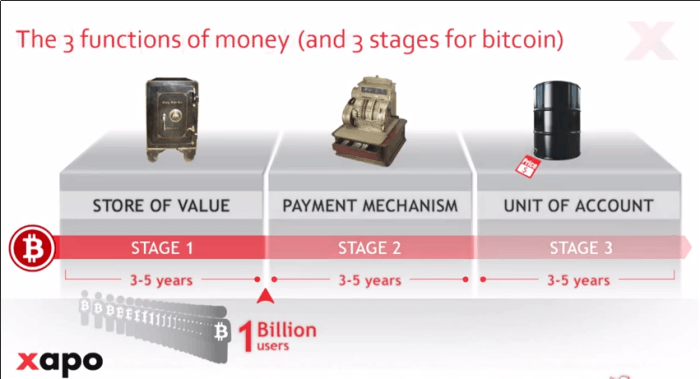 Xapo‘s Wences Casares recently gave a presentation on bitcoin at the Chicago Gold Ideas conference, and he was able to bring up an interesting perspective on the future mass adoption prospects of bitcoin near the end of his talk. Casares broke down three steps that could potentially lead to bitcoin becoming money over the next 10 to 15 years. The three steps described by Casares were also the three main characteristics of a good money: store of value, payment mechanism (medium of exchange), and unit of account. It is generally accepted that an asset must have these three properties to be considered money, and Casares explained how each of the three attributes could eventually be attained by bitcoin over time.

One of bitcoin’s first use cases has been as a store of value. This is the “gold 2.0” argument that the Winklevoss Twins and others often make when interviewed by the mainstream press. Of course, bitcoin must have some form of utility for it to have any value at all, and this has been one of the more contentious areas of debate between old school gold bugs and bitcoin believers.

An argument could be made that there are some “intrinsic” use cases for bitcoin, such as censorship-resistant online payments or proof-of-existence, which give the digital commodity value outside of its use as money. These commodity-like properties of bitcoin are what attract people to it in the first place, and many of those individuals decide to purchase a few coins as savings and throw them in a hardware wallet for safe keeping. There are plenty of people already using bitcoin as a store of value, but it’s likely that many more individuals would need to purchase some bitcoins of their own to get to the next step in Casares’s guide.

Bitcoin not real money yet. But maybe way off in future. @batchelorshow @paulvigna @Mikejcasey01 @larry_kudlow

People mostly think about bitcoin as a payment system, but that payment network does not have very much value if there aren’t many people holding the currency required to use that network. Once a large enough number of people are holding bitcoin, then it only makes sense to use it as a medium of exchange. Although we’ve seen some big names, such as Microsoft and PayPal, get into bitcoin, the reality is that there hasn’t been that much activity in your everyday retail payments via bitcoin because not enough people are holding it as a store of value. In his presentation, Casares mentions one billion as the number of people who need to be holding bitcoin for it to become a widely-used payment system.

Once bitcoin is in the hands of billions of people and a vast majority of merchants are accepting it as payment, then it could eventually make sense to price goods and services in bitcoin instead of a fiat currency. The bitcoin exchange rate is simply too volatile for the digital asset to be used as a unit of account right now, but price stability has been improving over time. Bitcoin’s usage as a unit of account would be its final step before it could be considered money.

[Read More: The Bitcoin Price Has Been Remarkably Stable Lately]

You can watch Wences Casares’s full explanation of bitcoin below (the part about bitcoin becoming money begins around 11:40):