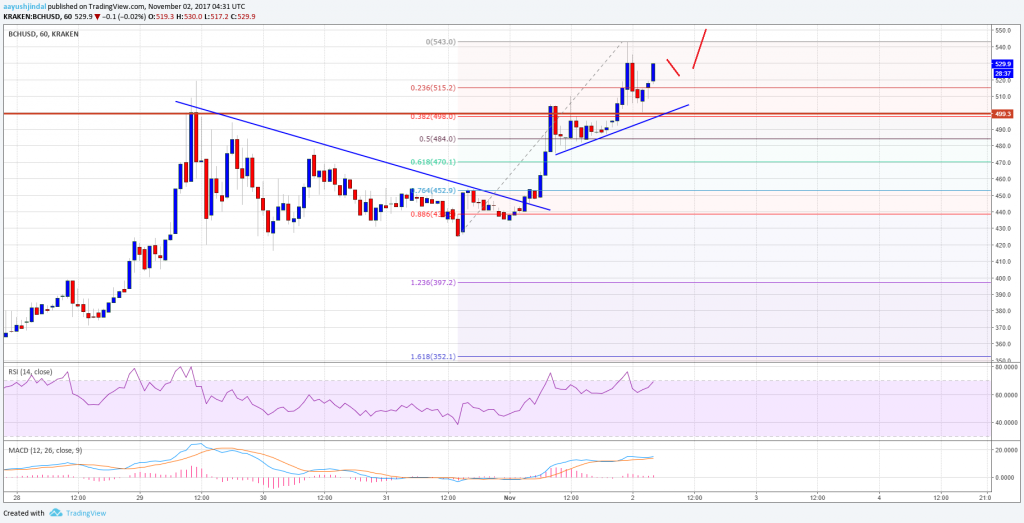 Key Points Bitcoin cash price remains in an uptrend and recently traded above the $500 level against the US Dollar. There is a short-term bullish trend line forming with support at $510 on the hourly chart of BCH/USD (data feed from Kraken). The price broke a major bearish trend line at $460 to initiate the current uptrend, which is a positive sign.

Bitcoin cash price is surging higher and placed well above $500 against the US Dollar. BCH/USD might continue to move higher towards $580-600.

There was a solid start to a new uptrend in Bitcoin cash above $440 this week against the US Dollar. There were decent gains in BCH and the price was even able to move above the $450 resistance. To initiate the upside, there was a break above a major bearish trend line at $460. It opened the doors for more gains and the price was able to move above the $500 handle. It traded to a new monthly high at $543 from where a correction was initiated.

As long as the price is above the $500 handle, there are chances of more gains above $550.

Hourly MACD – The MACD for BCH/USD is gaining momentum in the bullish zone.

Hourly RSI (Relative Strength Index) – The RSI for BCH/USD is currently near the overbought levels.