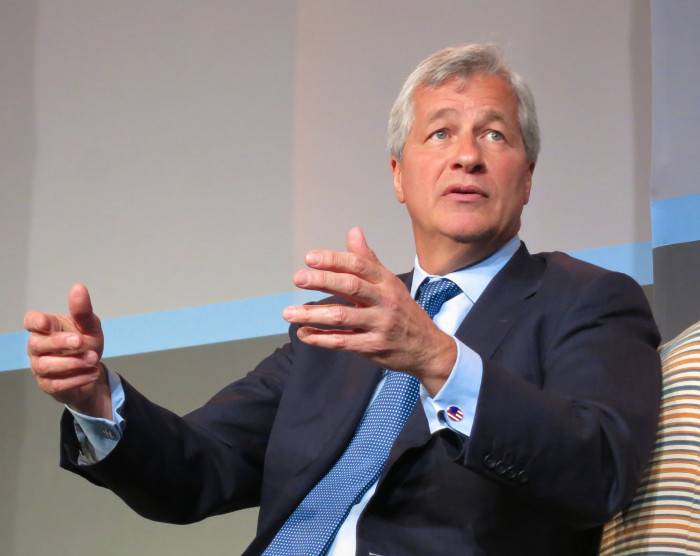 NEW YORK (InsideBitcoins) — Although JPMorgan Chase CEO Jamie Dimon has let it be known that he is not a fan of bitcoin as a currency, the TwoBitIdiot recently pointed out that at least three past executives from the bank have joined bitcoin companies over the past two years. Goldman Sachs is also represented in the bitcoin industry via former Executive Director Timo Schlaefer and trader Fred Ehrsam. Schlaefer is launching a bitcoin derivatives brokerage, while Ehrsam was one of the co-founders at Coinbase. Perhaps the biggest sign that Wall Street is ready to embrace bitcoin came through the New York Stock Exchange’s recent investment in Ehrsam’s Coinbase. It seems that more traditional financial institutions and Wall Street veterans are involving themselves with bitcoin every few months.

What does Jamie Dimon think of bitcoin?

JPMorgan Chase’s Jamie Dimon has actually commented on bitcoin more than once, but he’s never had many positive things to say about the long-term prospects of the financial innovation created by Satoshi Nakamoto. During the Institute of International Finance annual membership meeting in late 2014, Dimon had this to say about bitcoin’s chances of success:

“The issue I have with Bitcoin is that it’s not about the technology, it’s about governments. When people form nations, one of the first things they do is form a currency. Are regulators and governments really going to foster Bitcoin over a long period of time? I think the answer is no.”

This was actually a much more tame perspective on bitcoin when compared to what Dimon had told CNBC’s Andrew Ross earlier in the year. He claimed, “It’s a terrible store of value. It could be replicated over and over again.” Dimon had also shared the same regulatory concerns that he talked about at the Institute of International Finance later that year. He went as far as to say the reality of adjusting to traditional banking regulations would “probably be the end of [bitcoin.]”

While the original comments from Dimon came on the sidelines of the 2014 World Economic Forum at Davos, the discussions related to bitcoin at the 2015 edition of the annual meeting were much more accepting of the digital currency. Whether you’re at Davos or on Wall Street it seems that opinions are beginning to shift when it comes to bitcoin — no matter what Jamie Dimon has to say.

Earlier this week, it was announced that former head of JPMorgan’s giant commodities unit Blythe Mathers would be joining Digital Asset Holdings — a stealthy (the bitcoin buzzword of the week) bitcoin startup based in Chicago. Not much is known about this particular startup right now, but Masters has claimed that the blockchain will be used to make the current financial system “stronger, better, and safer.” Masters had quite a storied 30-year career at JPMorgan where she helped engineer credit default swaps — also known as the financial derivatives that were an integral part of the 2007-2008 financial crisis.

Is 2015 the year bitcoin goes to Wall Street?

In addition to Masters, Circle CFO Paul Camp and an unnamed entrepreneur who is working on a — you guessed it — stealth project mentioned by TwoBitIdiot in the latest release of his Daily Bit have also had stints as JPMorgan executives in the past. This follows the recent news of the Bitcoin Investment Trust becoming the first publicly traded bitcoin fund on an OTC market and the launch of US-based Coinbase Exchange with FDIC-insured US dollar deposits. The Winklevoss Twins would also like to launch their own exchange and a bitcoin ETF on the NASDAQ as soon as possible. It’s hard not to view this as the year Wall Street embraced bitcoin when you combine all of these stories together.