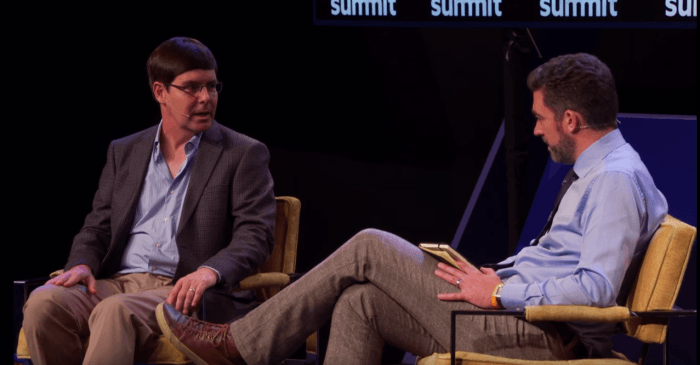 Bitcoin Foundation Chief Scientist Gavin Andresen was interviewed by The Profit Margin’s Jim Fitzpatrick at the recent Web Summit in Dublin, Ireland, and the Bitcoin XT developer was able to keep his cool when asked about the contentious block size limit issue. Although there have been a number of different proposals made for increasing the block size limit, consensus around one plan has not been found.

Although there is not a clear path towards a block size increase at this time, Andresen claimed the issue will get solved. The longtime Bitcoin developer also shared some thoughts on the peer-to-peer digital payment system’s bright future and how the technology’s core values can be preserved as it goes mainstream.

On the Block Size Issue

When asked about Bitcoin’s block size issue in the interview, Gavin Andresen was quick to dismiss the notion that some sort of solution will not be found. He noted:

“I am confident that it’s going to get solved just because everybody agrees it’s a problem that needs to get solved. We’re just quibbling over exactly how.”

The interview took place a few days before the Scaling Bitcoin Workshop in Hong Kong. Multiple proposals for increasing the block size limit were made at the event, but whether any of the plans will be implemented into Bitcoin Core is still an unknown at this point.

The Future of the Blockchain is Bright

In addition to discussing the future of the block size limit, Andresen also discussed the recent interest in blockchain technology from financial institutions. He explained that Bitcoin’s ability to cut out middlemen and lower costs is what is driving all of the new startups built around the technology:

“This idea of a global public ledger — or even not a global public ledger but public ledgers — I think is really taking off in the finance world. A lot of people see a lot of opportunity to get rid of some middlemen and make money, and obviously, if you see a way of cutting out a middleman and making more profit, that’s a strong incentive for you to check out this new technology.”

Although there is plenty of money being poured into blockchain-related projects at various banks and financial services companies, there is some disagreement over whether the Bitcoin blockchain is the one that should be used by these institutions. Many bank executives are interested in permissioned blockchains that do not come with the same sort of openness found in Bitcoin.

One final note Gavin Andresen made on Bitcoin’s future during his appearance at Web Summit is that some people are worried Bitcoin won’t be able to maintain its decentralized nature as it continues to become more mainstream. He explained:

“I think there’s a little worry that if it grows too fast, then some ideals will be lost along the way — the ideals of being decentralized, having nobody in control, [and] permissionless innovation. I’m not worried about that. The technology is open. I can’t see it becoming closed anytime soon.”

Andresen backed up his belief that Bitcoin will remain open and permissionless by pointing out there isn’t really anything he could do to hurt the system as one of the five Bitcoin Core developers with commit access to the GitHub repository. He stated:

“[Bitcoin is] very immune to, kind of, outside influence. If I was evil, and I wanted to do something to compromise those ideals, I’m not sure what I could do frankly. I don’t have that much power. So I’m confident that, as Bitcoin grows, it will remain a system open to anyone to innovate [and] a system open for anyone to participate in, and I think those are the principles that really are important to keep in mind.”

Although everyone will likely be able to participate in Bitcoin as it continues to grow and evolve, the way in which that participation takes place is a highly-debated topic in the Bitcoin community. Some say that more transactions should be moved off of the blockchain and Bitcoin should be more of a settlement layer, while others believe that as many transactions as possible should be made on-blockchain. Bitcoin’s future seems bright, but the exact path towards complete ubiquity throughout the entire world still seems a bit unclear.