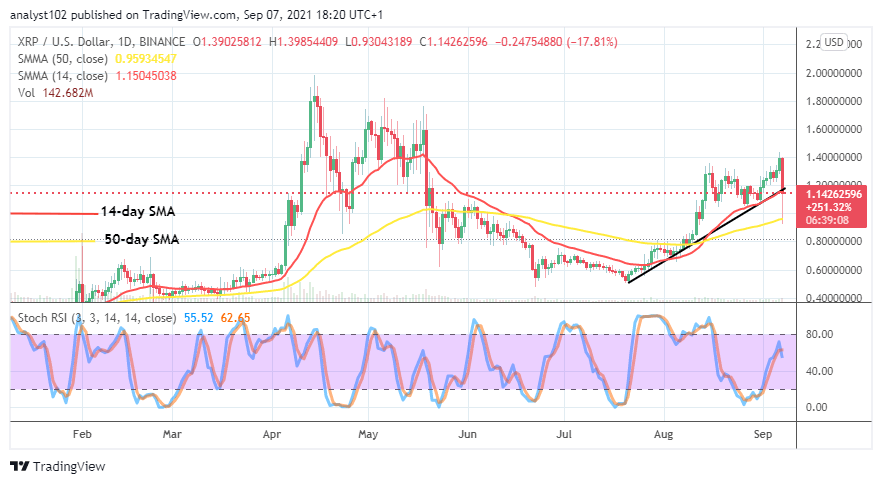 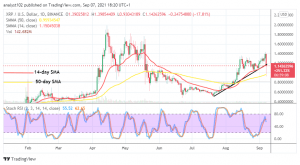 XRP Market Witnesses an Erratic Decline– September 7
The XRP/USD market witnesses an erratic decline in its valuation as the downward forces have created a kind of panic sell-off trading situation in the last couple of hours back. It is worthy of noting that the crypto’s price declined past $1 briefly before springing upward to trade around 1.14 at a negative percentage rate of 17.81. That’s quite a volatile motion in the bearish price direction.

XRP/USD – Daily Chart
There has been a shake-up in the Ripple XRP/USD’s price valuation as the crypto market witnesses an erratic decline coupled with active rallying motions at variant-lower support levels. It depicted on the daily chart that a bearish long-legged candlestick suddenly appears from a high trading line at 1.40, breaching all the indicators to the south side. The 14-day SMA trend line is over the 50-day SMA trend line as the bullish trend line drew alongside the smaller SMA indicator in a supportive posture. The Stochastic Oscillators have crossed the lines southbound beneath the range of 80.

Could it be that the market will still go down sustainably as the Ripple XRP/USD market witnesses an erratic decline?

Today’s sudden decline occurs with a surprisingly heavyweight, causing the Ripple XRP/USD market to witness an erratic decline that sees through differential lower support trading lines. While the volatility is on course, some quick profits are in favor of ups and downs concerning the strategic plans that traders put in place. In light of that, bulls are to be on the lookout for rebounding motions while a pull-down occurs before re-launching long positions.

On the downside, the end completion of today’s bearish candlestick will leave a psychological trading clue of the subsequent direction of this crypto economy. If it finishes by engulfing some of the candlesticks that represent some ups from August 14th to September 6th sessions, it means some downs may still come to play out in the following days’ operations. However, traders should be wary of the late entry of shorting positions. Investors may as well consider joining while the price goes dip southward further. 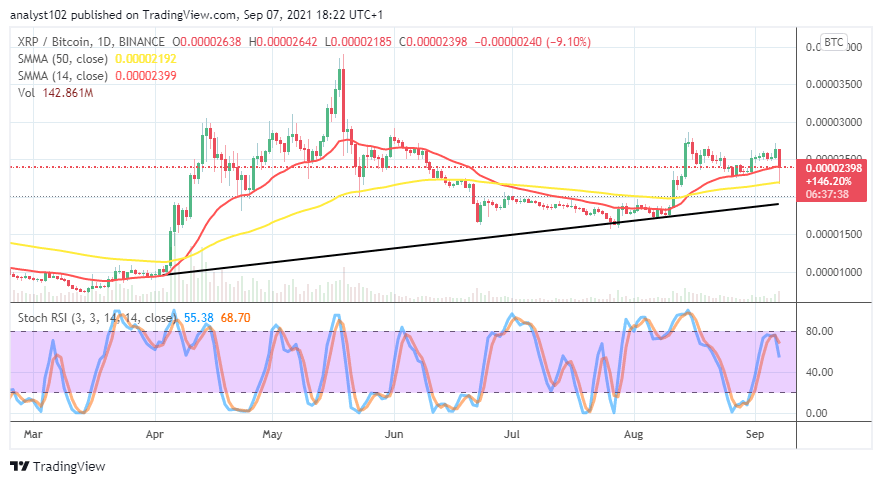 The Ripple XRP/BTC price analysis chart reveals that the cryptos market witnesses an erratic decline in a less active format. It shows that the base crypto loses momentum to push northward further against the counter cryptocurrency. The 14-day SMA indicator is above the 50-day SMA indicator as a bearish candlestick has dared to breach them to the south side. The bullish trend-line drew beneath the SMAs to showcase that the Ripple XRP still possesses higher potency of trending capability despite today’s sharp drop. The Stochastic Oscillators have crossed the lines southbound below the range of 80. That portends that base crypto is on the verge of losing stance as paired with the flagship crypto. 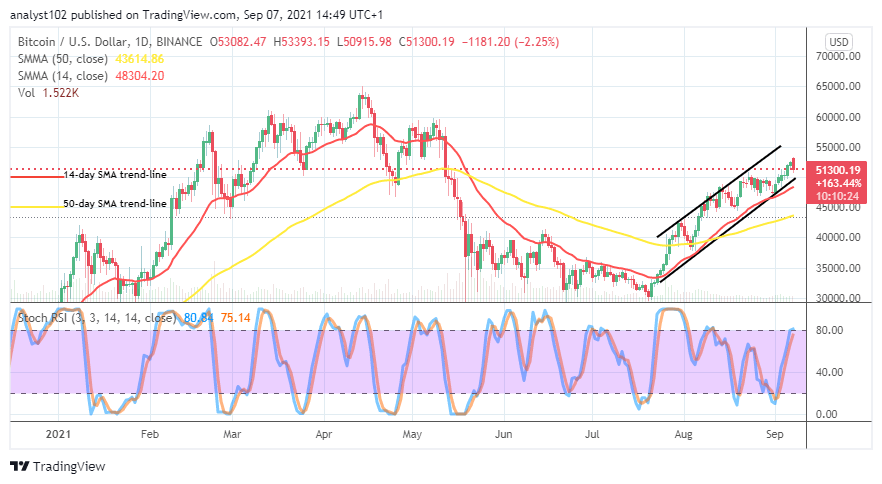