The Graph has been on a major rise over the past 24 hours after making double-digit gains. These gains have corresponded with what has been happening in the broader market, given that Bitcoin has already reached $62K. GRT is also among the leading gainers over the past day.

Over the past day, GRT has made major gains that have contributed towards new highs for the coin. If the gains continue, we could the altcoin testing the upper resistance of $0.90 and thereby $1. This is a crucial resistance for the altcoin because it could trigger another bullish rally from buyers.

The price action has a high chance of maintaining the upswing because of support from the broader market, hence we could even see the targets of $1.25 and $1.50 being reached. Despite these gains, GRT is still far from reclaiming the highs of above $2, which could only be created if the entire market rallies.

GRT’s gains over the past 24 hours could also fail to hold, which could lead to a dip in prices. In this case, the altcoin will test the lower support of $0.75, which could trigger dip buying from the investor who expects that the bullish rally will continue in the coming weeks.

Where to Buy GRT

If you want to buy GRT during the current bull market, you can open an account on the following exchange platforms:

eToro is one of the reliable and trustworthy exchanges. It supports a wide range of cryptocurrencies and charges low trading fees. These features make it a favorable platform for both new and expert traders.

You can buy GRT coins from Binance. Binance is the largest exchange platform in terms of trading volumes. It offers high liquidity, which enabled faster trades. Moreover, it charges some of the lowest trading fees, which allows traders to keep most of their profits. 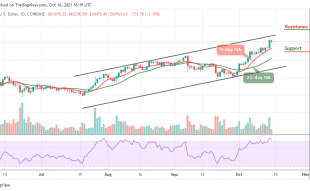