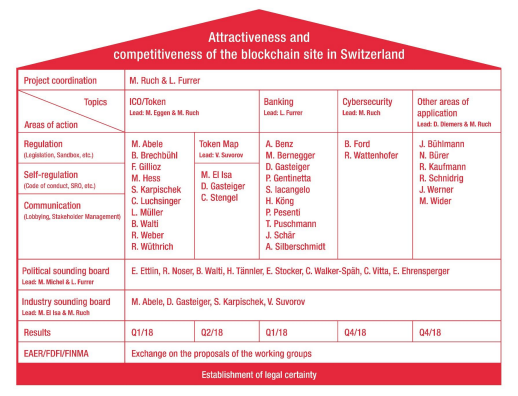 In recent years Switzerland has become one of the world’s leading locations for blockchain companies and business models. These companies need legal certainty. The publication of the report by the Federal Council marks an important step in this direction and provides a detailed survey of the legal challenges that these new business models create. The report does not call for a separate blockchain law, preferring to amend existing civil and financial market law. This reflects the objective of setting the framework conditions so that Switzerland can strengthen and extend its leading position in blockchain.

The fact that Switzerland is taking a pragmatic approach is to be welcomed.

For Heinz Tännler, President of the Swiss Blockchain Federation, things are clear:

“Legal implementation now needs to follow on quickly from this report. Switzerland needs this certainty as the basis for further development.”

The 10-point program launched recently by the Swiss Blockchain Federation to strengthen blockchain technology in Switzerland also calls for a binding agenda from the regulator. This position paper spells out the social policy, regulatory and public interest issues that need to be settled if Switzerland is to be a successful blockchain location.

Several points in the federal report have been taken up from the white paper of the Blockchain Taskforce, out of which the Swiss Blockchain Federation emerged at the end of October 2018, such as a proposed change in civil law for transferring tokens. The Federal Council’s report also concurs with the analysis that it does not seem necessary to change anti-money laundering legislation at present, as the existing rules can also be applied to new business models.