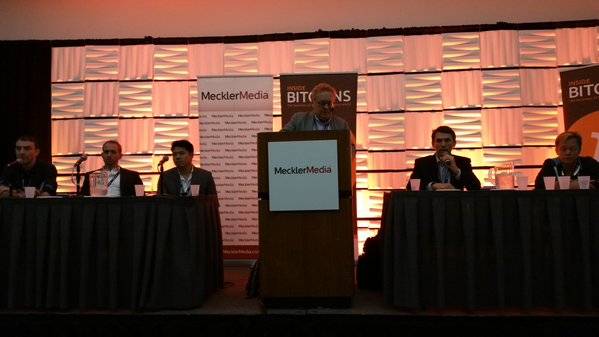 One of the main trends in the Bitcoin space over the course of 2015 has been the industry’s move away from token-powered blockchains, such as the one created by Satoshi Nakamoto, towards more general blockchain technology. While there are definitely a large number of banks who have shown interest in permissioned blockchains more than Bitcoin, there are also a number of Bitcoin-centric startups who are simply rebranding themselves away from Bitcoin’s somewhat-tarnished brand.

The topic of Bitcoin vs blockchain came up during the Pros and Cons of Bitcoin Investing panel on day two of Blockchain Agenda San Diego, which should come as no surprise. As panel moderator Michael Terpin explained, “The title of basically every panel over the last year was ‘Bitcoin vs Blockchain.’”

Both Terpin, who is the chairman of the board at BitAngels, and Blockchain Capital Managing Partner Brock Pierce made the point that, for some companies, the move from Bitcoin to blockchain is nothing more than a marketing scheme.

The Transition from Bitcoin to Blockchain

The process of moving from Bitcoin to blockchain from a marketing perspective is quite simple. According to Michael Terpin, some startups have been told to simply resubmit their business plans from last year to investors after simply doing a search-and-replace for the word ‘Bitcoin’ in their original business plan. He explained:

“There was a panel I was on where someone said, ‘The new advice for companies is take last year’s business plan, cross out the word Bitcoin, put in the word blockchain, and resubmit it and you’ll get funded.’”

Brock Pierce also made it clear that this is mainly a change made for marketing purposes. He described that the basic terminology found in the Bitcoin world has been rather confusing in the past. In addition to the poor quality of the vocabulary in the Bitcoin space, Pierce also noted there are some negative associations among the general public with Bitcoin as a brand. He stated:

“Our fund, early on, changed the name, and it was also something [discussed] during Bitcoin Supper Clubs . . . It’s a marketing model. We used to call bitcoin (the currency) ‘bitcoin’, Bitcoin’s blockchain ‘Bitcoin’, and we used to call the technology or concept ‘Bitcoin’. It was a little confusing, especially in light of the kinds of bad headlines the industry had received. It made a lot of sense to sort of separate that distinction.”

The point about the bad headlines associated with Bitcoin may be a bigger problem than much of the Bitcoin community realizes right now, but Yang Ventures Founder and CEO Terrence Yang has stated this negative press may not matter if developers and entrepreneurs are able to develop some killer apps.

The Switch Has Appeared to Work

Although some in the Bitcoin community undoubtedly are not fans of this rebranding of the peer-to-peer digital cash system, it does seem to be working. Brock Pierce pointed out Wall Street’s recent embrace of the blockchain as evidence that this tweak to Bitcoin’s marketing strategy is working:

“It’s had a great impact. Look at Wall Street. Look at major financial institutions because their attitude is: Bitcoin bad, blockchain good.”

Abra may be one of the best examples of a Bitcoin company that was able to create a product that the average person may actually use via the use of the correct marketing tactics. The “Uber of money transfer” was able to take home the top prize at Launch Festival 2015, despite the fact that they never mentioned Bitcoin in their presentation.

What About Private Blockchains?

While Pierce and Terpin mostly focused on the point that some Bitcoin companies are simply rebranding themselves as blockchain companies, there are also still plenty of startups that are avoiding the Bitcoin blockchain completely. Perhaps the most well-known version of this trend is the interest in private, permissioned blockchains from various banks and financial institutions around the world.

[Read More: Gavin Andresen Understands Both Sides of the Bitcoin vs Blockchain Debate]

Near the end of this portion of the panel discussion, Michael Terpin decided to sum up the transition from Bitcoin to blockchain by taking a look at some of the conference banners from around the room. While a 2014 banner from this MecklerMedia conference read Inside Bitcoins, the screen next to it read Blockchain Agenda. Everyone seems prepared to move away from Bitcoin as a brand recently, but that does not necessarily mean these companies are moving away from the Bitcoin blockchain.