Shiba Inu has been one of the best performing meme coins lately. The ‘doge killer’ has garnered overwhelming buyer support over the past month, which has propelled it to new monthly highs. SHIB has gained by around 230% in just one month, and it seems like those gains are not slowing down.

Data from CoinGecko shows that Shiba Inu is the 12th largest cryptocurrency with a market cap of over $13 billion. This brings the meme coin closer to surpassing dogecoin, which ranks tenth in market cap.

If SHIB’s gains continue, we could see the meme coin heading towards the next resistance level of $0.00003. The coin has attempted to reach these levels in the past 24 hours but has faced rejection at $0.000029. During the coin’s bullish rally at the beginning of the month, it had managed to push to $0.000035. If buyer support is as strong as it was then, such highs could be achieved again.

The broader market support is strong, and as such, the bulls have a high chance of maintaining. This could allow SHIB to test its all-time high of $0.00003791.

On the other hand, the coin’s rally has mainly been due to buyer support. If selling pressure is triggered, we could see a major dip towards the lows of $0.000020. Dips in the broader market could also make SHIB go to the lows of $0.0000019.

The 24-hour SHIB rally has been attributed to a recent tweet by Elon Musk. The Tesla CEO created a post showing a Shiba Inu dog headed to the moon. Like what has happened before, Musk’s tweets regarding Shiba Inu always send the coin soaring to new levels.

Shiba Inu also recently ventured into non-fungible tokens by unveiling the Shiboshi NFTs. These NFTs were released on October 14, and they have been contributing to the SHIB rally. During the launch, 10,000 NFTs were sold out in minutes.

If you want to buy SHIB during the current bulls, you can create a cryptocurrency exchange account on eToro. eToro is one of the reputable exchanges, and it supports a wide range of cryptocurrencies and trading pairs. eToro also comes with a copy trading feature that allows a new trader to copy the trading strategies being used by expert traders. 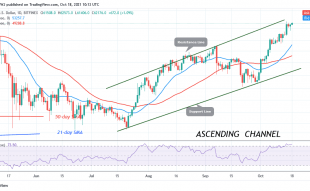