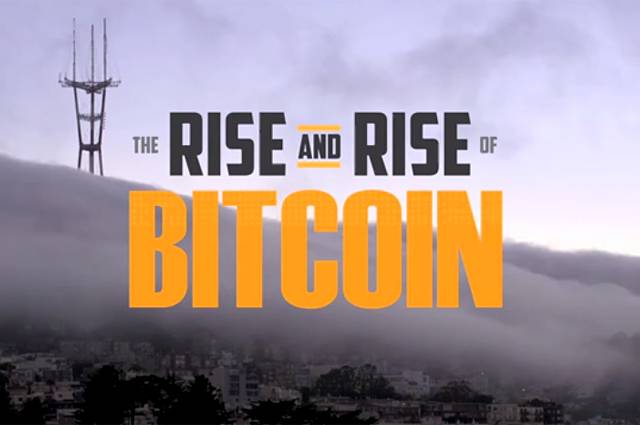 NEW YORK (InsideBitcoins) — It’s finally here. After months of screenings at various live events and complaints from the /r/Bitcoin community, everyone can now watch “The Rise and Rise of Bitcoin” online. Although the hype for this documentary has been building for quite some time, the ability for this film to teach newcomers about Bitcoin and allow early adopters to relive all of the ups and downs from the past few years makes it worth the wait.

This documentary from Daniel and Nicholas Mross shares the experience of an early Bitcoin adopter who has stuck with the world’s first major cryptocurrency through the rise of Silk Road, fall of MtGox, and all of the other craziness in the industry.

A crash course on Bitcoin

The Rise and Rise of Bitcoin feels like a crash course on Bitcoin more than anything else. In addition to covering most of the major events in the Bitcoin space, the film also attempts to educate the viewer on some of basics of the technology. The documentary’s answer to “What is Bitcoin?” could have been a bit better, but it’s nearly impossible to fully answer that question in a matter of minutes.

The importance of open source software and the fact that there is no one running a “Bitcoin company” are also explained to the viewer. “The Rise and Rise of Bitcoin” seems to be the best available documentation of Bitcoin’s move to the mainstream, and anyone who watches it should almost be able to feel what it was like to be there in the early days.

Perhaps my favorite quote in the film was when Gavin Andresen was asked about how he got into Bitcoin. He explained, “I really couldn’t convince myself that it would not work…Since then, I’ve been sucked down the rabbit hole.” There probably isn’t a Bitcoin enthusiast in the world who cannot relate to that statement.

In addition to covering the key news stories that many bitcoiners remember and providing a basic education of the Bitcoin technology, the film also touches on Bitcoin’s censorship-resistance. Silk Road and Wikileaks are mentioned as two of the first-use cases for Bitcoin, and they even interview a drug dealer who apparently used Silk Road for his illegal business operations. The bail-ins in Cyprus also illustrate the power of being one’s own bank.

While these various uses of censorship-resistant digital cash were shown throughout the film, there was a quote near the end that may rub certain early adopters the wrong way. After talking about how Bitcoin could prevent governments from stopping certain types of financial activity for a decent portion of the documentary, the main narrator, Daniel Mross, made a statement regarding Silk Road that didn’t seem to add up. While discussing the takedown of Silk Road, Daniel stated, “People have always tied the Silk Road to it. The media has always tied the Silk Road to it, as if Silk Road is Bitcoin. But it’s not. This may be a sign that Bitcoin is growing up.”

This was really the only part of the documentary that I found to be problematic. After all, if censorship-resistance is the point of Bitcoin, then Silk Road should simply be viewed as an illustration of that censorship-resistance. Bitcoin does not need to “grow up” and leave use cases like Silk Road behind. Silk Road is the point of Bitcoin. This short segment didn’t seem to jive with the overall message of the documentary, and it just felt out of place more than anything else.

Overall, I’d say this was a fine Bitcoin documentary, and the producers of the film do not deserve much of the criticism that has been sent their way by the Bitcoin community over the past few months. In reality, it seems that the target audience is actually the general public rather than the hardcore Bitcoin fanboys. I’d probably place it next to SQ1.tv’s “The Bitcoin Phenomenon” as one of the best documentaries available on the topic.

Whether you’ve been following Bitcoin since 2009 or you’re learning about cryptocurrency for the first time, you need to see “The Rise and Rise of Bitcoin”.

See a free two-minute preview of the film below.