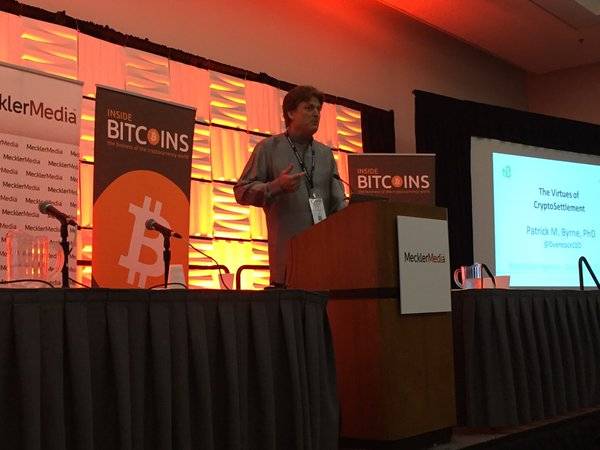 Permissioned blockchains have been one of the biggest trends in fintech lately, and R3 is the blockchain consortium that appears to have the largest amount of support from some the biggest financial institutions in the world. The firm has been met with quite a bit of skepticism in the Bitcoin community, with many of the digital payment system’s supporters claiming that the blockchain does not make much sense without some sort of underlying token.

[Read More: Gavin Andresen Understands Both Sides of the Bitcoin vs Blockchain Debate]

Overstock CEO Patrick Byrne was the final speaker on day two of Blockchain Agenda San Diego on Tuesday, and he shared his overall thoughts on Wall Street’s entrance into the blockchain world. Although Byrne does not appear to be completely tied down to the Bitcoin blockchain, it’s clear that he does not trust the entities behind R3.

Is Wall Street a Bigger Issue Than Regulation?

Bitcoin enthusiasts seem to be more frustrated with regulators than any other group of individuals on the planet, but Byrne seems to believe that Wall Street could be a bigger problem. During his talk at Blockchain Agenda San Diego, the Overstock CEO explained:

Byrne went on to claim Wall Street is going to try to slow down the Bitcoin revolution via R3. In his view, R3 is an attempt at creating a blockchain that could be brought to regulators as a legally-enforced standard:

Ironically, Byrne also claimed he wanted to join R3 at one point in time. He claimed, “We tried to join, but they wouldn’t let us join — even though we’re far ahead of everybody.”

The we Byrne is referring to in his statement is T0, which is Byrne’s own platform for settling trades almost instantly via the blockchain, as opposed to the normal T+3 window.

Later in his talk, Byrne went back to the point of R3 being a vehicle of regulatory protectionism. He noted:

“[R3] will just be a way of protecting entrenched interests against competition. So, I would very much like to cooperate with R3, only to keep it from being pulled in that direction.”

It’s possible Byrne’s past feuds with Wall Street have led to a lack of willingness by R3 to work with the long-time fighter of corruption in financial markets.

Near the end of his comments on R3, Patrick Byrne was able to explain how he really feels about the blockchain consortium. In his view, the organization is nothing more than an attempt to slow down any progress made by the Bitcoin community. He explained:

“In the last couple months I’ve gotten suspicious that it is a mechanism — well, it doesn’t have a characteristic yet. The character is being formed, but there are members of R3 who want to use R3 as a mechanism to slow us down while they come up with their solution — ‘us’ meaning this whole community.”

Byrne then went on to state R3’s connections with regulators and lawmakers around the world could eventually be quite useful for the group. He claimed R3 will eventually attempt to make their blockchain a standardized system that must be used by all other financial institutions. Byrne noted:

“And then they will get their version launched, and then they will — you know, these bankers have regulators and senators on speed dial. They’re going to call up and say, ‘Make it law that this is the standard system, and everyone has to conform to this system.’”

For now, it appears Patrick Byrne is not a fan of the R3 blockchain initiative. It’s still unclear exactly how Byrne’s T0 platform works at a technical level, but it’s possible the Overstock CEO’s love of decentralized systems is at odds with what is being built at R3.