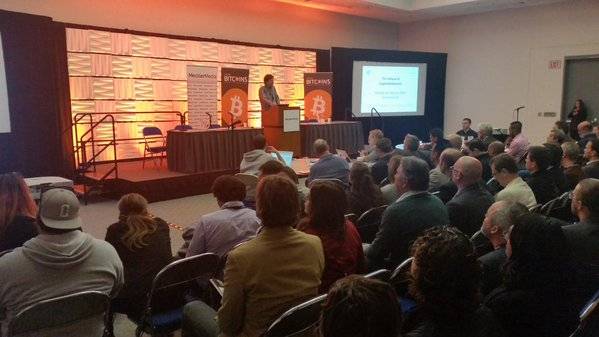 Overstock CEO Patrick Byrne gave the final presentation on day two of Blockchain Agenda San Diego in a packed room at the San Diego Convention Center. Everything from the current issues with trade settlement to his distaste for central banking was covered during the talk, but it appears that Byrne is not afraid of the legacy financial order blocking the proliferation of Bitcoin and blockchain technology over the next few decades.

[Read More: No Need to Wait for Overstock or NASDAQ, Veritaseum Already Put Wall Street on the Bitcoin Blockchain]

Throughout his talk, Patrick Byrne made the point that Wall Street has huge incentives to join the Bitcoin revolution and disrupt each other at a rapid pace.

Although there is no doubt that banks and other financial institutions do not like the idea of being cut out of their normal revenue streams, the reality is Bitcoin creates a prisoner’s dilemma where it makes sense for everyone to defect to the blockchain as quickly as possible. Byrne explained this point by pointing out that the three biggest groups on Wall Street can disrupt each other by making the first move:

“If you think of it as the three biggest groups being the banks, the exchanges, and the settlement system, one of the three can use this technology to disrupt the other two. That’s an awfully appealing incentive to defect — to defect from the old boy network.”

Wall Street is Already Reaching Out to the Bitcoin Community

Byrne also noted the low costs and high efficiency associated with the blockchain as two factors that have driven banks to the technology over the past year. In Byrne’s eyes, the opportunity to defect and disrupt each other is simply too great to ignore. He added, “I don’t think they’re going to stand shoulder to shoulder. You all know, they’re reaching out to us and this community.”

The Overstock CEO and driving force behind T0 noted banks are likely to at least attempt to delay the inevitable, but he also stated:

“They know this is coming. Some of them are going to defect first, and those ones who defect and join us first will be the ones five years from now having the biggest laugh.”

The Move to Bitcoin Will Happen Quickly

Due to the fear of being the last ones to join the party, Byrne also believes Wall Street’s move to Bitcoin and blockchain technology will happen rather rapidly. Byrne noted there are definitely going to be people on Wall Street who continue to hate the Bitcoin community’s love of disruption, but he believes the incentives to adoption blockchain technology themselves will eventually outweigh this hate. He explained:

“So like I say, there’s a reason for everybody to hate us — when I say us, I do mean us collectively. If you’re working in this world of Bitcoin and Wall Street, there’s going to be a lot of haters. But there’s such incentives for somebody to defect and join us. And I think you’re going to see that happen in 2016 en masse. And once it starts happening, it’s going to happen quickly.”

Byrne’s contention that this move to the blockchain will happen quickly sounds somewhat similar to Satoshi Nakamoto Institute Head of Research Daniel Krawisz’s theory of hyperbitcoinization. The fear of missing out can be a powerful phenomenon when it comes to protecting one’s wealth, and the fact that essentially every bank is now working on a blockchain strategy could be evidence that this trend is just starting to heat up.