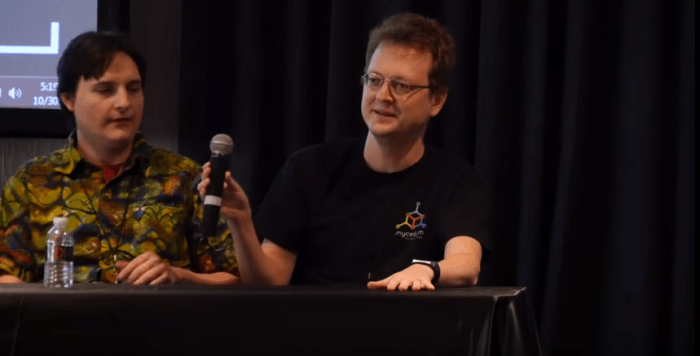 At the recent Bitcoin Investor Conference in Las Vegas, one of the panel discussions focused on what will happen with Bitcoin over the next ten years. Mycelium’s Dmitry “Rassah” Murashchik was one of the participants on this panel, and he offered an interesting perspective from a company that is focused on offering Bitcoin-related products and services that retain the digital cash system’s promise of decentralization. Although he was not willing to make any serious predictions on the bitcoin price, Murashchik did make one bold claim about how many people will be using the blockchain by 2025.

[Read More: Dmitry Murashchik on the Future of Mycelium and Bitcoin Wallets]

All Asset Ownership on the Blockchain

The idea of smart property has been around in the Bitcoin space for quite some time, and Dmitry Murashchik believes this idea of putting all of one’s assets — physical and digital — on the blockchain is one that will take over the world in ten years time. During the panel discussion, he noted:

“I expect that people’s identities, money, [and] any kind of asset ownership will all be registered in the blockchain within 10 years.”

Any asset can be securely stored and transferred via the blockchain, and one’s identity can also be viewed as an asset in certain respects. Companies already working on these particular use cases of the Bitcoin blockchain include Onename and Coinprism.

Another key prediction made during Murashchik’s remarks on the future of Bitcoin had to do with changes that will take place in the smartphone industry. Trusted execution environments are already finding their way into some smartphones today, but Murashchik believes that this trend will accelerate over the next ten years. He explained:

“Everybody will have devices that are dedicated to storing hardware keys, so it will be hardened hardware devices that are first and foremost there to prove who you are, prove how much money you have, [and] how much you own — and as a secondary feature, they’ll also run your video games and other junk.”

These sort of hardware devices should definitely be viewed as a requirement for Murashchik’s vision of placing all assets on the blockchain. Placing colored coins, identities, and other forms of smart property on top of the Bitcoin blockchain will only make sense if those assets can be properly secured by users.

Hoping for a Ubiquitous Bitcoin Blockchain

In addition to providing a prediction on what will happen in the future, the participants in this panel discussion at the Bitcoin Investor Conference were also asked to talk about what they hope to see happen over the next ten years. Murashchik described his desire for bitcoin to become as commonly used as email is today:

“There’s a thing called speculative attack. I suggest you Google ‘bitcoin speculative attack’. If that should happen, we’re all going to be rich — if you have bitcoin. Effectively, people realize that bitcoin is a much easier, more convenient, and cheaper-to-use currency than anything else . . . At that point, all business, commerce, [and] interaction will be just as open across the entire world as email is today, so borders basically become meaningless.”

Dmitry Murashchik will participate on the P2P Transactions and Digital Wallets panel at Blockchain Agenda San Diego with Inside Bitcoins. What do you think of Murashchik’s predictions? Share your thoughts in the comments section below.