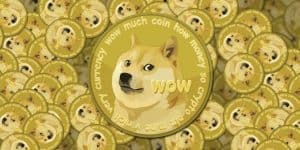 Elon Musk, aka the Dogefather, is undoubtedly the most prominent cheerleader for Dogecoin, and because of his tweeting efforts, the price of the token has increased by 1,400% since the beginning of the year – and now Tesla could be adopting it for payments.

Musk’s tweets have a huge impact on the broader cryptocurrency market. When the billionaire tweeted that Tesla would no longer accept Bitcoin payments, around $300 billion was wiped off the crypto market, while Bitcoin sunk to almost $46,000.

The crypto markets has found firming footing today, with Ethereum back above $4,000 and bitcoin trading at just above $50,000.

Interestingly, a day before Musk’s bitcoin u-turn tweet, he had asked his 54 million followers on Twitter whether Tesla should start accepting Dogecoin for payments. “Do you want Tesla to accept Doge?” Musk tweeted.

Do you want Tesla to accept Doge?

Going by the current price of DOGE, one would need around 80,000 of the tokens to purchase the Tesla Model 3, which is the cheapest of the line-up.

After Musk posted his poll on Twitter, more than 3.3 million users responded to the survey in 12 hours. 80% of the respondents stated that they supported buying Tesla with Dogecoin, while around 20% did not.

‘Dogecoin for Tesla’ poll comes just a few days after the billionaire said that SpaceX would start accepting Dogecoin as a payment option, ahead of the Lunar mission launch in 2022.

Elon Musk has been under scrutiny in the past from the SEC because of his tweets. However, his recent views about Bitcoin, Dogecoin, and other cryptocurrencies are yet to land him in trouble with the US regulator. His tweets affect the values of cryptocurrencies, and this may look like market manipulation.

His tweets may have previously helped lift crypto markets, but the same cannot be said for Tesla stock. The bullish rally in the shares has come to a halt. Tesla’s shares have dipped by 1.3% and are currently priced at $621 per share. One of its largest markets is China, where Reuters has reported that the EV vehicle manufacturer would no longer purchase land to expand its Shanghai manufacturing plant.

Data provided by Coinmarketcap shows that Dogecoin is trading at $0.53, a 28% jump in the past 24 hours.

Since last month, the token has risen by over 700%, and it has become the fourth-largest cryptocurrency in terms of market cap. Its all-time high was reached on May 13 when the coin was trading at around 73 cents.

Unlike Bitcoin, which has a limited supply, Dogecoin has an unlimited supply. The rush of retail investors into the meme coin has made DOGE highly volatile, even by crypto standards.

As the cryptocurrency market crashed following Elon Musk announced that Tesla would no longer ...

Azeez Mustapha•7 hours ago
Last Updated:•7 hours ago
Russia Cracks Down on BTC by Slowing Deposits to Exchanges