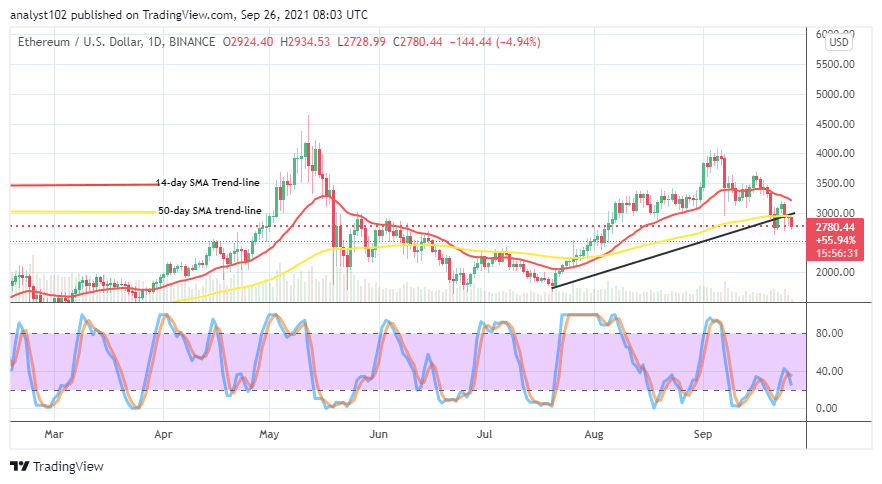 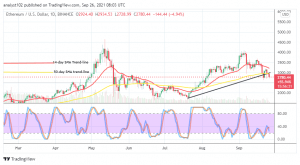 Trade Holds Lower at $3,000– September 26
It’s presently on the record that the ETH/USD trade holds lower at $3,000 level after inability to surge further upward above the historic psychological trading line. The market’s percentage rate of trading as of writing is about -4.94%, as price trades around the level of $2,780. It appears that some degrees of selling force are still obtainable.

ETH/USD – Daily Chart
The ETH/USD chart depicted that the crypto trade holds lower underneath the level of $3,000 as price pushes in defiance of the positioning of the bigger SMA with the bullish trend line drew in a supportive posture to it. The 14-day SMA indicator has slightly bent southward above the 50-day SMA indicator to signify a downward force present in the market. The Stochastic Oscillators have crossed the lines southbound at range 40. That adds to the trading fact on grand that the market is under selling pressure.

As ETH/USD trade holds lower at $3,000, what could be the next price direction?

It now appears that the psychological trading line at $3,000 will play a vital role in the determination of the following active trading sessions as the ETH/USD trade holds lower beneath it presently. However, regarding the upside of this market, the more-lower value around $2,500 will be the focus trading zone that bulls may have to be on the lookout for to place a buy position, especially while the market makes a notable rallying attempt.

On the downside, a pull-up coupled with a rejection around the $3,000 level needed to give the ETH/USD market bears a better hedge against the crypto’s upside motion. Sellers needed to be wary of late position entry to avoid the undue whipsaw-trading moment. In addition, the support level at $2,500 may not be technical okay for holding selling positions for a long time even if a forceful-downward force emerges against it in the aftermath trading situation. 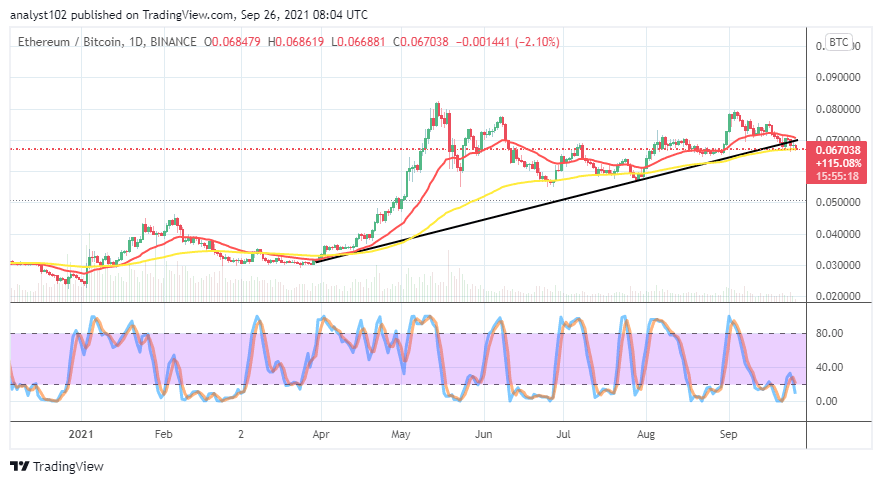 Comparing the trending capability between Ethereum and Bitcoin, the price analysis chart depicted that the cryptocurrency pair trade holds lower, relatively around the bigger SMA indicator. The 14-day SMA trend line slightly bends above the 50-day SMA trend line. There is a formation of smaller candlesticks around the bigger SMA. The Stochastic Oscillators have briefly crossed the lines below range 40 against the range of 20. The base crypto hasn’t come out of losing of stance as paired with the flagship counter crypto. Nevertheless, it is expected of ETH to regain its trending outlook in the near time as paired with BTC. 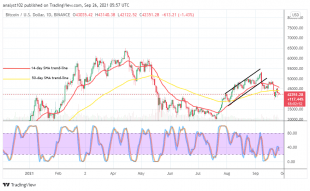 Bitcoin Price Prediction – September 26The BTC/USD market now features above the level of ...