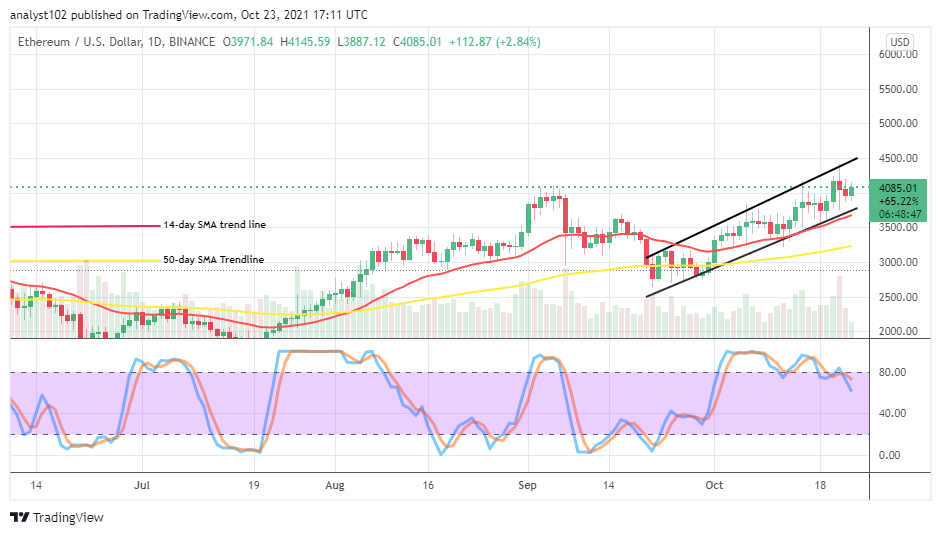 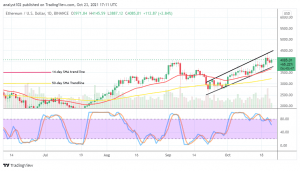 Price Trades at $4,000 – October 23
The ETH/USD price trades around the level of $4,000 as there have been differential activities taking closely beneath a higher line of $4,500 in the recent past. The crypto, as of writing, records a percentage rate of about 2.84, featuring around $4,085.

ETH/USD – Daily Chart
The ETH/USD daily chart reveals that the crypto-economic price trades around $4,000. The value line is also in the bullish channel trend lines. The 50-day SMA indicator is beneath the 14-day SMA indicator. The lower bullish trend line drew alongside the smaller SMA to affirm that the actual support point lies between $3,750 and $3,500. The Stochastic Oscillators had lately swung in the overbought region. But, they have now protruded the lines briefly southbound against the range of 80. That suggests that a southward force may prevail soon in the market.

Can the ETH/USD market, this time around, survive breaking northward beyond $4,000 as price trades around it?

There has been a tangible motion to project that the ETH/USD market operation is struggling to achieve higher levels in the subsequent trading sessions and price trades around $4,000 for the second time ever after the early September trading days’ sessions. It could be necessary that some degrees of depressions be allowed to occur around lower trading zones so that prices can find support after a while.

In the southward direction of the market, selling pressures have to get intensified at around $4,000. Several price actions rejecting around the resistance level at $4,250 will lead to another round of slippages in the crypto price valuation. Being as it is, the crypto market still wears a bullish outlook. Bears are to be cautious of their re-positioning 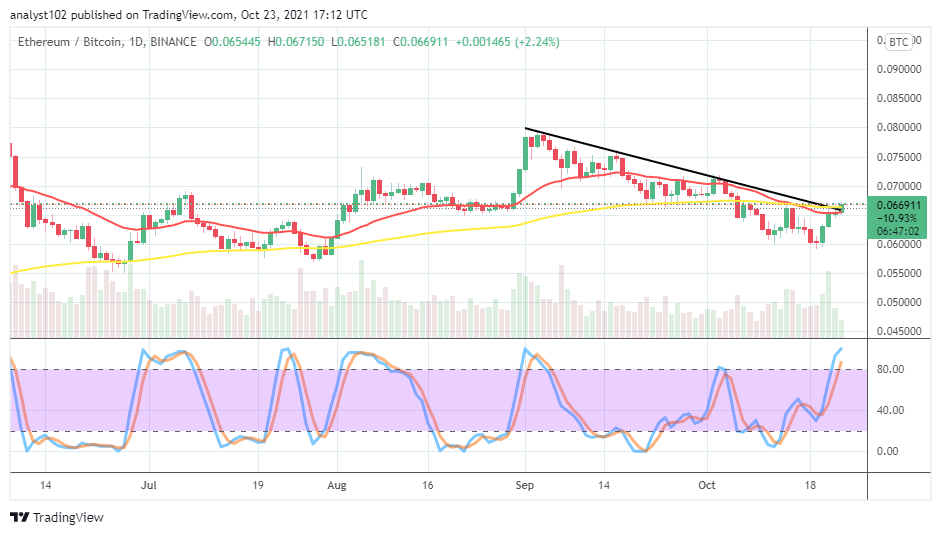 In comparison, Ethereum, as the base crypto, has been significantly striving to push against Bitcoin as the duo cryptocurrency price trades around the trading tools, briefly moving to the north side. The 14-day SMA indicator had in the recent past intercepted the 50-day SMA indicator from the top. But, now trying to cross back the lines northbound as a bullish candlestick appears in the making. The Stochastic Oscillators are in the overbought region, seemingly attempting to close the lines in it. That could mean that the base crypto may begin relaxing in its efforts to trend higher against its flagship counter crypto. 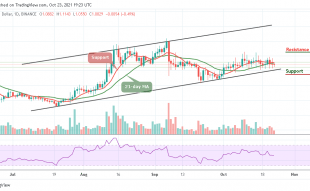 Ripple Price Prediction – October 23 The Ripple price stays below the 9-day and ...