You may dismiss the term ‘Uptober’ as just a joke, self-interested or even playful. But if the charts are anything to go by, then you might want to re-think your stance. Ethereum, the largest altcoin by marker cap, rose by approximately 11% on Friday. The Ethereum price rose from $2,792 to highs of $3,336 on Friday October 01. Since then ETH has declined lightly to the current price at $3,301.

Ethereum’s rise followed Bitcoin, the flagship cryptocurrency, which also rose by about 11% on Friday. Bitcoin hit a high of about $48,412 on October 01 before sinking to the current price around $47,715. 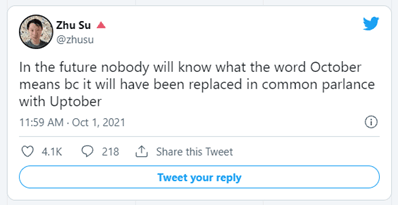 The crypto market cap swelled at the beginning of what traders as calling ‘Uptober’. The success of the top coins led by Ethereum and Bitcoin saw the global cryptocurrency market capitalisation jump to approximately $2.1 trillion, a 1.76% increase over the last 24 hours according to data from CoinMarketCap.

“Uptober” appears to be fuelled by a number of a couple of issues. The first is the China triggered FUD driven by the country’s continued ban on all cryptocurrencies. This has forced a good number of Chinese traders shift to Decentralized Finance (DeFi). A lot of the Chinese crypto traders moved their money to the dYdX DeFi protocol. According to a report by Colin Wu, Chinese crypto-journalist, dYdX’s coin has rallied more than 90% over the last 7 days.

The second is the positive news from the US the world Super Power was not banning cryptos. According to the Federal Reserve Chair Jerome Powell, the US had “no intention to ban” cryptocurrencies. Powell told the congress on Thursday that the State would treat stable coins differently affirming that stablecoins issues should be treated like banks. He said:

“Stablecoins are like money market funds, they’re like bank deposits, but they’re to some extent outside of the regulatory perimeter. And it’s appropriate that they be regulated. Same activity, same regulation.”

The Fed Chair’s comments on cryptocurrencies were enough to get “Uptober” started.

Ethereum Price Could Explode To $4,150

At the time of writing, the Ethereum price is trading up 3% over the last 24 hours at its to the current price around $3,301. ETH is trading slightly above the descending parallel channel and mounting pressure from the upper boundary of the channel at $3,332 threatens to keep the crypto lower.

A closure above this point could very well set the smart contracts giant on a path towards $4,150, embraced by the tip of the upper boundary of the descending channel.

This bullish outlook is accentuated by the upward movement of the Moving Average Convergence Divergence (MACD) indicator. Note that the MACD has sent a buy Ethereum signal. This happened yesterday when the MACD line crossed above the signal line indicating that Ethereum’s market momentum is positive.

Also note that the Stochastic RSI’s entry into the overbought zone indicates that the bullish momentum is strong since the bulls are in control of the Ethereum price.

Of the flipside, if ETH slides back into the descending channel, it may drop to tag the $3,000 psychological level. A drop further may see Ethereum decline towards the 100-day Simple Moving Average (SMA) or the 200-day SMA at $2,810 and $2,656 respectively.

Looking to buy or trade Ethereum? Invest at eToro!

Join Our Telegram channel to stay up to date on breaking news coverage October ...