eBay has been one of the first and most prominent E-commerce marketplaces that connect buyers and sellers directly for several years. As an organization, it has been known to keep up with trends and follow generational changes with time, with its most recent endeavour being owning the famed NFT marketplace KnownOrigin. Read on to know about the two parties and the business deal.

About eBay and KnownOrigin

Based In San Jose, California, eBay records an average of around $2 billion worth of transactions every day. The Ecommerce organization was founded in 1995 by entrepreneur Pierre Omidyar. It was one of the few platforms that survived the dot com bubble. Currently worth around $23.68 billion, eBay is one of the most popular sites preferred by millions of people all over the world to buy or sell directly. It is also known for giving back to its local charity trust, the eBay Foundation.

Among a plethora of choices, KnownOrigin is one of the most popular NFT marketplaces. This marketplace, founded by David Moore, James Morgan and Andy Gray claims to aim for a safe, secure and trusted environment for every NFT enthusiast out there.

The platform was launched in 2018 at a pop-up event in Manchester. It has facilitated transactions worth more than $7.8 million since its inception. KnownOrigin has been backed by huge investing firms like GBV and Sanctor Capital with cumulative investments of around $4.3 million. The project had previously been popular for its partnerships with industry-leading companies like Netflix, Adobe and Adidas.

Details of the Acquisition by eBay

The news about the acquisition of KnownOrigin was announced in a press conference held on Wednesday. While more details on the deal are yet to be announced, there is clarity on the matter that eBay intends on acquiring all of KnownOrigin. This means total rights to the team, infrastructure, and other assets of the project. However, the buying price has not yet been disclosed by either party.

eBay had enabled the sale of NFTs on its platform on some level since last year itself. However, access to a proper marketplace that has already generated trust and a viable audience will only aid the platform in potentially creating a better NFT space for its users.

It will also help in ensuring the fact that every transaction will be recorded and properly monitored. The Ecommerce giant has been aggressively trying to capture the collectable business for the last two years and has been bringing about various changes and features to aid this. The NFT-buying endeavour can be expected to be for the same reason.

This announcement came following eBay’s very own first-ever collection of NFTs as it partnered with Tezos and the NFT platform- OneOf.

Jamie Iannone, the CEO of eBay said that this partnership will ensure that eBay remains the leading site for digital collectables and will nurture the company in a progressive way.

David Moore, co-founder of KnownOrigin also stated his satisfaction with the advancement, stating that 25 years of experience is only going to help them grow further alongside a community that is like-minded and is looking to grow consistently. He added that the partnership will attract a chunk of new artists to the platform. 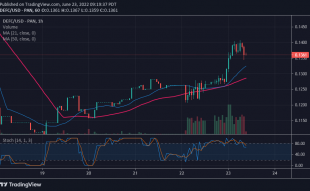 Defi Coin Price Forecast: DEFC Is in a Fresh Rebound as It Poises to Reclaim $0.3000