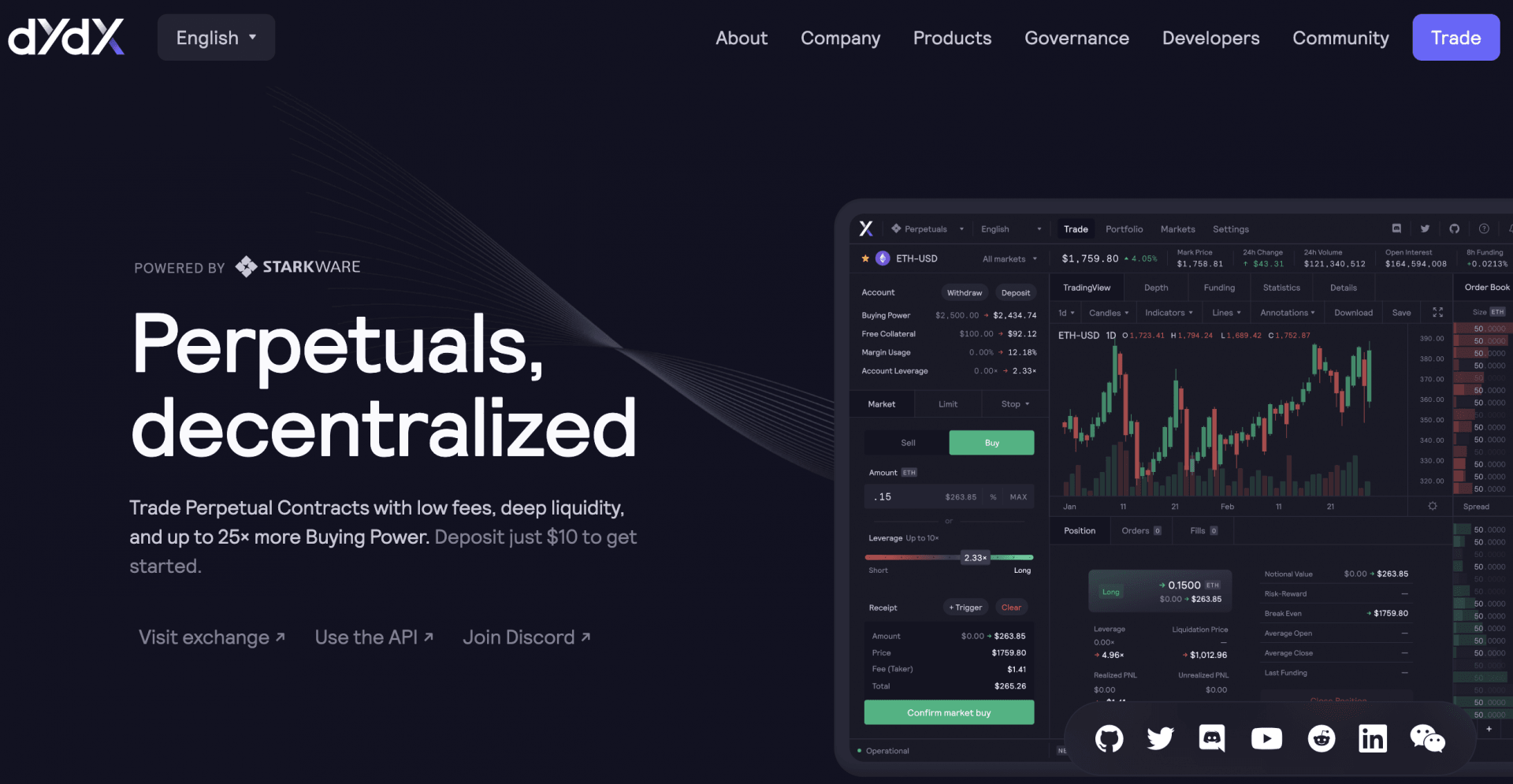 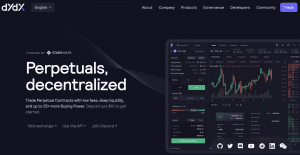 Crypto derivatives-focused decentralised exchange dYdX released its governance token (DYDX) on 8 September after an airdrop to users and its been on fire ever since. The token began trading at $11.84 and is currently priced at $26.41 for a 120% return.

The Airdrop to users of the DEX began on 3 August this year and will continue for 5 years – a plan that will serve to incentivise trading activity on the exchange and attract new traders. The full schedule can be found here.

The platform lists the full range of crypto derivatives including the popular perpetual contracts first pioneered on centralised exchanges such as Hong Kong-based BitMEX founded by Arthur Hayes.

If you are new to cryptocurrencies and want to learn about how to buy crypto, then check out our guide.

dYdX is the No. 1 DEX by trading volume

dYdX has been putting on impressive trading volume and last week saw more money passing through it than on Coinbase Global. Last weekend’s action may have been driven by interest from Chinese investors and traders looking to circumvent new Chinese rules banning all crypto transactions, including on offshore exchanges.

Unlike on conventional DEXes, dYdX deploys an instant-execution orderbook instead of a swap mechanism. Although there are only 13 assets traded on the DEX it is now the No. 1 DEX by trading volume according to Coinmarketcap. Current 24 hour volume is $1.98 billion, giving it a market share of 28%.

Trading volume in the DYDX governance token as distinct from the exchange. In the chart below from Messari, a ‘Real Volume’ methodology is applied that controls for wash trading. 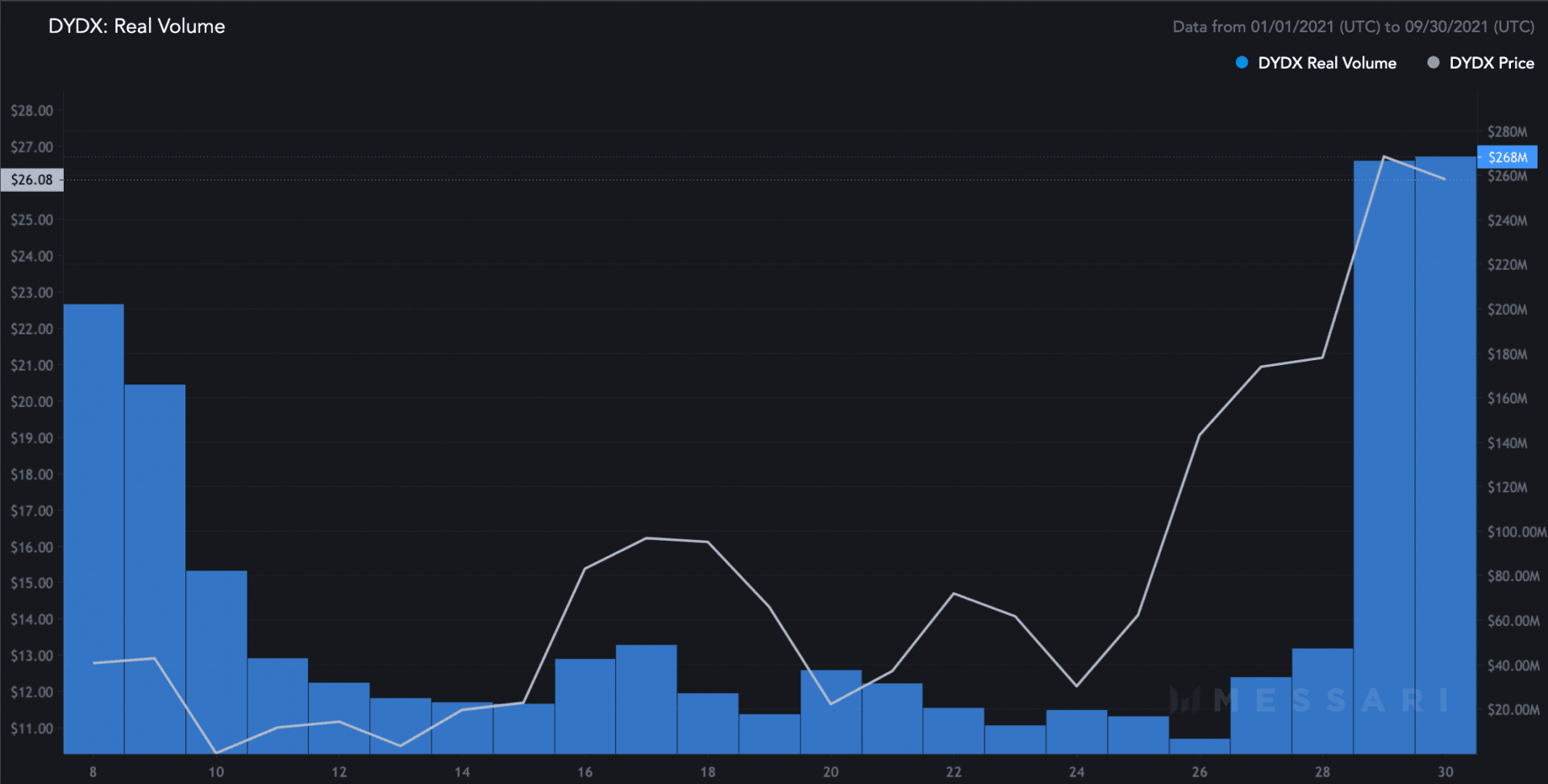 DYdX also provides interest-bearing products through the lending and borrowing features of its protocol. Leverage on perpetuals and spots is up to 25x and 5x respectively.

Traders have flocked to the DEX because of its perceived advantages over centralised exchanges.

Trading derivatives on a DEX is more transparent

Another vexing issue is insurance and the failure to disclose the true extent of those funds.

With dYdX liquidation mechanism is out in the open, although the insurance is not decentralised as yet but is on the roadmap, with the dYdX team currently managing  deposits and withdrawals to and from the insurance fund.

Also the cost of trading is much less on its Ethereum Layer 2 platform (Starkware), because there are no gas costs associated with trading. Stark uses Zero Knowledge rollups to bundle transactions into batches before sending to the Ethereum blockchain.

Thinking of buying ethereum as an investment in the revolutionary potential of DeFi, then read our guide.

The exchange began life in 2017, when it was founded by Antonio Juliano. After experimenting with margin tokens, which was later abandoned, the project settled on the Solo iteration of the protocol, which incorporated many of the learnings from the testing and initial mainnet rollout.

Its decentralised and non-custodial approach to derivatives arguably makes it a more attractive venue for traders fo a number of reasons.

Last year it launched its perpetuals after completion of a $10 million Series A funding round. Investors included Andreessen Horowitz, Polychain, Bain Capital Ventures and Coinbase CEO Brian Armstrong. In 2021 it completed its Series B and Series C rounds bringing total funds raised to $75,000,000.

DEX’s are fast-growing area of DeFi. A new DEX – DeFi Swap – from DeFi Coin (DEFC) is currently being tested and the mainnet will be launching soon.

Where to buy DYDX

The main exchanges for trading DYDX are currently Binance, Huobi, Uniswap and OKEx.

Binance has the lion’s share of the trading volume in the coin. trading cost 0.1% but if you use BNB then a discount is applied, making it even cheaper.

eToro does not have a market in DYDX at this time but may list it as interest in the DEX coin grows. For example it already lists Uniswap. 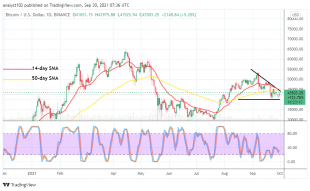