The gaming sector has always been one of the most profitable and successful industries over the years.

Expected to grow at a compound annual growth rate of around 12.9% till 2030, gaming is clearly a thriving industry with much more room for growth.

While there are several genres of games available for players to choose from, one that has attracted major traction lately is Fantasy Sports Games. Thousands of people all over the world have embraced this category due to the strategic factor required as well as money that can be earned as a result of playing the game.

What are Fantasy Sports Games?

A fantasy sports game, in simple words, is a platform where players create an imaginary team of their own based on real-life sportspersons. These imaginary teams could consist of sportspersons from both teams that are competing in a real-world tournament.

Each sportsperson is then given points based on their performance in the match that is held in the real world. These points are then awarded to the players who strategically added the respective players into their fantasy roster.

The players with the highest amount of points win the match and get a majority of the pot money, while the platform takes a small commission. This pot money is accumulated using the entry fee required for each player to enter a contest within the game. These points can be converted to real money later on.

This category of games saw a massive spike in popularity over the past four years, and major fantasy league platforms have managed to partner with some of the biggest sports companies in the world.

Out of several other options in the market, Dream 11 has positioned itself to be one of the most played Fantasy Sports Platforms in the world, and the biggest in India. The website allows players to create teams for sports like cricket, football, hockey, kabaddi, basketball and handball.

In 2019, the game made headlines as it became the first Indian gaming company to become a unicorn. Founded by Harsh Jain and Bhavit Sheth in 2008, Dream 11 now caters to more than 130 million users in and out of India.

Some of the biggest tech investment companies have backed the organization, such as Kalamari Capital, Multiples Equity and Tencent. The government too supported the idea of Dream 11 since its inception, and considers the website to be a “game of skill”. As a haven for sports fans, Dream 11 is expected to grow consistently in the coming years.

Sports enthusiasts are all over the world and are constantly looking for opportunities to be a part of the sectors that use skills required to manage a fantasy team or be a sportsperson. This is why it has been noticed that they have a high affinity for cryptocurrency.

Similar to choosing the right game by thinking strategically, it is important to have the proper knowledge and updated information about cryptocurrencies to invest and gain great profits.

While several fantasy games have popped up in recent years, the blockchain industry was yet to receive a good choice. This has now changed with a league from the Battle Infinity project, which is sure to attract users that dabble in cryptocurrency and games like Dream 11.

Battle Infinity is one of the top grossing projects to roll out that focuses on being the top P2E gaming platform. It caters mainly to creators and gamers and features 6 major products.

World’s first decentralized blockchain NFT-based sports game. Players can build teams strategically and win money in the form of IBAT, which is the native token of the Battle Infinity platform.

This is the decentralized exchange of the game, which lets users swap their cryptocurrency for IBAT tokens.

Since the project is built on the Binance Smart Chain, every in-game asset can be tokenized into an NFT format. These NFTs can be traded easily on the Battle Market.

IBAT Battle Games acts as the game store of the project and features several multiplayer P2E games that can be played to gain valuable NFTs or money.

Being true to its Metaverse nature, Battle Infinity’s Battle Arena allows users to create a virtual avatar of themselves. Any accessories like hats or glasses for your avatar’s look can be bought from the Battle Market.

It is the staking feature available on the website. Users can lock up their IBAT tokens to earn interest while gaining other benefits on the platform.

Headed by the CEO and founder Suresh Joshi, Battle Infinity has ample experience within the sports industry as well as the cryptocurrency markets. The Indian team behind the project has a deep understanding of how fantasy games function and has a tech background.

The project’s presale has been audited by Solid Proof and Verified by CoinsniperKYC. The developers of Battle Infinity aim to “revolutionize the traditional world of gaming” and hope to achieve this by sticking to their ambitious roadmap that could potentially popularise the project even more.

IBAT, the native currency of the ecosystem has a fixed supply of 10 billion tokens, with a presale price of $0.0015. The presale which is currently live on the project website is expected to run until early October 2022. 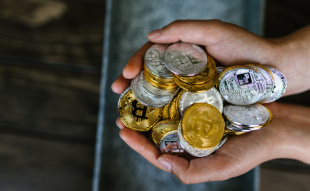 A recent survey carried out by US Federal Reserve Board revealed that most of the officials ...