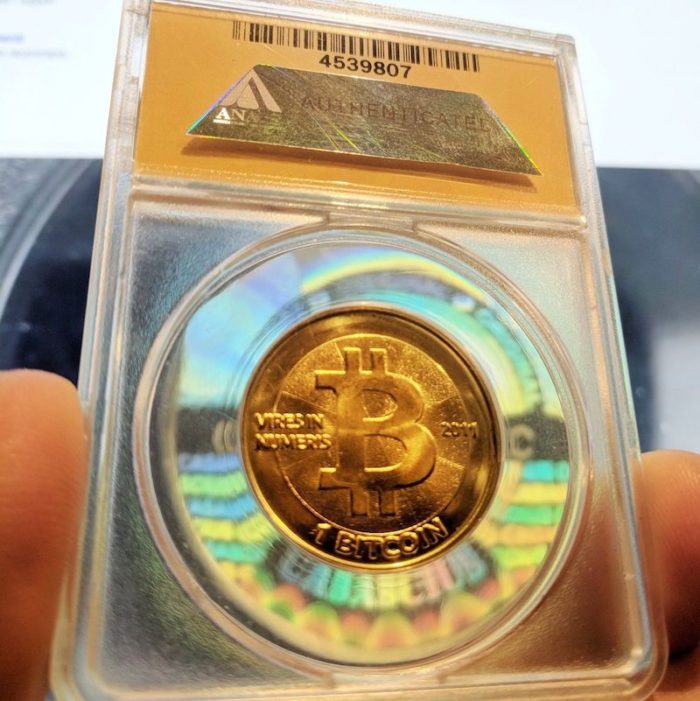 A Casascius 1 BTC physical bitcoin today sold at auction for $28,700 USD, its new owner paying a premium of over $13,000 on its current (BTC) market value. The sale highlights bitcoin’s additional value as a collectable — both the physical coin itself and the “purity” of an unmoved, 2011-mined coin.

Notably, as a pre-August 2017 bitcoin the private keys also contain Bitcoin Cash (BCH) value, boosting its market value a further $2,600 or so (at press time). Other valuable hard forks (e.g. Bitcoin Gold) may add smaller increments to that. However the buyer still paid a hefty premium for the coin’s less-quantifiable collectable and mint value.

The auction finished on eBay on Friday night local time, with 166 bids. The coin itself was certified genuine by U.S. numismatic coin grading service ANACS to MS 65 standard (near mint grade), and comes sealed in a plastic box. Its original BTC value is also intact, sealed as a private key on a slip of paper to the coin’s surface with a Casascius tamper-evident hologram sticker.

Why Casascius Bitcoins Are Collectable

Casascius coins are legendary in the Bitcoin world. Named after their creator Mike Caldwell’s online handle, they were popular as gifts and collectables and available in 1, 10, 25, 100 and even 1,000 BTC denominations.

A FinCEN ruling in late 2013 deemed minting and shipping physical bitcoins as a money transmitter business, which would have required Caldwell to obtain federal and at least 48 state-level licenses. Rather than do that, he shut down the business.

Ironically, the prohibition only increased the value of the remaining coins, particularly those with the original BTC keys intact. Geniune Casascius coins even without BTC value are collectable among bitcoin fans simply due to their name and rarity. Ebay listings for other physical bitcoins often include the word in their description to attract more attention.

Why ‘Mint’ Bitcoins Are Worth More Than Spent Ones

The sale also demonstrated that “mint” bitcoins — i.e. those that have never been “spent” after being mined other than from the miner’s own wallet — have value additional to other bitcoin amounts. Often discussed in bitcoin circles, the collectable and monetary value of mint BTC is something few outsiders appreciate.

The actual Casascius coin that sold for +$28K

BTC value that has circulated within the network is traceable and their owners at some risk of being personally identified, especially as the field of blockchain forensics advances. A determined researcher with extensive resources could cross-reference blockchain transaction data with external data like timezones, social media post and purchase receipts to unmask a spender.

This history is often referred to as coin “taint”. At regular intervals law enforcement and other services like CoinValidation have discussed bitcoin “blacklisting” or “whitelisting”. This could block bitcoin that was once involved in a crime, or used to fund an illegal purchase. For comparison, imagine if banks refused to recognize the reported 90 percent of $100 bills containing traces of cocaine, or certain serial numbers.

A physical bitcoin with embedded value can be moved anonymously, like cash. And the lack of “taint” makes it virtually anonymous. That could be useful to someone willing to pay extra to cover their financial tracks.

BTCC recognized this in its online store (which is currently not selling product). Its “mint” physical coins sold for premiums higher than