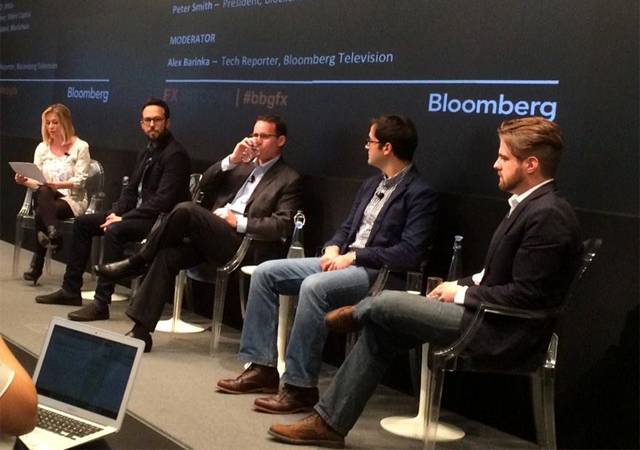 NEW YORK (InsideBitcoins) — Bloomberg, the noted financial information provider, is hosting a conference at its headquarters in New York today entitled, “Bitcoin: Beyond the Currency.” Covering the event is Inside Bitcoin’s Jacob Cohen Donnelly, who is filing updates from the event:

Included on the initial panel for the day, “Bitcoin as Technology,” was Will O’Brien, CEO of Bitgo, who offered a an optimistic view on where bitcoin is going over the next few years, but specifically said that 2015 is going to be a very big year for the cryptocurrency.

“Next year there will be massive consolidation of all these bitcoin companies,” O’Brien predicted, referencing the industry startups – small and large – that have been the beneficiaries of investment capital. Not only the high-profile companies that have accounted for the more than $300 million in venture capital investments so far this year, but also the small, incubated companies that might have raised just $250,000-$500,000. O’Brien predicted that these companies are likely to be absorbed by the larger players.

However, Peter Smith, president of Blockchain, offered a more conservative view on where the industry is right now. His concern is based on the fact that there simply aren’t enough people working on bitcoin technology yet.

“There’s already a shortage of developers in technology, but then there’s even fewer developers who understand bitcoin,” Smith explained. “One thing the industry can do better is getting developers interested in bitcoin and getting them hacking on it. We need more horsepower.”

“I worry about regulation, but in twenty-five years, this will be the backbone of our financial systems. It is unstoppable.”

Because of that, he argues that companies need to hire eight months prior to the time a person is actually needed. Companies don’t want to get caught in a scenario where they do not have enough staff to do the required work.

But as with any gathering of bitcoin insiders, the question always arises: where could the price be next year?

“The price will rise, there will be more people getting into bitcoin, I am very excited about 2015,” O’Brien said.

“I believe it could be at $1,000 in the next twelve months, due to the growth in the number of transactions. I predict those transactions to continue on their trajectory and the price will rise with that,” said panelist Nick Shalek, partner at Ribbit Capital.

“I think people are comfortable in the $350-$450 range, and believe it will be there for some time,” Smith offered.

Nearly half of the people in the room, though, believed the price of bitcoin would be at least $500-$1,000 over the next twelve months.

“I worry about regulation, but in twenty-five years, this will be the backbone of our financial systems. It is unstoppable,” O’Brien added.