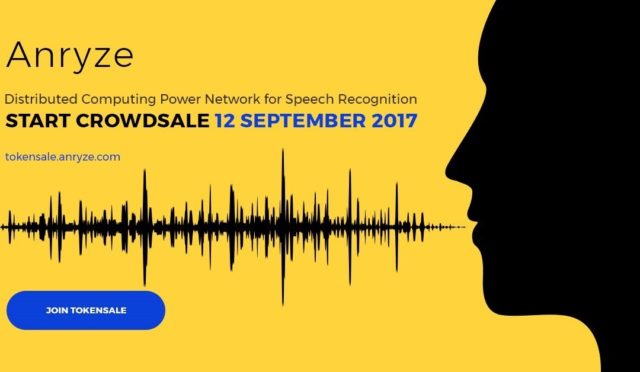 Blockchain speech recognition start-up Anryze has announced their target of at least $6 million for their imminent token sale. The company’s crowdsale will aim to raise funds to develop their speech recognition further and also expand their service into new markets. Anryze will create 300 million RYZ tokens, which the company’s lead developers expect to sell for a total of $6 million (USD). The crowdsale is scheduled to begin on 12 September.

[Note: This is a press release.]

The company’s ‘speech to text’ service already works with Russian and English audio. Once the token sale is completed Anryze has plans to work on the addition of Chinese, Spanish, and German. In addition to this, the company plans to expand into the relevant markets in parallel to this development process.

The Anryze platform’s native RYZ token allows its users to purchase speech-to-text services for a given duration of audio. The cost of one RYZ token has been made equivalent to that of one minute of audio processing. The number of RYZ tokens is finite, which, combined with the company’s growing user base, and processed minutes of audio, will increase the value of the token over time.

Anryze token holders will also be eligible for a share of the revenues from each transaction the network processes. 20% of the fees for audio processing will be distributed proportionally among token holders. The company has been engaged in developing blockchain technology for speech analysis and recognition since January 2016. The team’s founding members consist of Anton Gerasimenko, Mikhail Yezhov, and Oleg Zaychuk, all of which boast around five years’ experience in the industry.

In February 2017, the Starta Accelerator investment fund bought 7% of shares in the company for $130,000 and estimated the company’s value at 2 million USD. The speech recognition and analysis market is well established and is being invested in by large companies like Google and IBM.

Through the implementation of blockchain technology and neural networks, Anryze is able to offer a competitive product at a price that is currently 2 to 3 times lower than its counterparts.

American brokerage agencies are the platform’s initial customers, and at this time new users are not being connected to the platform due to technology updates.