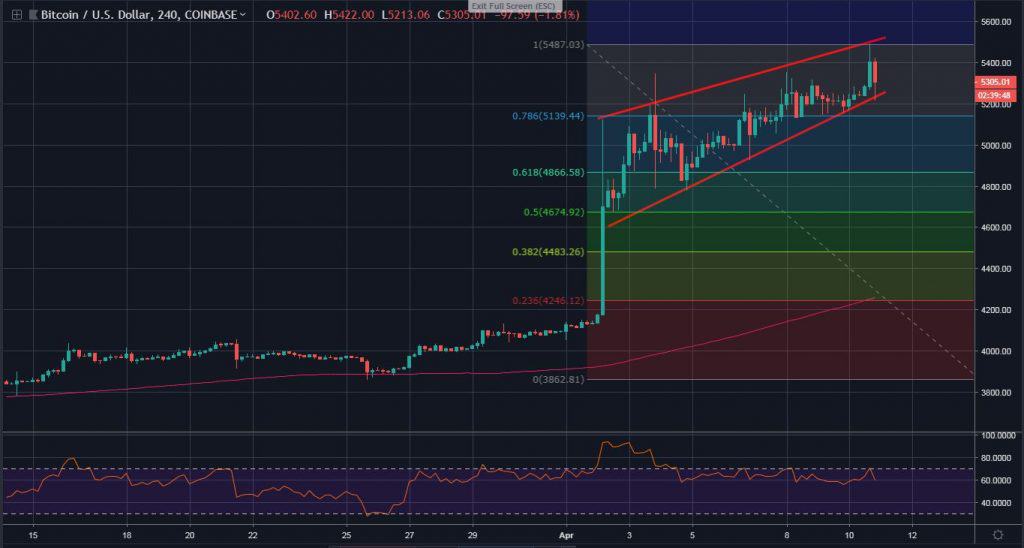 Despite the overbought signal, Bitcoin is still trending high; today, price hits $5400 as a result of increased trading volume with a 3% surge in the last 24-hours of trading. However, the next few days of trading could set the price on a new high or low.

The April 2 surge has clearly push Bitcoin above the red zone of the 0.23 ($4000) Fibonacci Retracement Level. In fact, the breakout was significant over the 200-day moving average, pink line, forming a strong bullish candle. With today’s price increase, the market is above 0.618 ($5236) Fib. level.

On the daily RSI, BTC trading has reached an extremely overbought condition; a possible drop may me experience soon.

As Bitcoin flags up, the 200-day moving average (pink line) is now acting as a solid defensive line for the bulls. After the last week price surge, BTC has actually followed a bullish wedge formation. The price action is getting tighter towards the angle of trend lines; suggesting a possible break.

The 4-hours RSI is now leveled below the 70 line after leaving the overbought territory on April 4. A break above the 1 (5488) Fib. level could propel the bulls to a new high at around $5600 level.

However, a significant break down on the wedge might probably correct Bitcoin to 0.236 ($4245) Fib. level; testing the 200-day MA, atop the red zone. The medium-term RSI should then leveled convincingly at the oversold territory.

Azeez Mustapha is a technical analyst with many years trading experience in the stock exchange and crypto markets. He has broad experience in forex trading, coaching, and funds management.
Forex Brokers:
Note that the content on this site should not be considered investment advice. Investing is speculative. When investing your capital is at risk. This site is not intended for use in jurisdictions in which the trading or investments described are prohibited and should only be used by such persons and in such ways as are legally permitted. Your investment may not qualify for investor protection in your country or state of residence, so please conduct your own due diligence. This website is free for you to use but we may receive commission from the companies we feature on this site.