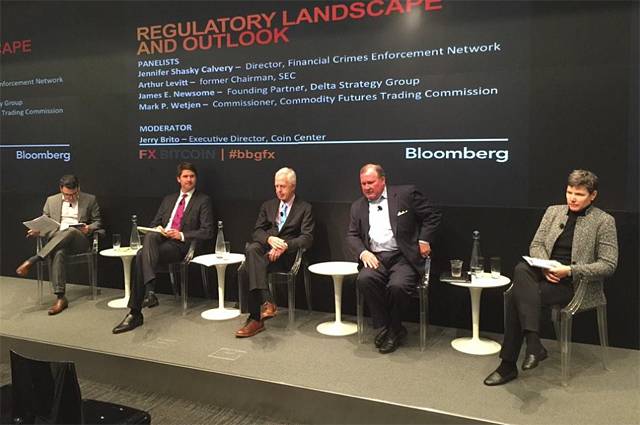 NEW YORK (InsideBitcoins) — There’s a new bitcoin sheriff in town – and it’s a town getting crowded with law enforcement. At the Bloomberg bitcoin conference in New York Monday, Mark P. Wetjen, a commissioner at the Commodity Futures Trading Commission, confirmed that the CFTC had authority over bitcoin and would be responsible for stepping in when there is price manipulation.

“It has not been tested, but I do believe we have the authority because if you think of any reasonable reading of our statute, bitcoin classifies as a commodity. This gives us the authority to bring enforcement against any type of manipulation,” Wetjen explained.

Pull up a chair and get your elbows on the table. There are plenty of people, including the New York Department of Financial Services, the Treasury Department and the Justice Department who want to get in this game.

But Wetjen added that the CFTC currently has no special focus on bitcoin. “We haven’t had to rethink our policies in regard to bitcoin. It is a commodity. That means we have regulatory oversight. We’re looking at all asset classes all the time,” he explained, “and anything that can be manipulated, we have our eyes on — and bitcoin falls into that.”

He did admit that bitcoin is a big topic right now, though, amongst people in the commission. He said not a meeting goes by where bitcoin isn’t brought up.

“Our focus is on preventing money laundering for terrorism, among other things and not knowing the identities of the people involved is troublesome.”

Arthur Levitt, former Chairman of the Securities and Exchange Commission, stepped in and said, “There won’t be a tug of war over who has jurisdiction of bitcoin between the CFTC and SEC.”

Jennifer Shasky Calvery, Director of the Financial Crimes Enforcement Network (FinCEN), said that there are difficulties with bitcoin because it so different from everything else. Her big problem is the fact that the transactions are completely transparent, but who was a part of that transaction isn’t. “Our focus is on preventing money laundering for terrorism, among other things,” she said, “and not knowing the identities of the people involved is troublesome.”

She touched on New York State’s BitLicense and said, “I am heartened by the fact that we have a state like New York, and other states, that are issuing licenses and trying to think through some of these issues.”

One thing she was appreciative of is the more than 100 bitcoin related businesses that had registered with FinCEN. These firms have already been reporting on suspicious activities in their networks. She said that this information has been high quality and that law enforcement has found use for it.

All of this goes back to a theme that Chairman Levitt continued to stress throughout the session: “Regulation does not need to be bad. It can be a stamp of approval.”