The largest cryptocurrency has continued to make positive moves to the upside but struggles below $20K. On September 27, the crypto rebounded above the $18,800 support and rallied to the high of $20,385. Buyers broke above the 21-day line SMA and $20,000 high but could not sustain the bullish momentum above the recent high. BTC price has declined to the bearish trend zone,

Today, Bitcoin’s (BTC) price is rising to revisit its previous highs. This will be the second time within 48 hours, buyers will attempt to keep BTC price above the 21-day line SMA. The bottom line is that the 21-day line SMA must be broken and the bullish momentum is sustained for Bitcoin to regain bullish momentum. This will propel the BTC price to rise above the 50-day line SMA. A subsequent bullish move will enable the coin to revisit the $25,205 overhead resistance. Conversely, if Bitcoin turns down from the moving average lines, the bullish scenario will be invalidated. The bears will attempt to push Bitcoin to the low of $18,675. A break below the current support at $18,675 will signal the resumption of the downtrend.

Korean Authorities Orders To Freeze $67M Tied to Do Kwon

Do Kwon is the co-founder of Terra blockchain developer Terraform Labs. Kwon is on the run from the Korean authorities in the securities violation case. South Korean authorities have asked crypto exchange OKX and Kucoin to freeze 3,313 Bitcoin (BTC) reportedly tied to Do Kwon. According to Cryptoquant, a new BTC wallet has been created under the name of Luna Foundation Guard (LFG), and a total of 3,313 BTC was then transferred to the KuCoin and OKX exchange. The said exchange ignored authorities’ requests. Thus, a total of 1,959 BTC couldn’t be frozen and could have been moved to other platforms. The movement of BTC from the LFG wallet raised many eyebrows as it contradicts Kwon‘s early claims. Kwon claimed he has used the BTC fund to defend the TerraUSD Classic (USTC).

Meanwhile, Bitcoin has continued its upward moves but struggles below $20K. The uptrend may continue if price breaks above the 21-day line SMA. Bitcoin is at level 46 of the Relative Strength Index for period 14. It indicates that Bitcoin is in the bearish trend zone and may further decline. 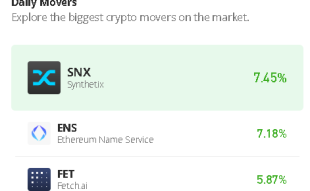