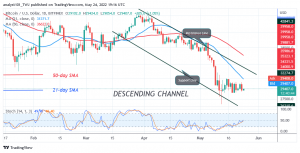 BTC/USD has been in a sideways trend as it holds above $28K for a rebound. Since May 12, Bitcoin traded between $28,000 and $32,000 price levels. BTC price is currently trading in a tight range as the largest cryptocurrency faces selling pressure at the $32,000 resistance zone. BTC price also faces rejection at the 21-day line SMA.

Following the exhaustion of the bearish trend, Bitcoin has resumed a sideways move as it fluctuates between $28,000 and $32,000 price levels. Since May 13, the largest cryptocurrency has hovered between the $28,000 and $30,000 price levels. On May 15, the BTC price rallied to the high of $31,500 but was repelled. Since then buyers have not been able to sustain Bitcoin above the recent high. The crypto has been facing stiff resistance at the $32,000 high.

However, a price rebound above the $28,000 support will break the $32,000 high. Bullish momentum will extend to the previous highs. On the downside; the bulls are strongly defending the $28,000 support. The bears made three attempts on May 18, 20, and 23 to breach the current support but were repelled. Bitcoin will further decline if the $28,000 support is breached

On May 20, a fresh draft of a crypto mining bill appeared in the database of the lower chamber of the Russian parliament. Several changes have been made from the past version, presented by co-sponsors on April 29. For instance, in the draft for a fresh crypto mining bill, an obligation for mining operators to join a special registry and a one-year tax amnesty for all those who have registered have been dropped. The argument is that the previous draft would lead to federal budget losses. Nonetheless, despite the several changes to the original bill, the original text remains unchanged. In the current version, to start mining, crypto mining firms should register as sole proprietors or self-employed. The companies would follow a standard procedure for corporate registration.

Given the recent sideways move, Bitcoin is consolidating above $28K for a rebound. The largest cryptocurrency is confined in range. Meanwhile, on May 12 downtrend; a retraced candlestick body tested the 78.6% Fibonacci retracement level. The retracement indicates that Bitcoin will further decline to 1.272 Fibonacci extension or $20,896.21. 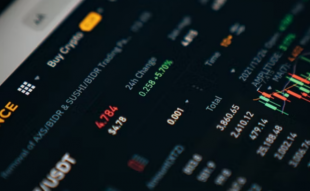