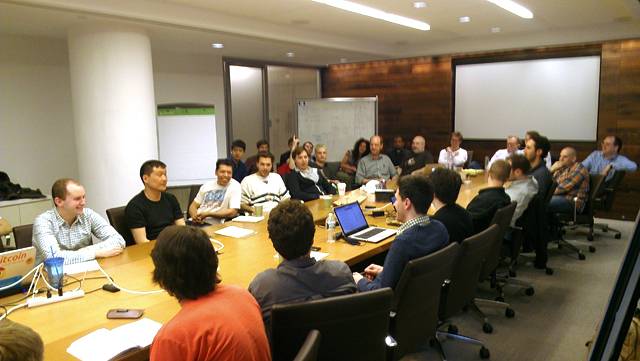 NEW YORK (InsideBitcoins) — After a period of inactivity, the Bitcoin Meetup NYC is being brought out of hiatus with an event Wednesday evening. With the reigns passed to My Coin Solution, a consulting/startup specializing in helping businesses accept bitcoin — and with over 1,500 members — this event should prove to be interesting.

Bitcoin Meetup NYC was launched by Jonathan Mohan back in 2013. The group started having events in March ‘13 and continued to meet once or twice a week to discuss different topics regarding Bitcoin.  In an email interview, David Drexler, director of communications for My Coin Solution, told InsideBitcoins that the torch was passed to My Coin Solution because, “Founder Jonathan Mohan got busy with another Bitcoin project.”

Drexler said that because the event hasn’t been held in a while, there were going to be a lot of topics covered. Specifically, they plan to discuss recent developments such as the BitLicense proposed regulations, the 51% attack, and the record money being invested by VCs.

Many bitcoin veterans come to the event, but Drexler said that, “How many newbies come is always impossible to predict since they are often plus ones.”

By covering the very basics of Bitcoin, it opens up the opportunity for introducing Bitcoin to more people. If looking at founder Jonathan Mohan’s Twitter description is any clue, his goal was to do “everything in our power to move Bitcoin from geek to profitable.”

The event will be held from Wednesday, August 13th from 7-9 p.m. in the We Create space at 58 E. 11th Street, 8th  floor and is open to everyone. Membership is completely free.