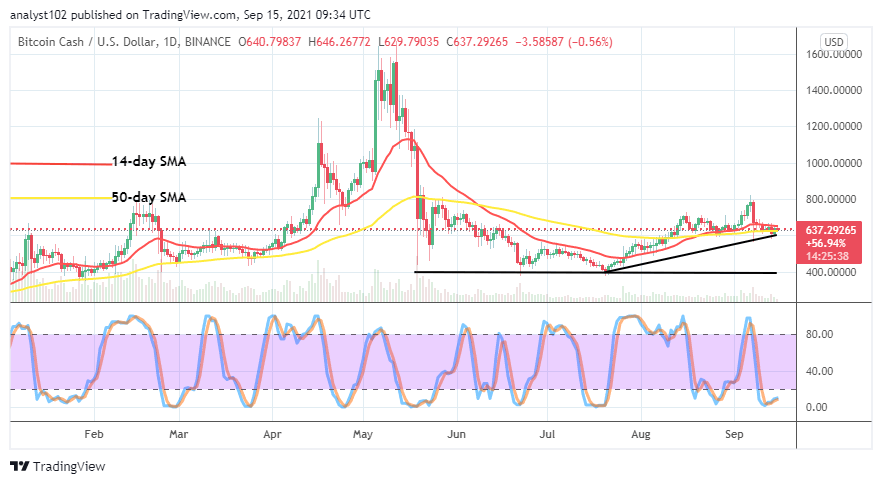 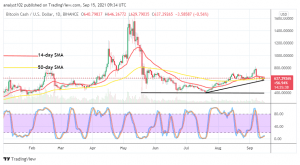 BCH Price Ranges Above $600 – September 15
It is on the financial record book of the BCH/USD market that its price ranges above $600 level. The crypto market’s percentage rate of trading is observed at about a smaller negative 0.56 as it trades around the level of $637. It shows that the crypto coin is still relatively debasing as been trade with the US fiat currency.

BCH/USD – Daily Chart
The BCH/USD daily chart has revealed that the crypto-economic trade price ranges above the $600 line. Meanwhile, the $800 value line appears, bordering the upper range level as the point mentioned earlier borders the lower range zone of the current trading situation of the market. Both the SMA trend lines are around the current trading area. The 14-day SMA indicator is closely over the 50-day SMA indicator as the bullish trend line is drawn beneath them, providing support. The Stochastic Oscillators are in the oversold region with closed lines near over the range of zero. That portends that the base instrument may seize, succumbing freely to any further possible pressures that the counter tool intends to inflict upon it in the near time.

Will there be continued ranging movements in the BCH/USD market as price ranges above $600?

There be a continued ranging movement around the $600 as the BCH/USD market’s price ranges above $600 presently. From the technical look of things, bulls may still lessen the energy slightly around the point for a while. Variant smaller candlesticks characterized as lower lows will have to form for some time before a bullish candlestick can emerge to signify a return of an uptrend out of the range trading zones.

On the downside, a sudden breakdown of $600 may cause interception of the bigger SMA by the smaller SMA to the downside. And, while that happens, the crypto market may find a sit between lower range trading zones of $600 and $400. However, it is not ideally encouraged that bears follow the presumed downward force without strictly taking to the law of trading principles. 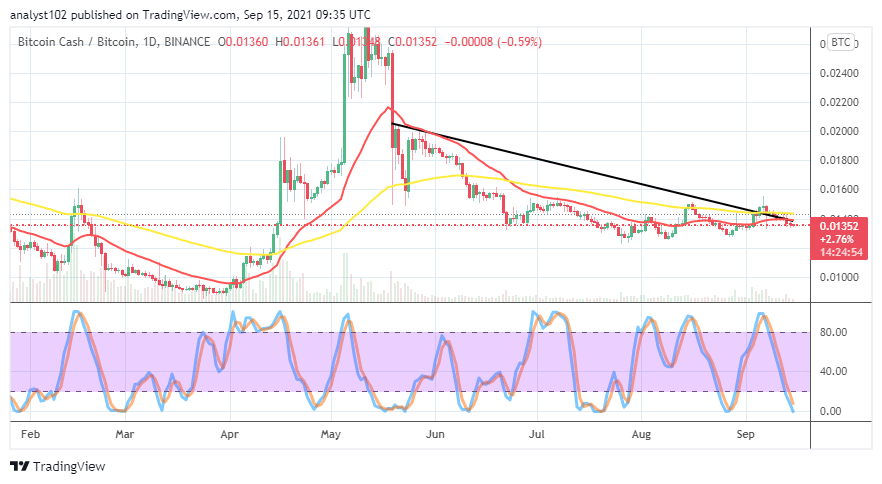 In comparison, there is a sign that the cryptocurrency pair trade’s price ranges around the indicators to the southward. It depicts on the BCH/BTC price analysis chart that the base crypto is yet to come out of the pressure put on it by the counter crypto. The 50-day SMA indicator is closely over the 14-day SMA indicator. The Stochastic oscillators have moved southbound to touch the range line of zero. Bitcoin Cash may continually witness more low efforts in pushing against Bitcoin in the meantime.

All cryptocurrencies are storage platforms. That’s because, at the very least, pretty much all ...