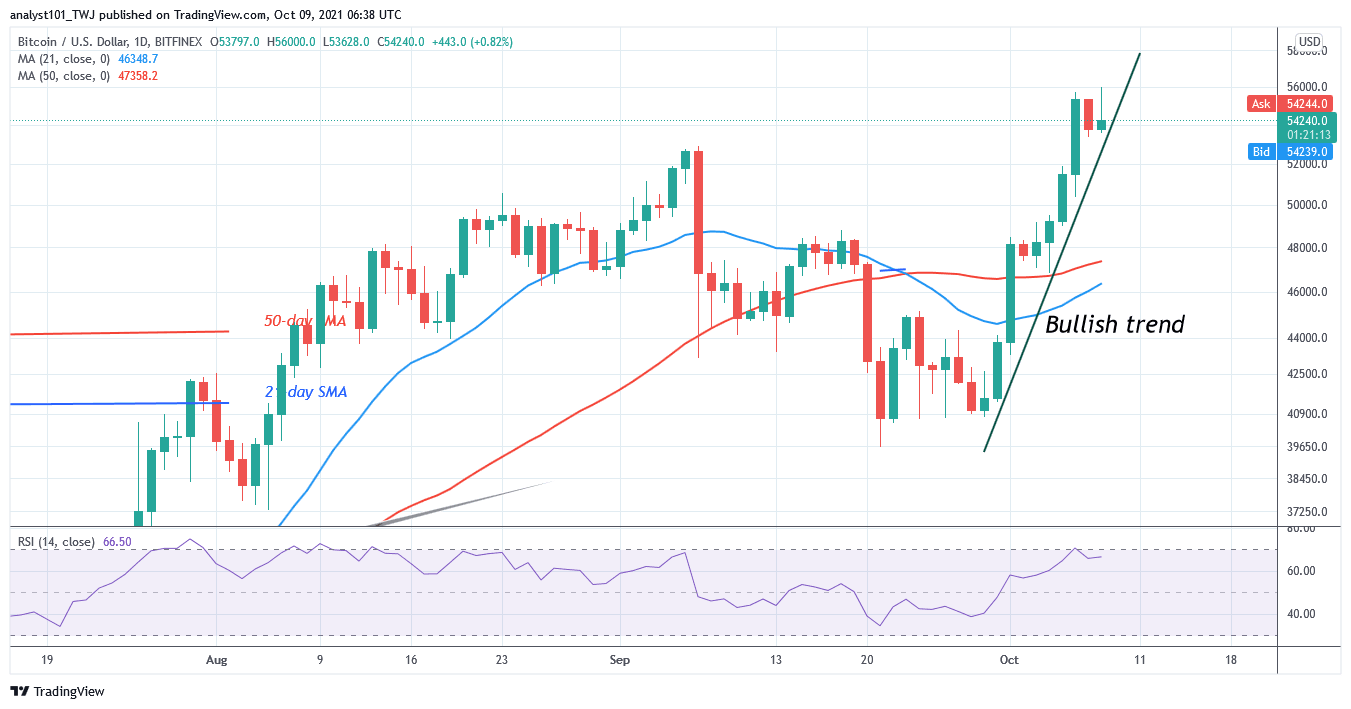 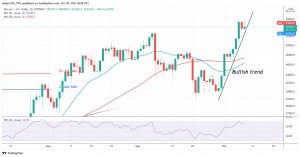 Since October 6, buyers have retested the $56,000 resistance zone on three occasions as Bitcoin eyes $60k high. In two subsequent retests, buyers were repelled as the crypto declined to $53,800 low. On each occasion, the bulls buy the dips as BTC/USD resumes the upward move. Today, BTC’s price is falling after retesting the $56,000 resistance. Bitcoin is trading at $54,119 at the time of writing.

Following the October 6 rebound, BTC price has been trading below the $56,000 resistance zone. Buyers have retested the resistance zone on two occasions but were repelled. Today the bulls are making attempt to break above the recent high. However, the Relative Strength Index has indicated that the crypto has reached bullish exhaustion. Bitcoin has reached level 67 of RSI and has no room to rally on the upside. Further upside is doubtful as Bitcoin approaches the overbought region.

Mike McGlone is Bloomberg’s senior commodity strategist. According to Mike McGlone, Bitcoin’s meteoric rose above $50,000 this week and is likely to continue well into the fourth quarter. Meanwhile, the report has it those traditional risk assets such as stocks tumbled as the dollar rose. The commodity strategist circulated the October 2021 edition of the Bloomberg Galaxy Crypto Index. The October 2021 edition of the magazine provided an overview of where digital assets could be headed for the rest of the year. Mike McGlone indicated this in his report, adding: “We view the $40,000 mark as similar to the crypto’s $10,000 launch pad from 4Q20. Parallels are visible from about 4x higher. The 2021 average price is $44,500, and adoption and demand are on the rise vs. diminishing supply.”

Meanwhile, for the past five days, Bitcoin has been fluctuating between $54,000 and $56,000 price levels as Bitcoin eyes $60k high.The Fibonacci tool has indicated a possible move of BTC price. Meanwhile, on October 6 uptrend; a retraced candle body tested the 78.6% Fibonacci retracement level. The retracement indicates that DOT price will rise but will reverse to level 1.272 Fibonacci extensions or $58,121.20