On March 28 and 29, the bulls retested the $48,000 resistance levels as Bitcoin declines to $45.4K. BTC/USD has declined below the $47,000 support as the market resumed fluctuations. However, the price action is characterized by the appearance of small body candlesticks called Doji.

Following the rejection at the $48,000 resistance, the BTC price has declined and resumed a sideways move below the resistance zone. The largest cryptocurrency was fluctuating between $46,400 and $48,000 price levels. The resistance and the support levels have been retested twice as the market continues its fluctuations. On the upside, if the bulls breach the resistance at $48, 000, Bitcoin will rally to the $50,000 psychological price level. The market will resume upside momentum. On the downside, if the bears break below the $46,400 support, BTC/USD will decline and revisit the previous breakout level of $45,400. Nonetheless, Bitcoin will regain bullish momentum if it retraces above the $45,400 support or above the moving averages.

Citizens School is located in the heart of Dubai and is structured as an international school. It is available to students between the ages of 3 to 11. Citizens School tuition costs as from 45,000 AED to 65,000 AED per year ($12,250 to $17,700) before VAT and per annum. The management intends to integrate blockchain technology into several aspects of its academic and administrative operations in the future. Students can pay in Bitcoin (BTC) or Ethereum (ETH) which are facilitated via an unnamed processing platform. The digital assets are automatically converted into United Arab Emirates Dirhams (AED). The founder of Citizens School is Dr. Adil Alzarooni, who commented as thus: “We look forward to enhancing the role of young generations in achieving the UAE’s digital economy. As more people embrace the era of digitalization, today’s children will become the entrepreneurs and investors of tomorrow.”

Today, BTC/USD  has resumed selling pressure as Bitcoin declines to $45.4K. Nevertheless, the selling pressure may persist until the cryptocurrency reaches $45,400 low. Alternatively, the uptrend will resume, if the $46,400 support holds. 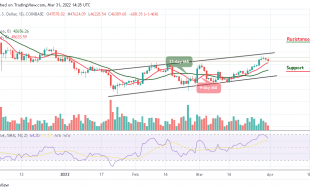