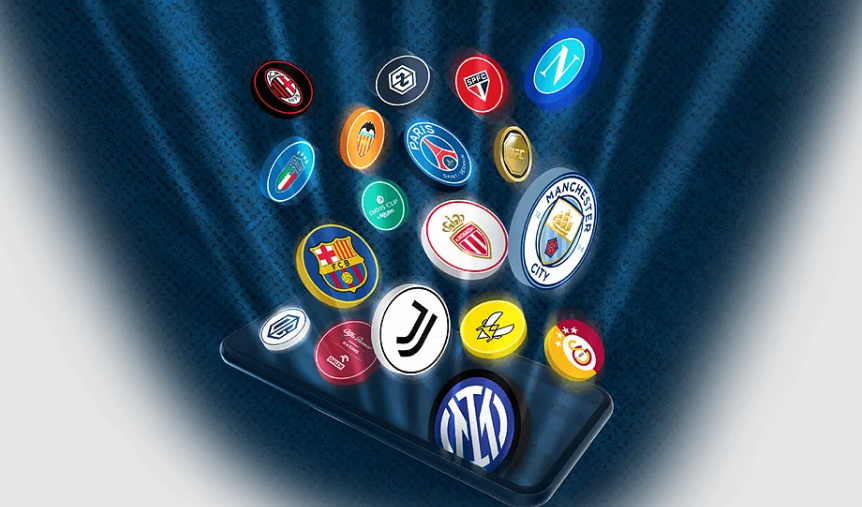 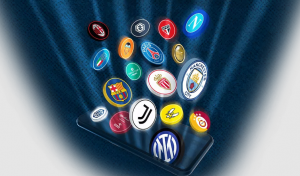 It has been evident that the cryptocurrency market has been trying to regain price and trading volume over the past couple of weeks. The blockchain industry has been suffering since its major crash back in 2021 when BTC fell from its all-time high of more than $67,000 to the current $20,000 price level.

Recently, there has been much volatility in the market, which has mostly been bullish in nature. While the market has been keeping investors on their toes, a majority of them have been looking to park their funds in high-potential projects. Several major projects have been spiking in prices for the same reason lately.

Listed below are 10 of the latest top gainers across various exchanges like eToro and Binance.

Launched by the top cryptocurrency exchange Binance, LAZIO is a fan token. Since fan tokens became popular, Socios was the sole company to launch several of these digital assets successfully. However, this fan token from Binance also made its way to becoming one of the top fans tokens in the space. 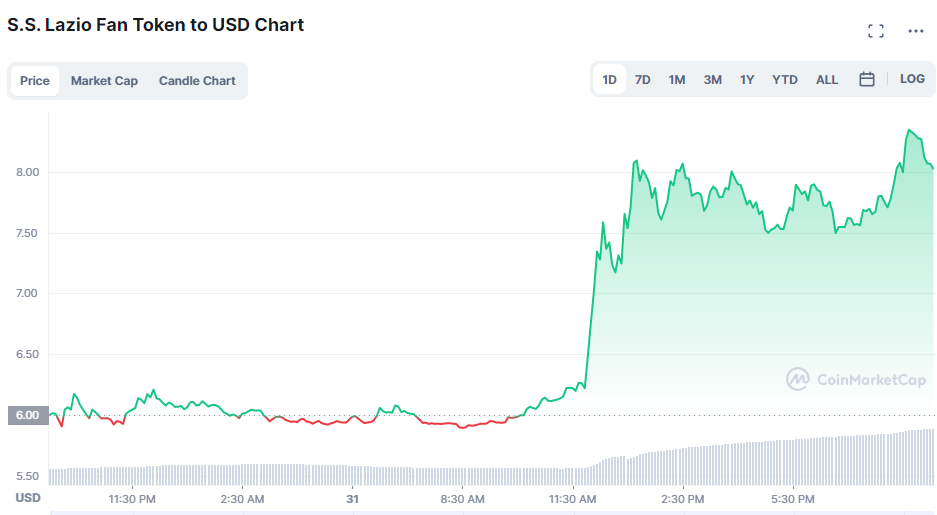 The project is created to nurture relationships between the players and their fans, by providing them with several benefits and perks to engage with the club. In this case, it is the famed S.S Lazio Club, which is one of the most prestigious football clubs based in Italy.

The LAZIO token has grown immensely last week and also saw a huge spike in price within just one day, where the token went from being worth about $5.17 to more than $7.5 with a market cap of $66 million.

Porto is also a major fan token that was launched in 2021 on the Binance Launchpad. It too, similar to LAZIO has managed to climb the fan token ladder and become a token that has been on a huge number of investors’ watchlists. 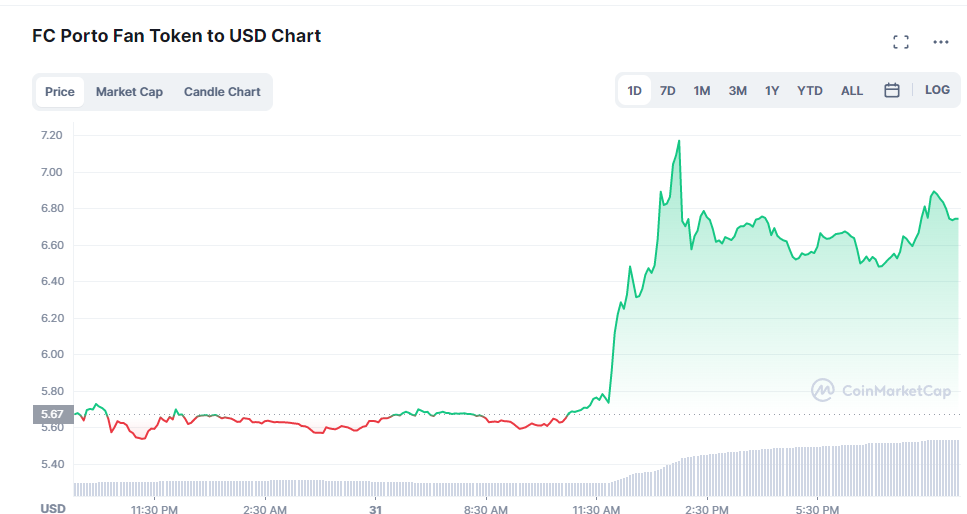 PORTO token aims to create uniqueness within its ecosystem by bringing in more interaction, participation and monetization opportunities to both- the clubs and fans.

Launched in 2017, Neblio was created to simplify blockchain for developers or anyone looking to participate in the space. The project serves as a secure and distributed platform for enterprise services and applications. Neblio was founded by Edward Smith and Annette Jackson. 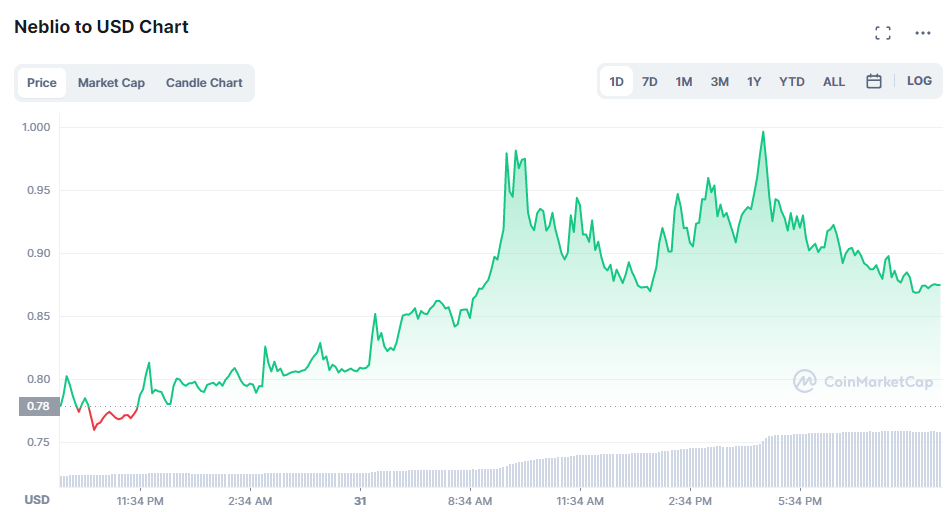 Neblio boasts of an extensive API collection that allows developers to intuitively interact with the network without understanding the complex details of building projects on a blockchain. The SDKs make it easier for developers to use languages required for building the infrastructure for their projects.

As a token that had a considerable price hike way back in 2018, NEBL had been dormant till the last bull run. However, it fell back right again and was trading at $0.2 about a month ago. NEBL has now gone up in price exponentially and is trading at around $0.91 up almost 16% in one day.

Launched in 2017, Nexo was founded by Antoni Trenchev and Kosta Kantchev. Based in London, the company is backed by top investors like Arrington XRP Capital. Nexo simplified, is a cryptocurrency lending platform. It provides instantaneous loans and accepts tokens like BTC, ETH, XRP, LTC etc. 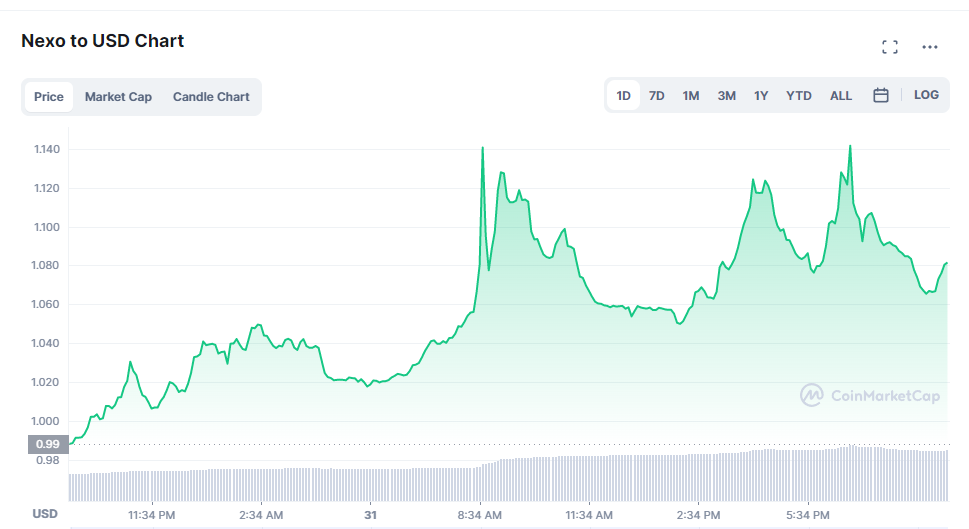 NEXO acts as the platform’s native token. It provides discounts, interests on deposited tokens and dividends from the company’s profits for the holders. With recent developments like a crypto credit card launch and more, the token has been seeing an increase in value.

Luna Classic is a project that almost every cryptocurrency enthusiast would be familiar with. Previously considered one of the top cryptocurrencies in the world, Luna was founded by Daniel Shin and Do Kwon. Luna was built as the native token of Terra, a Korea-based Blockchain network. 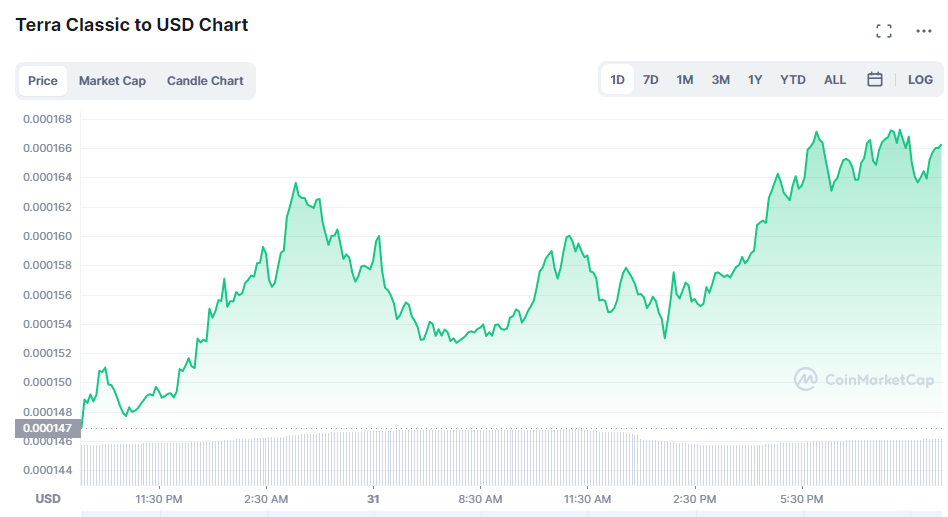 However, a crash in 2022 that was widely popular in the industry, brought down the token’s value by more than 99.99%. However, a dedicated community and company may end up rebuilding the once top project. Speculating the same, investors have been buying LUNC(previously LUNA) causing its price to increase.

At the time of writing, LUNC is trading around 12% higher than yesterday, with a price around $0.00016 with a market cap of $1 billion.

ATM is one among the several fan tokens that have risen in price considerably. ATM, along with the aforementioned fan tokens are likely rising in price, thanks to the various major football leagues that are to happen in the upcoming weeks. 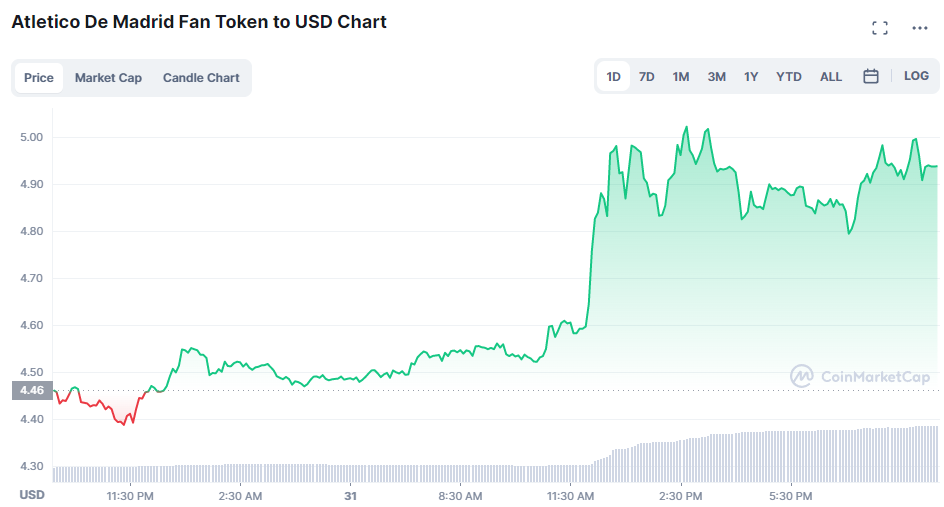 Athletico De Madrid Fan Token is a project introduced by the original fan token creator Socios.com, which is powered by Chilliz. ATM holders are entitled to exclusive benefits and perks from the club and have opportunities to maintain a much closer relationship with the club. Currently, the ATM token is among the top gainers, with a price of around $4.9.

SANTOS is the second largest fan token in the space now and was built by Binance. The club is based in Brazil and has been around for more than 110 years, making it one of the most valuable clubs in Brazil. The SANTOS token was built through a partnership between the club and Binance in November 2021. 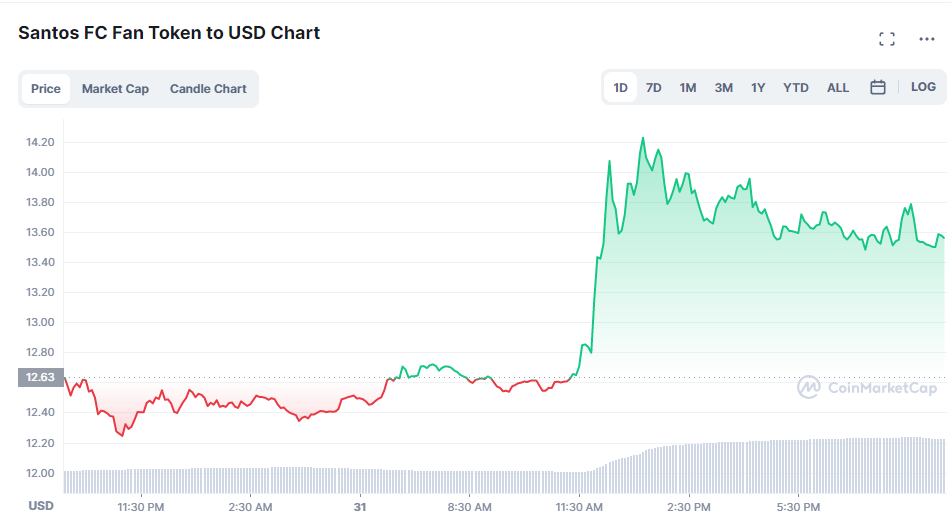 SANTOS tokens allow holders to take part in the decision-making process of the club to some level. They can decide certain aspects of the team functioning like the colour of jerseys, team bus and more. They also have several exclusive benefits and perks along with interaction opportunities with their favourite players.

SANTOS is currently trading at around $13.7 with a market cap of around $62 million.

Launched in 2017 by Alexandre Dreyfus, CHZ is the exclusive digital currency of the Socios.com platform. As mentioned several times above, Socios is the top platform for fan tokens and is the first company to come up with such an innovative idea. 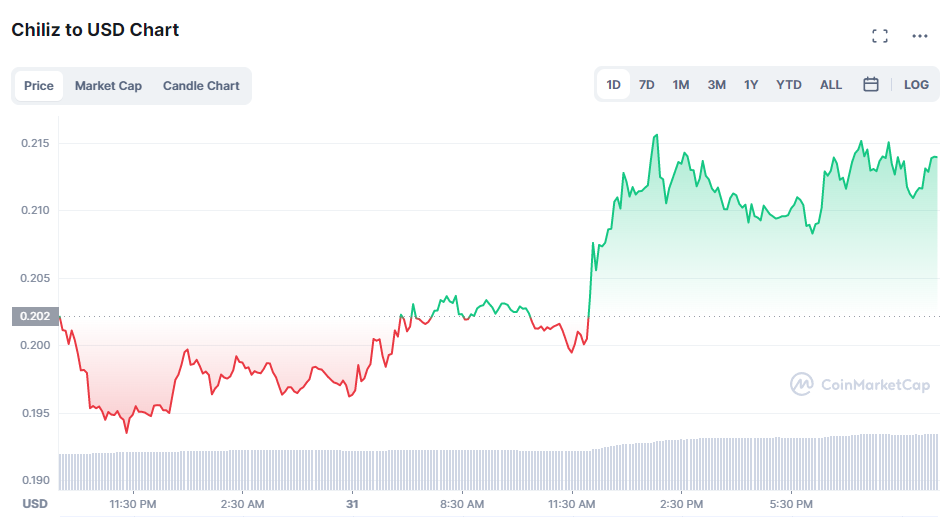 CHZ is a token that users have to buy to purchase fan tokens. While these may eventually be available on CEXs, the FTOs or Fan Token Offerings only allow purchases using CHZ. Chilliz developers have been aiming to increase utility functions for the token, even though it is the most sought-after cryptocurrency among sports enthusiasts who wish to get into fan tokens.

Launched in January 2020, Curve caters to its investors as a decentralized exchange by using AMM or an automated market maker to manage liquidity. The project was founded by Michael Egorov, a Russian scientist with extensive blockchain tech experience. 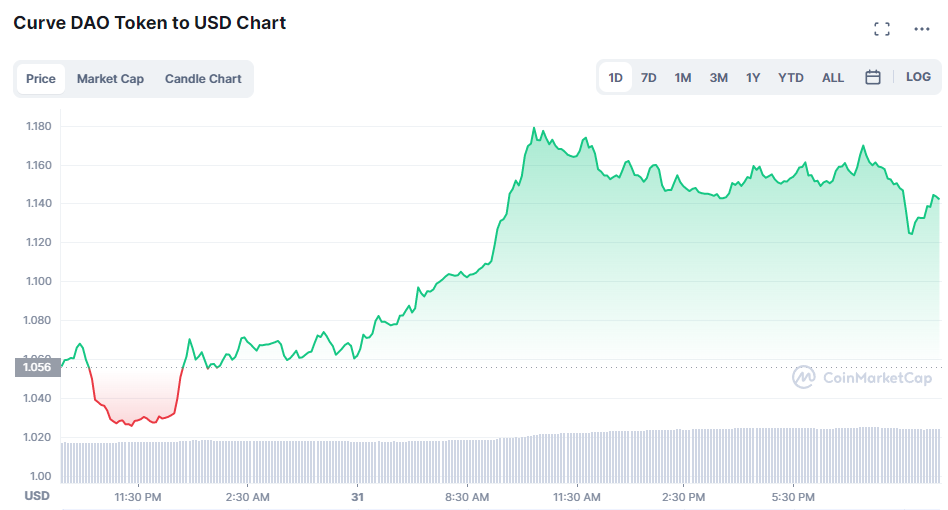 Those interested in DeFi activities such as yield farming and liquidity mining are welcomed by the developers to use Curve. Curve also caters to those looking to maximize their returns without taking on any risk by investing in notionally nonvolatile stablecoins. By charging liquidity providers a modest fee, the platform makes money.

CRV is the native token of the Curve DAO ecosystem and is trading at around $1.13, up about 8% from yesterday.

Created as a liquid staking solution for Ethereum, Lido DAO was launched in 2020 by Jordan Fish. Using Lido, users can stake their ETH with no minimum deposits or infrastructure maintenance, to compound their returns while participating in on-chain activities, such as lending. 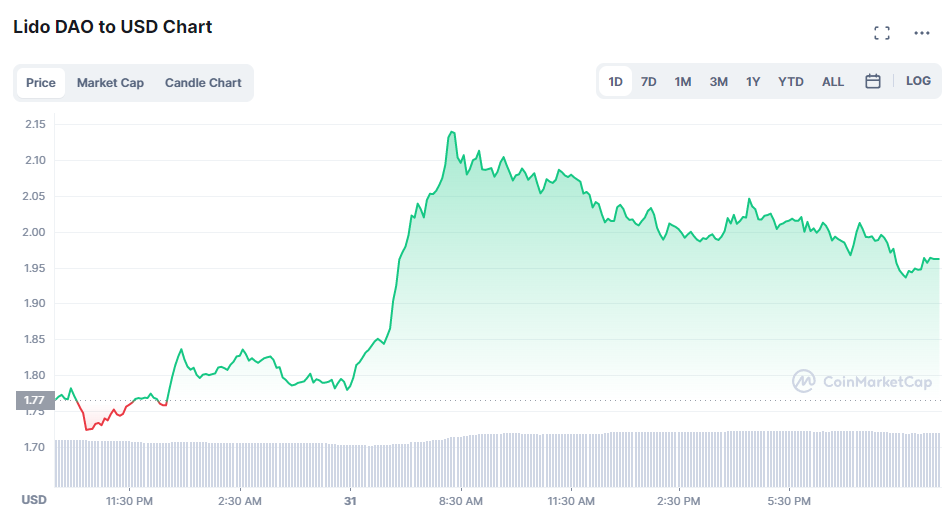 LDO is the project’s native token and is used to grant governance rights to users. It also managed fee parameters and governs the addition and removal of Lido node operators.

Due to recent developments and speculation of major growth in the project, the price of LDO has been growing considerably. It is also likely that LDO, along with many other mentioned projects that have something to do with Ethereum may be rising due to speculation of growth in the industry post-Ethereum’s merge.

While these are some of the top gainers in the space currently, they may likely be exposed to massive volatility, which will determine long-term prices. 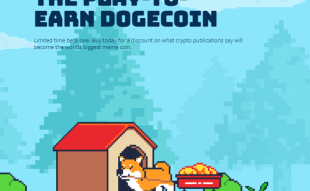 4 Crypto Games with Strong Fundamentals to Trade through the Crash

Join Our Telegram channel to stay up to date on breaking news coverage Games ...